Music History Mondays: Too Many Birthdays! 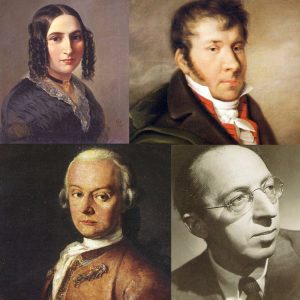 I began this “Music History Monday” project by scouring the Web for musical events from which I assembled a master list of what happened in the world of Western concert music on each of the year’s 366 days. (Indeed: 366; we cannot forget February 29. And yes, February 29 is a significant date in the history of Western concert music. Since February 29 will not again fall on a Monday until 2044, I don’t mind spilling those leap year beans right now: On February 29, 1792, the extraordinary Italian opera composer Gioachino Antonio Rossini was born in Pesaro, Italy. In his 76 years, the poor dude managed to celebrate only 19 birthdays!)

My master list catalogs over a thousand noteworthy musical events. On most Mondays I have two or three events to choose between, although – every now and then – there are Mondays during which nothing noteworthy happened: nada, niente, zilch, zed, zero. Monday, September 19, 2016 was just such a day. Yes, many other noteworthy things occurred on September 19, among them: on September 19, 1870 the Prussian Army laid siege to Paris; on September 19, 1893, New Zealand became the first country to grant all women the right to vote; on September 19 1982, Scott Fahlman – a computer scientist at Carnegie Mellon University – became the first person to use ” :-)” in an online message. September 19 is also a rich day in the history of Rock ‘n’ Roll. For example, on September 19, 2008, the English singer, songwriter, and record producer George Michael was arrested in a public toilet in the Hampstead Heath district of London for possession of “Class A and Class C drugs.” (Tylenol? Alka Seltzer?) He was taken to a local police station where he was cautioned about his use of controlled substances and released. Wow; that’s history.

So in the absence of a notable concert music event on Monday, September 16, I wrote a post that had nothing to do with the date.

Sometimes the opposite is true: there are some days during which so many important musical events took place that choosing one is difficult. Ordinarily I am a fairly good decider (thank you Bush 43 for putting THAT word in the lexicon), but today’s date – November 14 – is a humdinger, a date that features four – count ‘em, four – significant musical birthdays: those of Leopold Mozart, Johann Nepomuk Hummel, Fanny Mendelssohn-Hensel, and Aaron Copland.

A few words, then, about each of these luminaries.

Leopold Mozart was born on November 14, 1719 in Augsburg (today in Germany) and died on May 28, 1787 in Salzburg (today in Austria). Leopold was a noted violinist, composer, pedant and conductor, but he made his greatest contribution to music with his testicles, when he impregnated his wife Anna Maria and by doing so fathered the crazy-amazing Wolfgang Gottlieb (aka Amadé; Amadeus) Mozart in 1756. The good news: Leopold recognized his son’s genius and gave him what was arguably the best music education of all time. The bad news: Leopold was the ultimate tennis father AND tiger mama; he shamelessly exploited, harried, and harangued his son and in the process created the most troubling parent-child relationship this side of Oedipus and his mother Jocasta.

Johann Nepomuk Hummel was born in Pressburg (today Bratislava, the capital of Slovakia) on November 14, 1778 and died on October 17, 1837 in Weimar (Germany). Hummel – no relation to those saccharine figurines – was a virtuoso pianist and an excellent composer. A good friend of Beethoven’s and considered by many his equal as a pianist and composer, Hummel played at Beethoven’s memorial concert as per Beethoven’s dying request. History has been unkind to Hummel and it’s time for a revival, darn it! As I write this I am listening to his superb Piano Concerto No. 3 in B Minor, Op. 89 (1819) as performed by Stephen Hough and the English Chamber Orchestra (Chandos). It is a killer performance of a killer piece. Revival! Revival!

Fanny Mendelssohn-Hensel was born on November 14, 1805 in Hamburg and died May 14, 1847 in Berlin. Fanny Mendelssohn’s greatest fame rests on being the elder sister of the spectacular Felix Mendelssohn, which is a crying shame. Not because they had a bad relationship; the opposite is true: Fanny was Felix’s soul mate, his best friend, his confident and his muse. It’s a shame because she deserves to be famous in her own right. An outstanding pianist and more than capable composer (she wrote over 460 pieces of music in her short lifetime), her potential was off the charts. But she lived at the wrong time and place, and had to contend not with a glass ceiling but one made of tungsten steel. Fulfilling the role that was expected of her, she married, had a child, kept house, and was forced by the societal code of her time to treat her music as a hobby rather than as a vocation.

Aaron Copland was born on November 14, 1900 in Brooklyn, N.Y. and died on December 2, in Tarrytown, N.Y. Copland, of course, deserves an entire post all by his lonesome. He is, arguably, the single most important and representative American composer of the twentieth century. I will find some excuse to write more extensively about him rather sooner than later.
In the meantime, hats off to the birthday boys and girl.