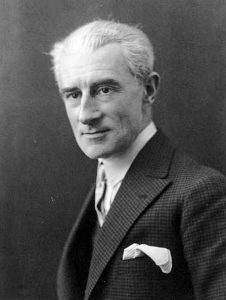 On this day in 1928, Maurice Ravel’s one-movement orchestra work Boléro received its premiere at the Opera Comique in Paris with Ravel conducting. (Various sources variously describe the premiere as having taken place on November 20, November 21, and November 22! We are splitting the difference and going with the 21st.)

Boléro was commissioned by the Russian ballerina Ida Rubinstein, whose choreography that opening night followed this scenario:

“Inside a tavern in Spain, people dance beneath the brass lamp hung from the ceiling. In response to the cheers to join in, the female dancer has leapt onto the long table and her steps become more and more animated.”

That’s not much of a scenario, and Ravel responded with not much of a musical composition. Boléro begins with a rhythm presented by a side or snare drum. (While it’s usually the other instrumental soloists who take the bows after a performance, it should be the hapless drummer who gets the huzzahs, for having to play the same freaking two-measure rhythm for 17 minutes!)

Stacked atop the drum rhythm are two vaguely “Spanish” sounding melodies – each 18 measures long – that alternate with one another. And that’s it. Over time, more and more instruments enter playing the same stuff over and over again; like some sort of wind-up mechanism the music just keeps going, getting louder and louder until it stops.

Maurice Ravel himself didn’t think much of Boléro.

“It constitutes an experiment in a very limited direction. There are no contrasts, and there is practically no invention except the plan. The themes are altogether impersonal – folk tunes of the usual Spanish Arabian kind.”

In July, 1931 he told the newspaper The Daily Telegraph that:

“Before its first performance, I issued a warning to the effect that what I had written was a piece lasting seventeen minutes and consisting wholly of “orchestral tissue without music” — of one very long, gradual crescendo.”

A story circulated that at the premiere performance a woman in the audience kept shouting to Ravel “Au fou, au fou!” (“The madman! The madman!”) Ravel is said to have remarked that at least someone had understood the piece.

Maurice Ravel was clearly a bit embarrassed by Boléro and predicted that most orchestras would simply refuse to play it. Boy, was he wrong. It became sensationally popular almost overnight and became a favorite concert work on both sides of the Atlantic. Boléro was recorded 25 times in the 1930s alone! To this day, it remains Ravel’s most famous, most profitable, and most frequently perfumed work.

Generally but accurately speaking, the vast majority of composers want people to like their music. Yes, sometimes composers of more difficult music will get defensive and blurt out things like “who cares if you listen?!?” (Which happens to be the title of an article published in February, 1958 by the composer Milton Babbitt.) And yes, some post-World War Two compositional modernists went so far as to believe that any interaction with a listening audience that was not a disaster actually defiled the composer. For example, according to the German sociologist, philosopher, pianist and composer Theodore Adorno (1903-1969) the job of a composer was to write music that would repel, shock, and be the vehicle for ‘unmitigated cruelty’.”

Still, such compositional whack-jobs aside, most composers want their music to be liked and understood. Which poses a bit of a conundrum – as it certainly did for Ravel – when a composer realizes that his worst piece of music happens to be his most popular piece of music.

Ravel’s conundrum – “should I tell everyone that relative to my best work Boléro is trash, or should I just keep my trap shut, nod my thanks, and take the money?” – was not unique. Off the top of my head I can think of a number of composers who had to deal with the same issue, the most glaring of whom are Tchaikovsky and Beethoven.

Tchaikovsky composed the 1812 Overture – which was originally known as The Year 1812 – in 1880, to mark the consecration of the Cathedral of Christ the Savior in Moscow. Some sources say it took him six weeks to write the overture; others say he churned it out in under a week. Given the compositional content of the overture, one is disposed to believe the latter. Certainly Tchaikovsky thought very little of the piece; immediately upon finishing it he informed his friend and benefactor Nadezda von Meck that:

“The 1812 Overture will be very loud and noisy, but I wrote it without any warm feelings of love so it will probably be of no artistic worth.”

When the church consecration for which Tchaikovsky had composed the 1812 Overture was delayed, he offered the piece to Eduard Napravnik, the conductor of the Imperial Mariinsky Theater in Saint Petersburg. In his cover letter to Napravnik, Tchaikovsky warned:

“I don’t think the piece has any serious merits, and I shan’t be the slightest bit surprised or offended if you find it unsuitable for concert performance.”

Napravnik did indeed find the work “unsuitable” and politely declined Tchaikovsky’s offer to perform it. The overture finally received its premiere on August 20, 1882 in Moscow, and the rest is history. It made Tchaikovsky a rich man, and has been, since the day of its premiere, Tchaikovsky’s best know, best loved, and most frequently played work.

Beethoven’s orchestra work Wellington’s Victory was, in his lifetime, his single most popular and profitable work. Artistically is a first-class train wreck: without any doubt the worst “major” piece of music ever written by a major composer, offering up more tedium than a “Gilligan’s Island” retrospective.

Wellington’s Victory was composed in 1813, during the heady days that preceded the end of Napoleon. Its popularity was not rooted in its artistic quality but rather, in Austrian pride and patriotism that Beethoven briefly came to embody.

By the 1820s, the patriotic hoopla that had made Wellington’s Victory so popular in 1813 and 1814 had dissipated entirely and it came to be seen for what it was. In 1825, the well-known German music theorist and composer Gottfried Weber wrote the following about Wellington’s Victory in the influential journal Cecilia:

“Should not everyone, the dearer Beethoven and his art are to him, fervently wish that oblivion might very soon draw an expiatory veil on such an aberration of [Beethoven’s] muse, through which he has desecrated the glorified object – art – and himself?”

Beethoven, who darn well knew that Wellington’s Victory was dreck, refused to accept Gottfried Weber heartfelt criticism. So he wrote Weber this measured response: “Ach du erbarmlicher Schuft, was ich Scheisse, ist besser, als wie du jegedacht.” (“Ah, you pitiful scoundrel, my s**t is better than anything you ever thought!”)