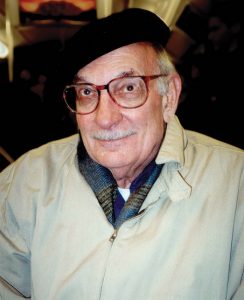 A most happy birthday to the iconic American composer George Crumb, who was born in Charleston, West Virginia 87 years ago today.

Youth is indeed wasted on the young. One of the many wonderful things about being a kid (and here I’m talking about anyone under the age of 25) is the revelatory, earth-shaking, full-contact emotional body slam that comes from discovering something new. And since most everything is new for young ‘uns, the pace of such revelations can be daily, creating a level of existential excitement that an old fart like me can only look upon with melancholic envy. (I would note that this “excitement of discovery” doesn’t necessarily provoke a positive response. I remember well when my daughter Lily—the third of my four kids—first tasted ice cream. She was about 18 months old; her eyes rolled back in her head and a beatific smile crossed her face when suddenly she fixed me, her father, whose loins contributed to giving her life, with a death glare that Medusa herself would have envied. I understood immediately what she was thinking: “you rotten b*stard, I’ve been alive for a year-and-a-half and you’ve only now allowed me to taste this bit of heaven? You’ll pay, old man, you’ll pay.”)

I bring this up because I remember well the seemingly daily revelations—the really over-the-top excitement—I experienced between the ages of 18 and 20 as I discovered the music of the twentieth century. I remember lying in bed in Room A112 of the Princeton Inn Annex during my freshman year, listening on my earphones to a record of Stravinsky’s The Rite of Spring conducted by Ernst Ansermet that I’d bought that day for fifty cents. I was electrified, almost paralyzed by what I heard; it was enough for me to get out of bed and flip the record over, which I must have done five or six times that night. My roommate Rick deSante slept, unaware that I was going just a little crazy just a few feet away. I remember discovering Arnold Schoenberg’s Pierrot Lunaire and feeling as if my universe had just expanded by an order of magnitude (or two or three orders of magnitude!). I remember the revelatory discoveries of Carl Ruggles’ Sun Treader; Milton Babbitt’s Philomel; Aaron Copland’s Piano Variations; Roy Harris’ Symphony No. 3; Olivier Messiaen’s Turangilila Symphony; Béla Bartók’s String Quartets; and a hundred other works. I was—literally—high on music all the time. And I would tell you that no composer’s music was more important in creating and maintaining that high than the music of George Crumb.…