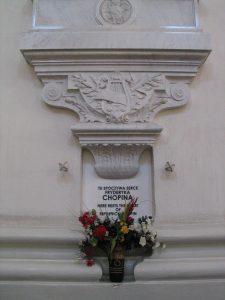 167 years ago today – on October 17, 1849 – the brilliant Polish-born composer Frédéric Chopin died in his apartment in Paris’ très chic Place Vendome. He was 39 years, 6 months, and 16 days old when he died and was attended by Dr. Jean Cruveilhier, France’s leading authority on tuberculosis. A few months before his death, Dr. Cruveilhier had diagnosed Chopin with tuberculosis, and Cruveilhier ascribed TB as the cause of Chopin’s death on his death certificate.

There was a certain tragic romance associated with tuberculosis in nineteenth century Europe. Dubbed the “White Plague”, TB was thought to imbue its victims with a heightened artistic sensibility. Reflecting on just this, the prototypical Romantic poet Lord George Gordon Byron, wrote, “I should like to die from consumption.” (He didn’t; he died of a septic infection at the age of 36. No romance there at all.) In a letter to a friend, George Sand wrote of her beloved Frédéric Chopin, “Chopin coughs with infinite grace.” So idealized was the “spiritual purity” tuberculosis presumably bestowed on its sufferers that it became stylish for mid-nineteenth century women to affect the appearance of a consumptive by making their skin as pale as possible. (As fashion statements go, this one makes about as much sense as the prison inmate-inspired practice of wearing your pants down around your knees.) Tragic consumptives were frequently portrayed in nineteenth century literature and opera; both Verdi’s La Traviata (1853) and Puccini’s La bohème (1896) feature consumptive heroines.

While on his deathbed, Chopin had indicated that after his death he wanted his heart returned to Poland (thus establishing a precedent for Tony Bennett’s coronary leave-behind in San Francisco). In fulfilling Chopin’s request, Dr. Cruveilhier removed and set aside Chopin’s heart during his autopsy. And while the good doctor’s autopsy notes have been lost, it was reported that something he observed during the autopsy made him doubt his original diagnosis of tuberculosis. Over time, then, other theories as to the possible cause of Chopin’s death have emerged. One of them suggests that cystic fibrosis – which was unknown in 1849 – was the cause of Chopin’s death; another claims that Chopin had inherited a form of emphysema: Alpha-1-antitrypsin deficiency.

In an attempt to solve the mystery of Chopin’s cause-of-death once and for all, a team of genetic and forensic experts examined Chopin’s heart in April of 2014. The heart sits in a crystal jar filled with alcohol (probably cognac), which is encased in a column in Warsaw’s Church of the Holy Cross. In September of 2014 the scientists issued their report: Chopin’s well-preserved heart bore “TB nodules” and was “much enlarged, suggesting respiratory problems, linked to a lung disease.”

Conclusive, yes? Unfortunately, no. The examination was strictly visual; Chopin’s heart never left the church. As for opening up the jar and actually taking a tissue sample, fuhgeddaboudit: there was no way on the planet that this holy relic – the heart of Poland’s greatest cultural hero – was going to be touched, let alone sliced and diced; no way Jose; not a chance, Vance.

So the TB diagnosis, while still valid, cannot be considered conclusive, as other diseases could also have produced the nodes on the heart.

But there is an even bigger problem: without a DNA analysis it cannot not be proven that the heart is even Chopin’s. You see, Warsaw’s Church of the Holy Cross was reduced to dust during the inconceivably brutal Nazi destruction of Warsaw that followed the Warsaw Uprising (which occurred between August 1 and October 2, 1944). Yes: according to legend, a nameless German soldier removed the heart from its column before the church was blown to smithereens. Yes: according to legend the heart then passed through a variety of hands – including those of SS General Erich von dem Bach-Zelewski (the butcher who crushed the Uprising) – before being turned over to a Polish cardinal. It’s impossible to know how much of this is true, and therefore, it’s impossible to know – with any certainty – whether the heart that was re-installed in the rebuilt Church of the Holy Cross in October of 1945 is really Chopin’s.

Having said all of that, forensic scientist Tadeusz Dobosz, one of the leaders of the team that inspected the heart in 2014, is convinced that the heart is indeed that of Chopin. According to Professor Dobosz:

“The condition, the appearance of the preservative, the type of thread used for stitching the heart following its dissection in Paris, the type of jar – all, in our opinion, are of the era.”

It will be up to a future generation to determine conclusively whether the heart is Chopin’s and if it is, the exact cause of his death. Following its examination in 2014, the heart was sealed back up in its pillar, with instructions that it be left undisturbed until 2064.