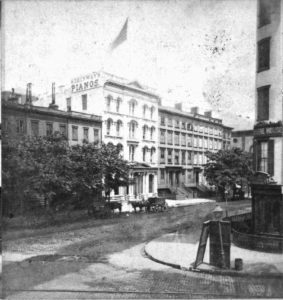 On October 31, 1866 – 150 years ago today – Steinway Hall opened on East 14th Street, between Fifth Avenue and University Place in New York. (As a native of New York City, I would tell you that when a New Yorker says “New York”, she is referring specifically to the island of Manhattan. You got a problem with that?)

Steinway Hall, which cost $90,786 to build there in 1866, served two mutually reinforcing purposes. Purpose one: to provide the city of New York with a state-of-the-art concert hall. To that end, Steinway Hall contained a concert hall with 2500 seats and a stage that could accommodate a 100-piece symphony orchestra. It was – at the time it opened – among the largest and certainly the most opulent and prestigious concert venue in New York City. It was the home of the New York Philharmonic Orchestra for 25 years: from the day it opened its doors in 1866 until 1891, when the orchestra moved to the newly built Carnegie Hall. 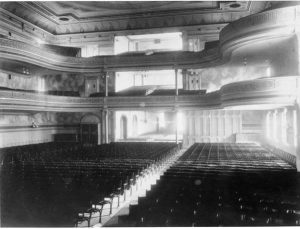 The original Steinway concert hall in on East 14th Street

The word “branding” is a fairly recent (and in my opinion, increasingly tiresome) addition to the contemporary lexicon. The relative newness of the word notwithstanding, “branding” had been going on since the first cave-dude sought to identify and differentiate his clubs from those of his competitors and, by doing so, gain an edge in what was – no doubt – a highly competitive market environment.

According to Forbes, the current top five “brands” are, in order from one-to-five, Apple, Google, Microsoft, Coca-Cola, and Facebook. Four out of five of these brands are high tech companies; the oldest of them – Microsoft – being just 41 years old. One wonders, given the rate of change in the technology sector, just how long these brands will be around. As opposed to certain brands that thanks to the quality they represent and the staying power they have exhibited have come to be considered almost timeless: Cartier and Tiffany; Rolls Royce and Mercedes Benz; Levi’s and Rolex, and – based on the criteria of quality and longevity – the greatest of all American brands, Steinway & Sons.

In 1850, a German cabinetmaker and piano builder named Heinrich Engelhard Steinweg, his wife and four of their sons emigrated from the German city of Braunschweig to New York City. Three years later – in 1853 – he and his sons founded a piano company and dubbed it “Steinway & Sons”. In 1855, just two years after building their first piano, a Steinway piano won the gold medal at London’s Crystal Palace exhibition. The European piano manufacturers snorted with disdain, convinced that Steinway’s success was but a fluke.
Well, it was not a fluke. In 1862, Steinway & Sons packed up four new-and-improved pianos and shipped them across the pond to England, there to compete at the great London International Exhibition. The New York Times reported the reaction of the local piano community when the Steinways arrived in London:

“The initiated [the Europeans] laugh into their sleeves at the idea of America’s sending pianofortes to London, to Europe. Some of them speak about exporting coals to New-Castle; some of them are indignant at Yankee audacity; the kindliest shake their heads and pass on. Not one for a moment imagines that these iron bound [shipping] cases may contain something good, and so the good folk hallooed and thought all was safe and jolly.”

As it turned out, it was not safe; it was not jolly, at least not for the Euro-piano builders. Their arrogance was flushed directly into the Thames when the Steinways won first prize, a victory that was repeated in 1867 at the Universal Exposition in Paris.

It was in 1872 that Steinway & Sons bridged the technological gap between proto-modern pianos and what today we consider the fully modern piano when it patented something called “duplex scaling”, which enhanced the power and resonance of the piano by lengthening the strings and allowing the undamped portion of the strings to vibrate sympathetically. With the slightest of changes, these are essentially the pianos we play to this day.

With all due respect to Steingraebe, Fazioli, and Bösendorfer, it is the humble opinion of this designated Steinway Artist that Steinway continues to build the best pianos in the world.

Let us give credit where credit is due. Not only did Steinway & Sons build a great instrument; the company also created a branding and marketing strategy that has allowed it to thrive well into the twenty-first century. And the original Steinway Hall – which, sadly, was demolished on January 6, 1926 to make way for Klein’s department store – played a huge roll in that strategy.

Post-script. Lest this post end on a downer, man, I would point out that a second Steinway Hall (“Son-of-Steinway-Hall”?) opened on West 57th Street (just down the block from Carnegie Hall) in 1925 and served the company until 2014, and a third Steinway Hall opened earlier this year at 6th Avenue and 46th Street. Long may it thrive, and long may people continue to buy pianos!