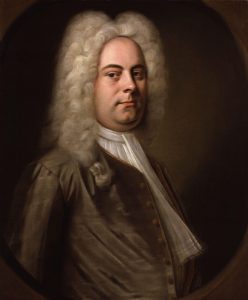 On July 17, 1717 – exactly 300 years ago today – George Frederich Handel’s Orchestral Suites in F Major and D Major (collectively known as his Water Music) received their premiere during a royal cruise down the River Thames from Whitehall to Chelsea.

Here’s the story – the great story – that’s usually told about the writing and the premiere of Handel’s H2O Musik:

Georg Friedrich Händel was born in the central German state of Saxony-Anhalt on February 23, 1685. Like so many other great musicians (including includes Robert Schumann, Peter Tchaikovsky, Igor Stravinsky, Cole porter and Paul Simon), Handel (we’ll use the Anglicized spelling of name from here on out) bombed out of law school in order to pursue a career as a musician.

Fabulously ambitious and as tireless as a phone solicitor, Handel’s first two operas – Almira and Nero – were written and produced in Hamburg in 1705, when he was still but a lad of 20 years of age.

From 1706 to 1710 he lived and worked in Italy, composing operas and sacred music. Such was his fame and popularity among Italian audiences that he became know as il caro sassone – “the dear Saxon”. (We would be hard put to find another instance of Italians speaking so affectionately about a German.)

By 1710 the 25-year-old Handel had become that hottest of compositional commodities: a German-trained technical virtuoso who could compose lyric, Italian-language opera as well (if not, frankly, better) than any Italian.

In June of 1710, Handel was hired as “Kapellmeister” to Prince George Ludwig of Brunswick-Lüneburg, the Elector of Hanover, in central-north Germany at a salary of 1500 crowns per annum. The good folks in Hanover were thrilled to have the young phenom in their midst. Handel however, was somewhat less-thrilled, and despite the fact that Hanover had a first-class opera house, he had heart set on more prestigious employment.

Now it just so happened that due to a previously arranged engagement, Handel left Hanover for London soon after signing his contract with Hanover, promising to be back ASAP.

It is not an overstatement to say that the London audiences from the Queen on down went ape over the 25-year-old Handel. According to the irrefutable H. C. Robbins Landon:

“Handel played for Queen Anne and astonished the court with his flamboyant writing. He was an instant success, with the public and with the Queen.”

Nevertheless, Handel was expected back in Hanover, and return he eventually did. In the autumn of 1712, Handel again convinced his boss Prince George to allow him to briefly “visit” London. It was stipulated on the actual permission slip that Handel could visit London:

“on condition that he return within a reasonable time.”

Two years passed, 1714 rolled around, and Handel was still in London. And while we really can’t blame Handel – Hanover was, well, Hanover but London was London, the New York City of it’s time – neither can we pretend that two years was a “reasonable amount of time.” The fact was, Handel was AWOL, and his boss – the Prince Georg Ludwig of Hanover – was none too pleased.

On August 1, 1714, Queen Anne of England died and was succeeded by . . . Prince Georg Ludwig, the Elector of Hanover, who was crowned George I on October 20, 1710! (The dynastic intricacies that allowed that to happen would take many thousands of words to enumerate.)

According to legend, the truant Handel – afraid to show his mug at court – plotted with his friend the Baron Kielmansegge to obtain the King’s pardon. When the king and his court took an excursion by barge on the Thames, Kielmansegge chartered a second barge manned by some 50 musicians under Handel’s direction. The music they played – two collections of dances now known as Handel’s Water Music – so captivated King George that he pardoned Handel on the spot and restored him to favor.

And everyone lived happily ever after.

Entirely true or not, it’s a great story.

However, truth be told, the story as just told is not entirely true. By the time the Water Music was performed during that leisurely day on the Thames – on July 17, 1717 – George had been in England for nearly three years. In that time, he had heard numerous performances of Handel’s music, including a command performance of Handel’s opera Rinaldo. By 1717 the King had also reinstated Handel’s Hanover salary, which had been cut off in 1713. So by 1717, King George I had at least partially – if not entirely – forgiven Handel his transgressions. Which is just fine because the really fascinating story here is not about Handel being “forgiven” but rather, how two Germans – Georg Ludwig and Georg Friedrich Handel – became two of the most important Englishmen who ever lived. With all due respect to the twentieth-century composer Benjamin Britten, Handel remains the most famous and beloved “English” composer in history, while Georg Ludwig, as King George I, founded a royal dynasty that lives on today in the form of George’s great-great-great-great-great-great granddaughter, Queen Elizabeth II.