Music History Monday: To Dance With the Devil 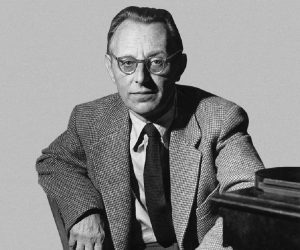 Today we recognize the birth – 122 years ago, in Munich – of the composer and educator Carl Orff.

Orff lived a long and productive life. He died on March 29, 1982 at the age of 86. He was a composer of great talent whose works draw on influences as diverse as ancient Greek tragedy and medieval chant, Baroque theater and Bavarian peasant life. His so-called “scenic cantata”, Carmina Burana (1936), remains an audience favorite today. Along with the German educator Gunild Keetman, Orff developed a musical education method in the 1920s called the Orff Schulwerk, or the “Orff Approach”, a methodology that integrates music, movement, speech and drama in a manner based on what children do instinctively: play. Today, the Orff Approach is employed around the world and is one of the four major developmental musical educational methodologies; the other three are the Kodály Method, the Suzuki Method, and Dalcroze Eurhythmics.

Orff’s success as a composer and educator garnered him great honors in his native Germany. From 1950 to 1960 he was the Chair of Music Composition at the Hochschule für Musik in Munich, one of the most prestigious conservatories in the world. In 1956 he was given membership in the order Pour le Mérite, an honor awarded by the German government in recognition of extraordinary personal achievement. (During World War One, the military version of the Pour le Mérite was referred to as the Blauer Max, the “Blue Max”.) In 1959 Orff received an honorary doctorate from the University of Tübingen; in 1972 he received another from the University of Munich. That same year he was awarded the Grosses Verdienstkreuz der Bundesrepublik Deutschland (“Order of Merit of the Federal Republic of Germany”), and in 1974 he received the Guardini Prize from the Catholic Academy of Bavaria.

It all sounds lovely: a composer and educator honored in his lifetime and esteemed after his death.

Except for the fact that from 1933 to 1945, Orff lived, worked, and thrived in Nazi Germany. For reasons we will observe, the exact nature Orff’s life in Hitler’s Third Reich remains something of a mystery and will almost certainly never be known for sure. One thing we do know, however, is that by staying in Germany, Carl Orff’s life and career became a Cautionary Tale for any artist who would dance with the devil.

There are two schools of thought regarding Orff’s relationship with the Nazis. One claims that he was, at best, tolerated. The other maintains that Orff not only collaborated but was, himself, a tried-and-true National Socialist who composed music in the service of Nazi ideology.

To a person, Orff’s friends and colleagues claimed after the war that his work under the Nazi regime represented a creative artist doing his best to “hang on”; that his “political and moral integrity were of the highest order” and that Orff was himself a “victim”.

(We would respectfully observe that Orff’s presumed “victimhood” was on a somewhat different level than that of the 60 million who died during the War. “We were victims, too!” was a common claim by many who survived World War II. For example: as a nation, post-war Austria claimed to have been the first victim of Nazi aggression due to the Anschluss – or “reunification” – of Austria with Germany in March of 1938. Yet in a referendum conducted on April 10, 1938, the Austrian population voted 4,453,912 [99.73%] to 11,929 [0.27%] in favor of reunification. A degree of collusion and rigging notwithstanding, these are not numbers that reflect “victimhood”.)

Orff’s friends and colleagues claimed that he was defiantly anti-Nazi. And yet in the 72 years since the end of the War, no evidence of such defiance has yet to emerge. On the contrary, what has been called a “conspiracy of selective memory loss” is in evidence in the Orff literature, as if the Nazi years had hardly happened at all. For example, in 1995 a number of books, exhibitions and catalogs appeared in Germany to mark the 100th anniversary of Orff’s birth; the Nazi years –surprise! – were mentioned hardly at all. In 1996, a comprehensive exposition sponsored by the Carl Orff Center in Munich “accidentally omitted mention” of what was one of Orff’s most controversial works, his incidental music for Shakespeare’s A Midsummer Night’s Dream composed in 1939.

(Orff had been hired to write appropriately Aryan music to replace the vilified Jewish composer Felix Mendelssohn’s famed incidental music. According to Alex Ross, writing in 1995 in The New York Times, “the completely unscrupulous Orff accepted a commission to write a replacement score for Mendelssohn’s verboten ‘Midsummer Night’s Dream,’ one of the shabbiest acts in musical history.”)

So: was Orff a Nazi? No, he was not. He was, in fact put off by much of what the Nazi party stood for. He found the crudity of Nazi doctrine laughable, although he did his laughing in private. Rather, he was an opportunist, someone whose moral outrage applied only to those things that affected him directly. When it came to Nazi policy and politics, he learned – as did so many of his fellow German citizens – to look the other way, to pretend that if something didn’t affect him personally it was none of his business.

Orff also had the misfortune (though he would have considered it his great good luck) of sharing with the regime many of its musical beliefs. Orff abhorred jazz and atonality, both of which were considered “degenerate music” by the Nazi authorities. Orff was fascinated by Volksmusik, meaning German folk music, the music the Nazis believed resonated with the heart and soul, the Blut und Boden (the “blood and soil”) of the German nation. On top of this, writes Michael Kater in his Composers of the Nazi Era (Oxford, 2000):

“Orff’s musical-pedagogical system had become the bedrock of instruction courses everywhere, from conservatories and music schools to educational institutions of the Hitler Youth.”

And so Orff’s own artistic and educational proclivities became increasingly indivisible from those of National Socialism. By 1944 he had reached the apogee of his career. The phenomenal success of Carmina Burana had made him the wealthiest and most popular composer in Germany. He became one of the very few German artists to be exempted from any sort of war service. Propaganda minister Joseph Goebbels called on him personally. In December of 1944, Orff dedicated a brief work to “Adolf Hitler, the patron of German Art.”

Five months later, on May 8 1945, Germany surrendered unconditionally to the Allies and the war in Europe was over.

It was soon made clear that Nazis and their associates could expect retribution. And thus Orff – like his friends and colleagues – required two things: a conspiracy of silence and lots of alibis (meaning lies).

Orff did in fact lie his way through his Denazification hearings, portraying himself as a victim of Nazi persecution who only just managed to survive the war. That he managed to succeed in portraying himself this way speaks highly of his ability to manipulate his interrogators, and also to the fact that he could expect those he knew to lie for him, and he would lie for them.

Like so many Germans of his generation, Orff lived with his lies for the rest of his life. Even as the post-war German economic miracle came to pass, Orff’s generation maintained their self-protective silence. They heaped awards and degrees on one another, as evidenced by Orff’s post-war honors. But it speaks volumes that of all Orff’s post-war honors listed at the beginning of this post, not a single one came from outside of Germany.

So – finally – to the question we all must be asking: can we allow ourselves to enjoy Orff’s Carmina Burana? In fact, it is the only piece of concert music composed in Nazi Germany in the international repertoire today. According to the distinguished German musicologist Albrecht Riethmüller (born 1947), “I have absolutely no problem with calling Carmina Burana Nazi music.” Writes the equally distinguished American musicologist Richard Taruskin (born 1945), “aesthetics or not, Carmina Burana is fascist music.” According to the French-born American literary critic George Steiner (born 1929), “Carmina Burana is fascist trash, and can be shown to be so in musical terms.” Musicologist Richard Toop (born 1945) suggests that is it “almost impossible to [further] debase an overblown, crude piece of music from a Nazi sympathizer with a taste for smutty lyrics.”

Modern critics and academes have not been kind to Carmina Burana, yet it remains an audience favorite. Can we listen to it without acknowledging its historical baggage? That is a decision that must be left to each one of us.