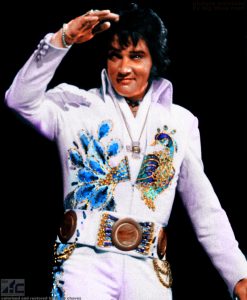 The King in his peacock jumpsuit

Risking, I know, the deadly sin of pride (why is there no such equivalent as the “sin of self-loathing”, which can, under many circumstances, be more dangerous and deadly than pride?), Risking the sin of pride I’d tell you that having started these Music History Mondays on September 16 of last year (2016), I have not missed a single week, turning out 47 consecutive posts totaling nearly 50,000 words.

Circumstances now demand a brief hiatus. It’s not the dog days of summer that necessitates my break, although heaven knows we all appreciate a little vacation time now and then. And it isn’t for lack of great topics. Offered strictly as a tease, here’s what I had planned to write about between today, Monday July 24 and Monday, August 28:

July 24: an appreciation of the Swiss-American composer and educator Ernst Bloch, who was born in Geneva on July 24, 1880.

July 31: we were going to look forward to August 1, which marks the 233rd anniversary of the death of Wilhelm Friedemann Bach, arguably the most talented of Johann Sebastain’s sons but a very, very naughty boy.

August 7: on this day in 2008, Elvis Presley’s white, sweat-stained, , high-collared, V-necked, peacock-embroidered jumpsuit – designed by Bill Belew – was auctioned off for $300,000, making it the most expensive piece of Elvis memorabilia ever sold at auction. (By comparison, a pair of Presley’s stained underwear, worn during a 1977 concert, was offered up by a U.K. auction house in 2012. Disappointingly, it failed to bring in the reserve price of £7,000.)

August 14: The. Worst. Luck. Ever. On this day in 1962, Pete Best was fired from the Beatles during a gig at The Cavern in Liverpool. Four days later Best was replaced by Ringo Starr, who was just finishing up a three-month gig with Rory Storm & the Hurricanes at a Billy Butlin’s holiday camps (a series of resort hotels located in Southern England and Wales). If Best had just lasted a few more weeks…

August 21: we would have turned to August 22 for the birth, in 1862, of the utterly amazing Claude Debussy

August 28: the premiere, in 1850, of Richard Wagner’s Lohengrin in Weimar, conducted by Franz Liszt.

Yes indeed, great topics all, particularly the Elvis memorabilia post planned for August 7. But take a break I must because three weeks ago, rather on the spur of the moment, The Great Courses and I decided to record a new course in September. It is a project that will require me to write some 50,000 words between July 1 (I’ve already started) and September 1.

So provided I survive my present, self-inflicted ordeal, I will rejoin you in early September, prepared – once again – to invest Monday mornings with some degree of interest and amusement.