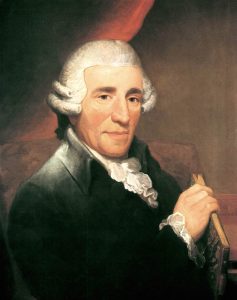 A portrait of Haydn by Thomas Hardy, painted in London in 1791

It was 219 years ago today – on March 19, 1799 – that Joseph Haydn’s epic, one hour and forty-five minute long oratorio The Creation (Die Schöpfung) received its public premiere in Vienna. Completed in 1798 when Haydn was 66 years old, The Creation is considered by many to be Haydn’s greatest work; truly, a masterpiece among masterpieces.

That public premiere of The Creation on March 19, 1799 was one of the great events in the dazzling history of Viennese music. The performance was sold out far in advance, and such was the excitement preceding the performance that Haydn felt it necessary to request – on the posters announcing the premiere, no less – that the audience control itself and not applaud between the numbers (and thus encourage encores):

“for otherwise, [wrote Haydn] the true connection between the various single parts, from the uninterrupted succession of which should proceed the effect of the whole, would necessarily be disturbed.”

A critic in attendance from Leipzig’s Allgemeine musikalische Zeitung confirmed that the audience took Haydn’s injunction to heart; he reported that:

“No one can imagine with what silence and attention the entire oratorio was heard – only gently interrupted at the most striking passages by soft exclamations.”

By 1799, any new work by Haydn – who was, at the time, the single most famous and beloved living composer – would have generated tremendous interest, let alone a huge oratorio that depicted and celebrated nothing less than the story of creation itself. But what truly pushed the anticipation of the public premiere to the edge of hysteria was the private premiere that had taken place nearly 11 months before. 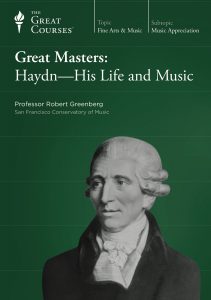 The first performances of The Creation occurred on April 29 and 30, 1798, but for a specially invited audience only at the palace of Prince Johann Joseph Nepomuk von Schwarzenberg on the Mehlmarkt (today, the Neumarkt) in central Vienna. These private performances generated a scene out of an old time Hollywood premiere. A huge crowd of onlookers gathered outside the palace to watch the invited worthies walk the red carpet (or some such) into the theater. Twelve policemen and eighteen armed guards were stationed around the palace to keep the crowds at bay. The lucky invitees consisted of the highest nobility of Austria, Poland and England. Haydn’s friend Giuseppe Carpani remembered:

“I was present, and I can assure you I never witnessed such a scene. The flower of society of Vienna was assembled in the room, which was well adapted to the purpose. The most profound silence, the most scrupulous attention, a sentiment, I might almost say, of religious respect prevailed when the first stroke of the bow was given.”

Haydn himself, ordinarily cool as a cucumber and smooth as a peeled onion was a nervous wreck. He recalled later:

“One moment, I was cold as ice, the next I seemed on fire, more than once I was afraid I should have a stroke.”

No stroke necessary, maestro, it was all good; the performance created a sensation. Reflecting well the audience reaction, the critic for the Neuer teutscher Merkur wrote:

“Three days have passed since that incredible, rapturous evening, and still the music sounds in my ears and in my heart; still the mere memory of all the flood of emotions experienced that evening constricts my breast.”

(Our advice to this critic regarding his “breast”: seek medical attention.)

It is fairly impossible for us, here today, to imagine what acute agonies Haydn’s fans and followers must have felt in that 11 months between the private and public premieres of The Creation. They had no way of knowing what the oratorio actually sounded like; it wasn’t published until 1800 and, of course, there were no recordings available (not even pirated ones); no YouTube, no Instagram, no HearMeOut, and OH MY GOD HOW DID PEOPLE LIVE WITHOUT THE INSTANT GRATIFICATION WE TAKE FOR GRANTED TODAY?

Well, live Haydn’s fans and followers did until the public premiere 219 years ago today, and all the performances that followed on the heels of that public premiere.

For our information, that public premiere took place at Vienna’s “old” Burgtheater on the Michaelerplatz (“St. Michael Square”).

As we may correctly assume, that descriptor attached to the theater’s name – the “old” Burgtheater – indicates that there is also a “new” Burgtheater, a theater that replaced the “old” one.

Don’t get me started. 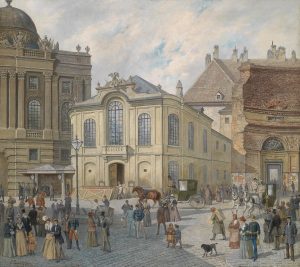 A painting by August Gerasch of the old Burgtheater in the early nineteenth century; the Hofburg looms above it to the left.

The “old” Burgtheater opened on March 14, 1741. It was created on the order of the Empress herself, Maria Theresa, who wanted a theater directly adjacent to the imperial palace, the Hofburg. In 1776, her son – Emperor Joseph II (elder brother of Marie Antoinette) – dubbed it The German National Theater. Among the many, many premieres that trod its boards were Mozart’s operas The Abduction from the Seraglio (1782), The Marriage of Figaro (1786), and Cosi Fan Tutte (1789); Mozart’s Piano Concerto No. 24 (1786) and Beethoven’s Symphony No. 1 (1800). But none of that history was enough to save it, and when a larger, more opulent theater (the “new” Burgtheater) was constructed and opened as part of the great development of Vienna’s Ringstrasse, the “old” Burgtheater became redundant and was demolished in 1888. 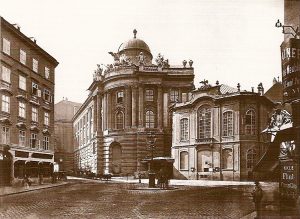 A photograph of the theater immediately before its demolition in 1888.

Yes: we all know how valuable urban real estate can be, and a spot on Vienna’s centrally located Michealerplatz – nestled up against the Hofburg (the Imperial Palace) – is as tony an address any one will find in central Europe. And indeed, the space was put to good use, as the wide, curving wing of the Imperial Palace that now faces the Michealerplatz called “St. Michael’s Wing” (see accompanying picture) could finally be constructed with the theater out of the way.

A photograph of “St. Michael’s Wing”, which was completed in 1893, five years after the demolition of the old Burgtheater. The theater occupied the space slightly left of center of the photo.

Nevertheless, the old Burgtheater joined that painfully long list of world heritage-class structures that were razed without adequate attention to their extraordinary historical value. A short list of such “what were they thinking?” demolitions includes Les Halles in Paris; the Garrick Theater (Schiller Building) in Chicago; the Frank Lloyd Wright-designed Larkin Building in Buffalo; the Palace of the Republic in Berlin; and New York’s Vanderbilt Mansion, the original Waldorf-Astoria on 34th Street and Fifth Avenue, and the original Baths of Caracalla-like Penn Station.