A Most Successful Campaign of Misinformation, or Listen to the Birdie! 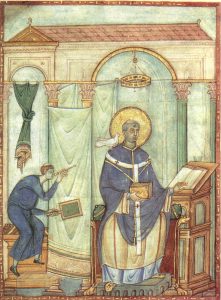 Pope Gregory I, Deacon Peter and the Bird/Holy Spirit, ca. 983

Roughly two years ago, in preparation for creating these “Music History Monday” posts, I spent several days putting together a calendar of musical events from which I could draw my topics. The internet made this job a gazillion times easier than it would have otherwise been; instead of spending untold hours in a music library or with my head in The New Grove Dictionary of Music and Musicians, transcribing dates one at a time, the internet offered a ready supply of lists. However – as is usually true when dealing with info gleaned from the web – one must carefully verify that info. (I’m glad I did. I have seen many an incorrect date. For example, on one site, all the dates given for Russian musical events were based on the Julian, rather than the Gregorian calendar.)

On occasion I will find entries that are not just wrong but wrong-wrong. For example, the following entry for March 12 can be found on a site called ClassicalAlmanac.com:

Sweet Pater in caelis, talk about wrong-wrong! In fact, Pope Gregory I died on this day 1414 years ago. As for the second phrase, “developed the Gregorian chant,” well, that statement is so wrong on so many counts it’s difficult to even know where to begin. But unlike confusing a birthdate with a death date, we cannot blame the poor schmendrick who wrote that second phrase, because it represents a campaign of misinformation – a most successful campaign of misinformation – that has been active for over 1100 years.

Let’s start with the substance of that misinformation, as illustrated by the image that accompanies this post. It is an illumination painted in the southwestern German city of Trier circa 983. It depicts Pope/Saint Gregory sitting on his throne with a dove – which represents the Holy Spirit – perched on his shoulder. The dove is singing chants into Gregory’s ear, which Gregory in turn sings to his scribe, Deacon Peter. In this particular image, Deacon Peter, wondering what’s going on behind the screen, is taking a peek.

The illumination, then, depicts the medieval Roman Church’s party line that the chants that make up the Roman liturgy were literally passed from god’s lips (via the bird) to Gregory’s ears and then on to the faithful. The earliest such written statement attesting to this divine transmission appeared in John the Deacon’s 873 biography of Gregory, which was written 269 years after the Gregory’s death.

And so the statement in ClassicalAlmanac.com that: “Pope Gregory developed the Gregorian chant.”

In fact, he did nothing of the sort.

This is what Pope Gregory I did do.

Gregory I (and BTW, his given birth name was indeed Gregory) reigned as Pope from 590 to 604. During his papacy he was involved in the codification of the Roman rite, though the assertion that he had received the entire repertoire of Roman chant from the dove of the Holy Spirit is entirely bogus.

So why the misinformation?

The issues were those of power and politics.

This growing profusion of regional plainchant was noted with increasing discomfort by the Roman Church, which itself employed a species of chant now referred to as Old Roman chant. The Roman Church, which was the westernmost jurisdictional center (or “see”) in Christendom, grew jealous of regional plainchant and the provincial independence that such regionalism implied. If regional churches were going to decide for themselves what chants to sing (and thus what prayers to say and what rites to conduct), then the authority of Roman Church – the church of St. Peter, after all – would become just so much chopped wafer.

It’s not that the Roman Church didn’t do its best to assert its authority over those pesky northerners. Professional ecclesiastic singers were regularly dispatched from Rome to teach their northern brethren what to sing and when to sing it. But there was local resistance to Rome’s assertion that its way was the only way. Churches in what today are France and England saw Rome’s attitude as meddlesome and intrusive. The Romans, for their part, thought the northerners uncivilized, ungrateful, and disrespectful.

In the end, political events put Rome in the driver’s seat to stay.

In 754, the Bishop of Rome, Pope Stephen II, turned a deal with the Frankish Kingdom, an area encompassing today what is France, Switzerland, and a good bit of western Germany. The deal: in return for Frankish military protection, the Pope would consider the Franks as “honorary Roman Patricians” and recognize their hereditary right to what is today France, Germany, Austria, Switzerland, and bits and pieces of Italy, the Balkans, and the Czech Republic.

It was an excellent arrangement for all involved, one that was fully realized in 800 when Pope Leo III crowned the Frankish King “Charles the Great” – or “Charlemagne” – Emperor of the West, thus giving birth to the amalgam of states that came to be known as the “Holy Roman Empire”.

Thanks to the combined power and influence of the Roman Church and Charlemagne’s Frankish Kingdom, a period of relative peace and civility came to Western Europe during an otherwise uncivil time, a period now known as the Carolingian Renaissance. Among the many things accomplished during this “rebirth” was a revival of education – at least among the clergy – and the creation of scriptoria for the preservation and dissemination of manuscripts (all still copied by hand, but more rapidly than before by using the so-called “Carolingian miniscule”, a style of writing that became the small case letters of the Western alphabet). Monetary and administrative reforms encouraged commerce, and Western Europe emerged from 300 years of isolation as Charlemagne dispatched ambassadors to Constantinople and Baghdad.

The Carolingian Empire received its moral authority from the Bishop of Rome (the Pope). The Pope, in turn, was protected by the Carolingian Empire. With such an arrangement securing the peace and prosperity of Western Europe, it was imperative that religious practices within the Empire be standardized along the Roman model. Only then could the Empire be unified both spiritually and temporally; only then could the divine mandate endowed by the Pope on the Frankish Kingdom be fully realized.

Thus, the “Pope Gregory listened to the birdie” story, which was created to legitimize Roman chant as being of “divine” origin, was a key component in convincing northern churches to abandon their regional practices in favor of those used by the Roman See. An thus, the inaccurate but almost universal practice of calling Roman plainchant “Gregorian Chant.”