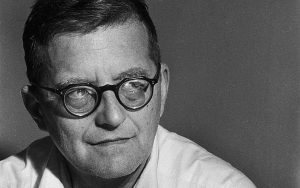 The Premiere That Almost Wasn’t: Shostakovich’s Symphony No. 13

Wednesday, December 19, 1962 was significant for something that didn’t happen.

On the day before – Tuesday, December 18, 1962 – Dmitri Shostakovich’s Symphony No. 13 received its premiere in Moscow with Kirill Kondrashin conducting the bass soloist Vitali Gromadsky, the Moscow Philharmonic Orchestra, and the basses of the Gnessin Institute and Republican State Choirs.

The symphony – which set to music five poems by the Russian poet Yevgeny Yevtushenko (who was 29 years old at the time of the premiere) – created a sensation. Yevtushenko recalled:

“At the symphony’s premiere, the audience experienced something rare: for fifty minutes, they wept and laughed and smiled and grew pensive.”

“It was major! There was a sense of something incredible happening. The interesting part was that when the symphony ended, there was no applause at first, just an unusually long pause—so long that I even thought that it might be some sort of conspiracy. But then the audience burst into wild applause with shouts of ‘Bravo!’

At the time of the premiere, the 56 year-old Dmitri Shostakovich was a Soviet icon, an institution, the most famous and beloved Soviet artist who was ever to live, a card-carrying member of the Communist Party (since 1960) and a member of the Supreme Soviet of the Soviet Union. His comings and goings were reported in Pravda and the premieres of his symphonies were among the most important of all Soviet cultural events.

Which makes what happened – or didn’t happen – on December 19, 1962 (the day after the premiere of Shostakovich’s Tenth Symphony) all that more extraordinary. Aside from an extremely brief, “preliminary assessment” in Pravda, there was no mention in the official press (which means in any Soviet press) that the premiere had taken place. Trying to ignore the existence of Shostakovich’s Thirteenth was like trying to ignore an elephant in your boudoir, but that’s what the Soviet authorities did their very best to do.

The reason behind this “official silence” can be divined from this recollection by the conductor, Kirill Kondrashin:

“At the end of the first movement the audience started to applaud and shout hysterically. The atmosphere was tense enough as it was, and I waved at them to calm down. We started playing the second movement at once, so as not to put Shostakovich into an awkward position.”

Why would Shostakovich be in an “awkward position”? Because that first movement was about institutionalized anti-Semitism in the Soviet Union and the Soviet refusal to recognize that the Holocaust had taken place. (The poem set to music in the first movement – entitled “Babi Yar” – is named for a ravine outside of Kiev where 33,771 Jewish men, women, and children were slaughtered by the Nazi’s on September 29 and 30, 1941.)

For the Soviet authorities, things didn’t get any better as the symphony progressed. The second movement, entitled “Humor”, excoriates (Soviet) officialdom for attempting to stamp out wit; the third movement, “In the Store” celebrates the endurance of (Soviet) women and the hardships they faced in feeding and taking care of their families; the fourth movement, “Fear”, describes the terror of the Stalin years; and the fifth movement, “Career” attacks the cynical self-interest of (Soviet) bureaucrats and their bureaucracy.

(I put the word “Soviet” in parentheses above because while the poems never say “Soviet” themselves, everyone on the planet knew exactly what the poems were addressing.)

There mere fact that Shostakovich was able to compose such a symphony was an indication of how Soviet repression had changed since the death of Stalin in 1953. In the old days, Shostakovich’s Thirteenth would simply have disappeared, along with Shostakovich. But Soviet authoritarianism had changed significantly since 1953; by 1962 it was well understood that the surest way to create a cultural martyr out of the symphony was to ban its performance. So the authorities took a more subtle approach. To wit:

Shostakovich’s original choice for the bass-soloist was Boris Gmirya, who professed to be “thrilled” to have been chosen to sing the premiere. He then sat on the score for a month before writing Shostakovich that in light of the “dubious” texts he could not take part in the performance. Okay.

The authorities also got to the conductor Evgeny Mravinsky. Mravinsky – who had premiered almost all of Shostakovich’s orchestral music since the Fifth Symphony in 1936 – also had a sudden change of heart and mind, and likewise refused to premiere the Thirteenth Symphony, for which Shostakovich never forgave him. (Mravinsky’s withdrawal horrified his friends and colleagues, including the ‘cellist and conductor Mstislav Rostropovich, who later wrote:

The dress rehearsal was scheduled for the morning of the premiere, December 18, 1962. The house was packed for the rehearsal: students from the Conservatory and Party officials were there in equal number. One person who was not there was the new bass soloist, Viktor Nechipailo, who phoned in 15 minutes before the rehearsal was to start and claimed “indisposition”. Right. Anticipating just such a possibility, Shostakovich and the conductor Kirill Kondrashin had arranged for another singer – Vitali Gromadsky – to secretly learn the part: an emergency under-study, as it were. Gromadsky was brought forward and the rehearsal began.

After completing the first movement the conductor Kirill Kondrashin was called to the telephone. It was Georgi Popov, the Soviet Minister of Culture. Popov asked Kondrashin if there was anything that might prevent him from conducting the premiere. Kondrashin told him that he was just fine, “in splendid form.” Popov then asked – “menacingly” – if the symphony could be performed without the first movement. Kondrashin told him that that was out of the question, ended the conversation, and went back to the rehearsal.

(The Moscow district Party secretary was livid and was recorded as having said: “This is outrageous, we let Shostakovich join the Party, and then he goes and presents us with a symphony about Jews!”)

The premiere went ahead as scheduled, minus the planned television broadcast. The “official silence” on December 19 did nothing to dim the triumph of the symphony, and Shostakovich’s Thirteenth remains one of the great musical masterworks AND political statements of the twentieth century.