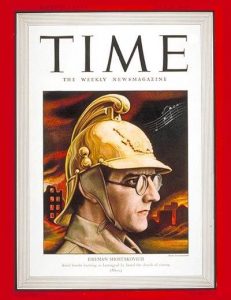 Shostakovich on the cover of Time Magazine, July 20, 1942, wearing his fireman’s helmet during the siege of Leningrad (St. Petersburg).

Last week’s “Music History Monday” was about the premiere of Dmitri Shostakovich’s Symphony No. 13 on December 18, 1962 and the official Soviet silence that greeted that premiere on December 19, 1962.

The lessons to be learned from Shostakovich’s life, his times, and his music are as real and relevant today as they were when Shostakovich was alive. Russian repression and adventurism are alive and well today in the kleptocracy of Tsar Vladimir the First as they were under the Soviets. “Mistakes that were made” are once again being made, and Shostakovich’s life and music offer a degree of insight into these current events that few other things can.

Art and politics can be problematic bedfellows, but they are an indivisible coupling when exploring the music and life of Dmitri Shostakovich.

He was born on September 25, 1906, in St. Petersburg, and died in Moscow on August 9, 1975, a few weeks shy of his 69th birthday. The country in which Shostakovich lived and worked for the great bulk of his life, the Union of Soviet Socialist Republics was born in November of 1917 in St. Petersburg. Like Shostakovich, it also died in Moscow, in December of 1991, age 74. The Soviet Union died bankrupt and physically corrupted; it’s air, land and water poisoned, its great people struggling for survival. Shostakovich died, his body corrupted by heart disease and lung cancer that had metastasized everywhere, a result of a lifetime of self-pollution via chain-smoking the foulest-of-foul Soviet cigarettes, so-called “papirosi”, the card-board tipped Russian cigarettes to which he was addicted.

Dmitri Shostakovich’s compositional career mirrored exactly the rise and history of the Soviet Union from 1917-1975. He began attending the St. Petersburg (Petrograd) Conservatory at the very end of the Tsarist era; he graduated and began his career during the liberal years of Lenin’s rule (the early 1920s); he knew Stalin personally and was nearly purged twice, in 1936 and 1948; he experienced the beginning of the siege of Leningrad, dealt personally with Khrushchev, and died while Brezhnev was in power.

Shostakovich survived because he was considered by the powers that were to be a yurodivy, a village idiot: a holy fool who protests in the name of humanity and not in the name of political change, by Russian tradition one of the chosen few allowed to speak out, a sort of societal safety valve. He was a coward, a hero, an opportunist, and everything in between. He saw his friends purged, he was eyewitness to Stalin’s horrific “five year plans” as well as the Nazi destruction of much of his country; post-war reconstruction; the arms race; the space race; the war in Afghanistan; pretty much the entire Soviet nine yards. But most of all, he was a truly great composer. And all of his fear and courage, his experience and imagination found their way into his music. He wrote music that pleased the state and music that infuriated the state. He wrote a symphony (No. 13) that acknowledged the Holocaust at a time when official Soviet doctrine did not. He wrote an opera that almost got him killed; at other times he kissed the collective (and hairy?) derrieres of the Politburo whenever it was necessary, toed the party line, and publicly said what he was told to say.

And yet, through it all, his mind remained his own, and his conscience – riddled with fear and guilt and self-loathing as it was – was the secret inspiration behind so very much of his music. As such, Shostakovich is not just the most important composer of string quartets and symphonies from the 1920s to the 1970s, he was also a witness to the rise and failure of Soviet Communism, one of a handful of defining events of the twentieth century.

Boris Schwartz writes in Groves Dictionary of Music and Musicians:

“As a creative artist Shostakovich was attuned to the needs and responses of his audiences. Shifts in his musical style were not always meant to placate ideological opponents; more probably they represented an almost intuitive reaction to the environment and the mood of his country.”

No composer’s music with which I’m familiar mirrors both the world around the composer and the vicissitudes of that composer’s life better than that of Dmitri Dmitriyevich Shostakovich.