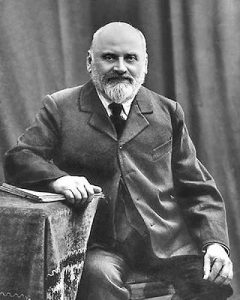 A happy 180th birthday to Mily Balakirev, the man who became – virtually – the Tsar of nineteenth century Russian music. More than anyone else, it was Mily Balakirev who postulated and promulgated precisely what Russian nationalist music should be.

Balakirev was born in the city of Nizhny Novgorod – which was known as “Gorky” from 1932 to 1990 – about 240 miles east of Moscow. He was a child prodigy as both a pianist and conductor and began composing at the age of 15. Among his early compositions was a virtuosic piano fantasy based on themes from Mikhail Glinka’s groundbreaking opera, A Life for the Tsar. Thanks to his two operas: A Life for the Tsar (known during the Soviet era as “Ivan Susanin”) of 1836 and Ruslan and Lyudmila, of 1842, Glinka was embraced (and continues to be embraced) as the “Messiah of Russian music”, that single composer credited with having lead Russian concert music out of the wilderness of Western European domination to a place of paradisiacal narodnost’, of Russian musical authenticity.

In 1855, at the age of 18, Balakirev moved to St. Petersburg, where he met and played piano for his hero, Mikhail Glinka. Glinka – who was 51 years old at the time – was gob-smacked by Balakirev’s piano playing. Glinka was, however, rather less impressed with Balakirev’s compositional technique: Balakirev was self-taught as a composer, and as the saying goes, the problem with autodidacts is that they have lousy teachers. (According to his friend Peter Baboriken, Balakirev never owned a single book on music theory, harmony, or orchestration.)

Nevertheless, Balakirev became part of Glinka’s “circle”, due in no small part to their fanatically shared belief that Russian concert music must be based on and soaked in Russian folk music and not Western European (and particularly GERMAN) compositional models and techniques.

(When it came to “Germany” and “German music” Balakirev’s nationalist xenophobia was to swell up like an over-ripe boil; for example, he claimed that the St. Petersburg Conservatory represented: “A plot to bring all Russian music under the yoke of the German generals!”)

Glinka told his sister Ludmila that Balakirev was the only man who shared his views on music:

“You can trust him completely, and believe me, in time he will be a second Glinka.”

Incredibly, Balakirev did indeed become “a second Glinka”. Just a year-and-a-half after meeting Balakirev, Glinka died. And thus at a stroke (no pun intended), Balakirev had a crazy opportunity. With Glinka gone, Balakirev – 20 years old and musically uneducated though he was – was as close to being “Glinka’s successor” as anyone in the tiny Russian musical community. And so he put out his shingle in St. Petersburg as a composer, music teacher and critic and went to work organizing a “Russian school of music.”

That he could do so was a case of “only in Russia”: the musical vacuum was such that given the requisite moxie (which Balakirev had in unlimited supply), even a relative compositional amateur like himself could pass as a pro. Even more amazing is that Balakirev was accepted as Glinka’s successor. Most amazing of all is that within just a few years, Balakirev had gathered around him a group of young amateur composers – hobbyists – who eventually changed not just Russian music but Western concert music as well. The best-known of the composers who became part of Balakirev’s “circle” were Cesar Cui, an army officer, engineer, and fortifications expert; Modest Musorgsky, an army ensign who resigned his commission and took a job at the post office; Nicolai Rimsky-Korsakov, a naval officer and future music professor; and Alexander Borodin, a doctor and chemist.

They came to be called the Moguchaya Kuchka, which might be translated variously as the “mighty heap”, the “magnificent few”, the “mighty handful”, or simply, “the Five”. (The boys referred to themselves as the “Balakirev Circle” or the “New Russian School”.)

The belief in the mystical, nation-defining power of folk music was part of the nineteenth century nationalist shtick, and nowhere was it more pronounced than in the musical proselytizing of Mily Balakirev and the musical compositions of The Five.
More than just a musician, then, Balakirev was a political musician, someone who responded artistically to the Russian tendency towards xenophobia that was part of the national psyche. He established a baseline aesthetic that became – through the influence of his teaching and the force of his personality – what we, today, identify as being the “Russian national compositional style”. An apostle of Glinka, he became a prophet in his own right, and helped lay the aesthetic groundwork for Russian concert music as we know it.