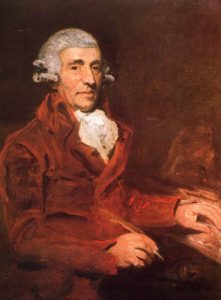 Joseph Haydn in 1791, a year before beginning his lessons with “the great Mogul” (Beethoven)

On Wednesday December 12, 1792, 224 years ago today, the nearly 22 year-old Ludwig van Beethoven jotted down an expenditure he had made that day: “Haidn [sic] 8 groschen.” Beethoven had just taken and paid for his first lesson with Joseph Haydn. The 8 groschen came to about 24 cents(!), typical of the token sums Haydn charged his non-aristocratic students.

Haydn had met Beethoven and examined (and heard) his music some five months before – in July of 1792 – when he passed through Bonn on his way back to Vienna after a triumphant 18 months residency in London. Haydn was knocked out by what he saw and heard and arrangements were quickly made for Beethoven to travel to Vienna in order to study with Haydn at the city of Bonn’s expense.

On November 2 or 3, 1792, Beethoven left Bonn for Vienna. The plan: Beethoven would study with Haydn for a year or two; get some high-end Viennese caché and then return to Bonn, there to serve – as did his father and grandfather – as a musical functionary of the Electoral Court. (In fact, Beethoven would never set foot in Bonn again.)

Beethoven arrived in Vienna on or about November 10. Having found a place to live, acquired a piano and some furniture, bought some clothes and made some contacts, it was time to pay a call on Haydn.

Alas, Beethoven was not an easy student. In fact, rarely was Beethoven’s inability to deal respectfully with authority more apparent than in his lessons with Haydn. Beethoven at 22 had a chip on his shoulder the size of an old-growth redwood; he had a serious persecution complex and a pathologic dislike for anything or anyone he perceived as an “authority figure”, a pathology ingrained in him by the abuse he had suffered as a child at the hands of his father.

For his part, the 60 year-old Josef Haydn was a disinterested teacher at best. It soon became apparent to Beethoven that “Papa” Haydn was neither a systematic nor a conscientious teacher and that his counterpoint exercises (his homework assignments) were not being properly marked. So Beethoven secretly hired another teacher, someone named Johann Schenk (1761-1830), to correct the assignments, which Beethoven then copied out anew before submitting to Haydn. Beethoven and Schenk got together 31 years later – in 1824 – and talked about old times; according to Beethoven’s assistant Anton Schindler, they:

“burst out laughing to think how they had fooled Haydn, who never once guessed what was going on.”

That’s not entirely accurate. Haydn did indeed discover the subterfuge after a year; in December of 1793. But Haydn’s break with Beethoven was a result of something rather more distressing than the lessons with Schenk.

On November 23, 1793 – still unaware that Beethoven was anything less than a devoted student – Haydn wrote a letter to Beethoven’s boss, Elector Maximilian Franz, which expressed both his pride in Beethoven’s “progress” and his concerns over Beethoven’s financial situation. The letter reads in part:

“Most Reverend Archbishop and Elector,
I am taking the liberty of sending your Reverence in all humility a few pieces of music . . . composed by my dear pupil Beethoven. They will, I flatter myself, be graciously accepted by your Reverence as evidence of his diligence in his studies. Beethoven will in time become one of the greatest musical artists in Europe, and I shall be proud to call myself his teacher.

While I am on the subject of Beethoven, may your Reverence permit me to say a few words concerning his financial affairs? For the past year he was allowed 100 ducats. That this sum was insufficient even for mere living expenses. Your Reverence may have had good reasons for sending him out into the great world with so small a sum. In order to prevent him from falling into the hands of usurers, I have advanced him cash, so that he owes me 500 florins. I now request that this sum be paid him. If your Reverence would allot him 1000 florins for the coming year, Your Reverence would free him of all anxiety … In the hopes that your Reverence will graciously accept this request of mine on behalf of my dear pupil, I am, with deepest respect, your Reverence’s most humble and obedient servant.
Joseph Haydn”

A nice man, Joe Haydn. Unfortunately, the Elector’s reply must have left him slack-jawed and with a weakened bladder.

“The music of young Beethoven which you sent me, with the exception of the fugue, was composed and performed here in Bonn before he departed to Vienna. Thus I cannot regard it as progress made in Vienna.

As far as his stipend is concerned, it does indeed amount to only 500 florins. But in addition to his salary here of 400 florins has been continuously paid to him; he received 900 florins for the year. I cannot, therefore, very well see why he is as much in arrears as you say.

I am wondering, therefore, whether he had not better come back here in order to resume his work. For I very much doubt that he has made any progress in composition during his stay, and I fear that he will bring back nothing but debts.”

Haydn was mortified; Beethoven had borrowed money from him, lied to him about his income, and had been less than forthcoming as to when he had written the music he had forwarded to the Elector. In Beethoven’s defense, I would point out that all of the music Haydn sent back to Bonn had been substantially rewritten by Beethoven since his arrival in Vienna, something the folks in Bonn either failed to notice or felt unworthy of mention.

As we might expect, the lessons with Haydn ended immediately. And when the authorities in Bonn cut off Beethoven’s stipend, he was able to hoist a middle finger in salute, because – almost overnight – he had become the darling of the piano crazed Viennese aristocracy.

Haydn, bless him, never said a disparaging thing about Beethoven except to refer to him as “that great Mogul” – “that great barbarian”. As for Beethoven, it took him a while, but he managed eventually obtain Haydn’s pardon. Joseph Haydn was simply too nice a man to hold a grudge.