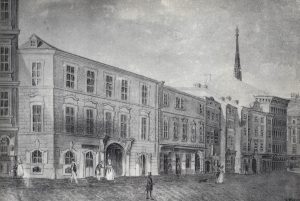 To the left-of-center, the no-longer-extant house at Rauhensteingasse 8 in which Mozart died. The room in which he died – his music room – is at the left-hand corner of the building, at 9 o’clock of the middle floor. The spire of St. Stephen’s Cathedral can be seen to the right.

December 5 is an important date in music history. On December 5, 1830 (which was a Sunday) Hector Berlioz’ ground-breaking Symphonie Fantastique received its premiere at a concert that began at 2 P.M. at the Paris Conservatoire, then located on the Rue Bergère – what today is called the Rue de Conservatoire – in the 9th arrondissement.

Tuesday, December 5, 1865 saw the public premiere of Johannes Brahms’ crazy-awesome Trio for Horn, Violin, and Piano in E-flat Major, Op. 40, in the southwestern German city of Karlsruhe, with the 32 year-old Brahms at the piano. The Barry Tuckwell, Itzhak Perlman, and Vladimir Ashkenazy recording on London affords more pleasure than any of us have a right to experience. Acquire it. Now. It gets no better.

But these and other events pale to insignificance next to what happened on Monday, December 5, 1791 in Vienna. It was then and there – at 55 minutes past midnight – that Wolfgang Mozart died in the music room of his first story (what we in the U.S.A. call the second story) flat, located in a house called “das kleine Kaiserhaus” (“the small imperial house’) at Rauhensteingasse 8 in central Vienna.

Mozart was 35 years, 10 months and 8 days young, and his early death was an unspeakable tragedy for us all. I blogged about Mozart’s death on December 4 and 5, 2013. Those blogs, which focus on the various conspiracy theories behind Mozart’s death and the many diagnosis offered for his death can be found on my Facebook page as well as on my web site at RobertGreenbergMusic.com.

This post will examine Mozart’s symptoms, treatment (what that it was), and offer up what as almost certainly the cause of his death.

Mozart took to his bed on November 20, 1791 and died 15 days later, on December 5. He was attended by two of Vienna’s most highly respected clinicians, Thomas Franz Closset (1754-1813) and Mathias von Sallaba (1764-1797). Compared to physicians today, Mozart’s “doctors” were working in the dark. They had almost no concept of concurrent diseases, and tended, therefore, to attribute all observable symptoms to a single disorder. They lacked the tools that today are considered indispensible for evaluating a patient: they had no stethoscopes or body thermometers. Neither did they have any knowledge of the normal range of body temperature, nor did they have any way to measure blood pressure.

In 1809, 18 years after Mozart’s death, his widow Constanze married a Danish diplomat named Georg Nikolaus von Nissen. In 1823, Nissen began work on a biography of Mozart based on primary sources, who included Mozart’s sister Marianne, his widow Constanze, and his sister-in-law Sophie.

All Mozart’s doctors had to work with were his observable symptoms, which – based on these primary sources – Nissen summed up as follows:

“Mozart’s fatal illness, where he was confined to bed, lasted 15 days. The onset was marked by swelling of the arms and legs and he was virtually unable to move; this was later followed by sudden vomiting, [and] a sickness called ‘acute miliary fever’ [a one-size-fits-all diagnosis of the time]. He remained fully conscious until two hours before he passed away.”

On the evening of December 4, Mozart was heavily “bled. Nissen’s biography contains the following, most telling passage:

“[Mozart’s sister-in-law Sophie, who was with him when he died], is of the opinion that Mozart did not receive adequate treatment for his [final] sickness, because instead of trying to drive out the skin eruptions, they bled [him] and put cold compresses on his head, whereupon his strength visibly ebbed and he fell unconscious and never came to again.”

The immediate cause of Mozart’s death, then, was almost certainly a stroke or cerebral hemorrhage brought on by his bloodletting.

However, the illness that led to the bloodletting was, almost certainly, acute rheumatic fever. In 1824, Dr. Guldener von Lobes, Medical Superintendent for Lower Austria, testified that:

“[Rheumatic fever] attacked at this time a great many of the inhabitants of Vienna, and for not a few of them it had the same fatal conclusion and the same symptoms as in the case of Mozart.”

While written descriptions of Mozart as a child dwell on his otherworldly genius, they also – consistently – note his smallness, his apparent frailty, and his frequent illnesses. For example, a gent named Joseph Yorke wrote his brother from the Dutch city of The Hague in 1765, when Mozart was nine years old:

“We have got the little German boy [Mozart] here who plays upon the harpsichord like Handel, and composes with the same facility. He is really a most extraordinary effort of Nature, [though] our Professors of Medicine don’t think he will be long lived.”

At the time that letter was written – in 1765 – Mozart had already suffered one episode of rheumatic fever and was about to suffer a second. All told, Mozart suffered three, perhaps even four attacks of rheumatic fever during his childhood. Rheumatic fever primarily affects children, and recurrences typically become rarer with maturity. However, the general consensus regarding Mozart was expressed by Dr. Carl Bar, who wrote in 1967 that:

“Especially unaccustomed stresses can lead to an increased frequency of this kind of streptococcal infection [which is the trigger for rheumatic fever]. [Under these circumstances] rheumatic fever can become as common with adults as with children.”

“Unaccustomed stresses”. That phrase pretty much sums up Mozart’s life between 1789 and 1791, during which time his fame and popularity in Vienna disintegrated, his finances went to pieces, his marriage was on the rocks, he became clinically depressed and suffered one respiratory infection after another. What likely began as an infection – strep throat, for example – triggered a relapse of rheumatic fever that weakened Mozart to the degree that he could not survive the bloodletting to which he was subjected to on the evening of December 4, 1791. The bloodletting induced a stroke and death a couple of hours later.

For which we grieve to this day.