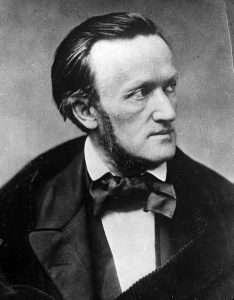 Richard Wagner photographed in Paris in 1861

156 years ago today – on March 13, 1861 – Richard Wagner’s opera Tannhäuser was first performed in Paris at the Théâtre Imperial de l’Opéra.

The Paris production of Tannhäuser remains one of the greatest operatic flops of all time: a scheduled ten-performance run that was reduced to three disastrous performances before the opera was withdrawn. Aside from its fabulous gossip value, it’s a story that must be told because it is this Paris version of Tannhäuser that continues to be the version performed today.

Richard Wagner had a checkered history with Paris and the Parisians. He lived there in terrible poverty between 1839 and 1842. He returned there in 1859 under very different circumstances: he was no longer an unknown and had, for the time being, some real money in his pocket. While in Paris this second time around, Wagner made friends in very high places, including Princess Pauline Metternich, the daughter-in-law of the former Austrian Chancellor Prince Clemens Wenzel von Metternich. It was thanks to the intervention of the Princess that in March of 1860 the French Emperor, Louis-Napoleon, commanded a performance of Tannhäuser at the Paris Opera.

Tannhäuser was not a new work. It had been premiered in Dresden back on October 19, 1845, and had been performed many times since. Wagner, understandably, was happy with the opera as it was. Nevertheless, he was expected to make some major changes to the opera in order to conform to Parisian “taste”, and thus the debacle.

Since its first flowering in the mid-seventeenth century, French operas had featured lengthy episodes of dance: of ballet. By the mid-nineteenth century, an invariable ritual had crept into the productions of the Paris Opera: all performances were required to have a lengthy ballet sequence during the second act. This was due to the demands of the Jockey Club, an elite sporting organization of wealthy and aristocratic gentlemen whose mistresses were the ballerinas in the corps de ballet. The men of the Jockey Club dined late, and thus could not be expected to occupy their boxes until the second act of a performance. Their power and prestige was such that no one ever dared question their tardiness or the balletic tradition it spawned.

Wagner was informed that he would have to provide a ballet in the second act of Tannhäuser, an act which is built around a singing contest “Not a chance, Vance” said Wagner, or words to that effect. Instead, he composed a lengthy chunk of music to accompany a balletic orgy held in the goddess Venus’ love pad smack-dab in the middle of a mountain. This “Venusberg Ballet” occurs immediately after the overture in Act One. Wagner figured that since he had provided the necessary ballet, the members of the Jockey Club could – on this occasion – show up for the first act.

After no fewer than 164 rehearsals, Tannhäuser opened on March 13, 1861. Among the audience was the Emperor and Empress Eugenie and their glittering, Second Empire retinue. As Wagner had hoped they would, the members of the Jockey Club did indeed show up for the first act. Unfortunately, they did not behave themselves. As soon as the Venusberg scene was over, they began to hoot and holler, and continued to do so through the remainder of the opera, a feat of stamina that must have caused some pretty hoarse voices the next day.

Any hopes that the member of the Jockey Club would be satisfied with ruining just the first performance were dashed during the second performance. This time they showed up with dog whistles, which were being sold outside the opera house by local entrepreneurs as “Wagner whistles.” We read that:

“The evening was little more than a contest of abusive whistling accompanied by snatches of Tannhäuser.”

According to the white-gloved gentlemen of the Jockey Club, the issue was not just the disrespect Wagner had shown to them; their actions were also payback for the support Wagner had received from the Austrian Princess Pauline Metternich, who the Parisians despised.

French Wagnerphiles like Baudelaire were mortified. “What will they say of Paris in Germany,” he wrote. “A handful of rowdies have disgraced us en masse!” (Watson, 176)

For Wagner, it was the last Parisian straw. He left and never returned to Paris again.

Richard Wagner was a very difficult person to feel sorry for. But feel sorry for him we must in the face of this Tannhäuser debacle.

Wagner’s original title for Tannhäuser was Der Venusberg – “The Mountain of Venus”. It was a title the original publisher – C. F. Meser of Dresden – objected to. Meser pointed out to Wagner that the opera – thus entitled – would become the laughing stock of the musical world. You see, “Der Venusberg” – “The Mountain of Venus” – is, in Latin, “mons veneris,” the contemporary medical term for the external parts of the female genitalia. Wagner “hastily” renamed the opera Tannhäuser and the Song Contest on the Wartburg, which over time has been shortened to Tannhäuser.

The great Johannes Brahms collected composers’ manuscripts and first editions. Despite the fact that he and Richard Wagner did not get along, Brahms was thrilled to add Wagner’s handwritten manuscript for the “Venusberg Ballet” to his collection in 1864 when it was given to Brahms by the pianist Karl Tausig. How Tausig got his hands on the manuscript is anyone’s guess, but as it turns out, it was not his to give.

A year later Wagner found out that Brahms had his “Venusberg” manuscript and he hit the roof. He ordered one of his minions – a composer named Peter Cornelius – to get it back. Cornelius wrote Brahms demanding the return of Wagner’s manuscript. Brahms, liking neither Cornelius’ tone nor Wagner’s actions in farming out the request to an underling, outright refused.

Ten years later, in June of 1875, Brahms received a letter from Wagner demanding that he return the manuscript. Wagner wrote:

“It can only be of value to you as a curiosity.”

Brahms, on agreeing to return the manuscript, replied:

“I do not collect curiosities. If you are going to rob my manuscript collection of such a treasure, it would please me very much if you would enrich my library with something else of yours.”

“To Herr Johannes Brahms, a well-conditioned substitute for a sloppy manuscript.”

Brahms was thrilled. He wrote back to Wagner:

“Your enclosure has given me such extraordinary pleasure that I can hardly manage with these few words to express to you my heartfelt thanks for the splendid gift that I owe to your generosity.”