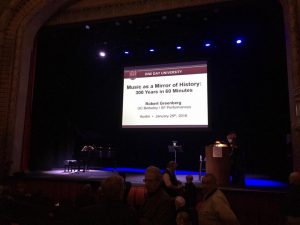 Before the One Day University presentation in Austin, Texas.

March 20 was a quiet – a very quiet! – day in music history. Thus, as I have done on other “quiet” Mondays, I’m using today’s post to tell a story and to editorialize a bit.

In 2016, I got involved with an operation called “One Day University”, founded by a visionary named Steven Schragis in 2006. A “one day university” typically (but not always) consists of four high-end professors each presenting a 75-minute program across the span of a single day. These one-day sessions are held in theaters and hotels in over 45 different locations across the United States. Thus far, I have participated in One Day Universities in Portland (Oregon), Sacramento, Austin, Phoenix, Fresno, and San Francisco; I will appear in New York City on March 25 (I’ll provide info about that session at the conclusion of this post).

I would share with you a One Day University experience I had back on November 12.

I was speaking at a One Day University program in Sacramento, California. I was last on the program. I had been immediately preceded by an Ivy League historian whose work – which is superb – I know well.

He was very good at that sort of “shoot-from-the-hip” professorial style that old pros can affect; in lieu of offering up a fully prepared lecture he PowerPoint posted a series of contemporary headlines and events and riffed on those headlines and events in a manner quite captivating. Those headlines and events were compelling, as the national election had taken place just four days before. His remarks were pointed, as were the questions he received from the audience. By the time he left the stage the audience – which was large; probably upwards of 1000 people – was pretty worked up.

I took the stage feeling as impotent as Bob Dole shilling for Viagra (remember those ads?). By comparison, my material – music written by dead European white men – felt not just trivial but even inappropriate given what had just been discussed.

In the months since I’ve had time to think about this, and I’ve reached the most satisfying conclusion that our art is more important, more lasting, more real and substantial and certainly more inspirational than our politics.

Our music – be it by Bach, Haydn, Mozart, Beethoven, Brahms, Brubeck, the Beatles, Bruce Springsteen, Jimi Hendrix, Dylan, Prince, Charlie Parker, Duke Ellington, whomever – our music is not trivial or escapist; it is, like our families, friends, spiritual beliefs and Amazon Prime, something we live for, something intrinsic to our humanity; something that represents the very best of who and what we are. When we listen to J. S. Bach or Bruce S., we are elevated and experience nothing less than transcendence. The aesthetic impact of the musical experience; the expressive meaning of the music; the time and place that saw its creation; and the life and personality of its composer all combine when we listen to create a holistic experience that transcends time and place and renders us – to my mind – susceptible to divine influence. This is the power of art: to universalize experience; to tell stories through metaphor and analog that both resonate with our own experience and enlarge it; to obliterate the temporal and physical barriers that would separate us from one another and instead, unite us in spirit with the people and cultures of other times and places.

Having now framed these thoughts I feel a lot better about my content vis-à-vis current events than I did back at my One Day University session in Sacramento back on November 12.

I would invite you all the check out One Day University. It is a wonderful organization that delivers something we crave more than ever today: intellectual stimulation, content and meaning. For those of you in the New York metropolitan area, I would extend a special invitation to attend the One Day University on Saturday, March 25 at Symphony Space, 2537 Broadway at 95th Street, New York, NY.