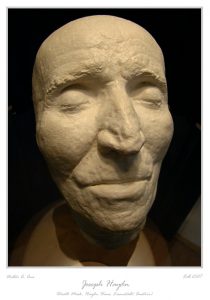 Haydn’s death mask, photographed in 2007 by Walter A. Aue

On this day in 1808, Joseph Haydn made his last public appearance at a performance of his oratorio The Creation given in honor of his upcoming 76th birthday. The performance – which took place at Vienna’s University Hall – was what we would call today a “star-studded event”: everyone who was anyone in Vienna’s musical world was there, including Beethoven, Salieri, and Hummel.

At a time when the average European life expectancy was just 33.3 years, Haydn remained a remarkably healthy man well into what was then considered to be old age. Having never travelled outside the immediate vicinity of his birth, Haydn undertook the arduous journey to England in 1791 at the age of 59, and then again in 1794, at the age of 62. Still composing masterworks into his 69th year (he complete his oratorio The Seasons in 1801), Haydn was considered an ageless wonder by everyone around him.

Sadly, no one of us is truly “ageless”, and time caught up with Haydn when he was in his late sixties. Though he lived until 1809, his last years were marred by increasingly bad health. His symptoms – swollen legs, exhaustion, failing memory – point to a general case of arteriosclerosis, or “hardening of the arteries.” While symptoms of the disease first became apparent in 1799, Haydn’s health declined precipitously after 1805, by which time, at the age of 73, he was an invalid.

However, Haydn had the rare pleasure of knowing that in his old age he had not been forgotten. From every corner of Europe, medals, awards, honors and proclamations poured in to his modest little house in the Viennese suburbs. Any visit to Haydn’s house included a ceremonial examination of his awards, and we are told that when he became depressed in his last years he drew solace from these tangible signs of his success.

The last great moment of Haydn’s life occurred on March 27, 1808, 209 years ago today, when a performance of The Creation was held in honor of his 76th birthday. Haydn was formally invited, and his physician allowed him to attend. It was clear to all of Vienna that Haydn was approaching his end, an as a result the performance became a mystical, almost religious event. Haydn rode to the University in Prince Esterhazy’s own carriage. A huge crowd had gathered in front of the performance hall that had to be held in check by military guards. Haydn was carried in an armchair into the performance hall, there to be greeted by the high nobility and distinguished musicians, including – as previously noted – Beethoven, Salieri and Hummel. When Haydn entered the hall a fanfare was sounded, and the audience spontaneously chanted “Long live Haydn!”

Haydn was seated with the highest aristocracy, next to Princess Esterhazy. When she saw him shiver she took off her own shawl and put it over his shoulders. When the ladies around her saw what the Princess had done they followed suit; Haydn was soon covered with some very pricey lady’s clothing. (I trust this was kept to outerwear.) Aside from the lady’s clothing, Haydn was wearing some of his medals and awards, among them a gold medal he had received from the Concerts des Amateurs in Paris. The French ambassador, seeing this, said: “This medal is not enough; you should receive all the medals that are distributed in the whole of France.” Poems written for the occasion in German and Italian were presented to the composer by his friends. The performance was conducted by Salieri; the concertmaster was the great violin virtuoso Franz Clement. The audience was ready to party, so when the chorus intoned the words “Let there be light – and there was light” they went wild, whooping and screaming and bravoing. The performance had to be halted for a number of minutes while the audience cheered and wept, all the while looking towards Haydn in his box. All in all, it was a glorious night for Haydn.

The reception Haydn received that night was unique in the history of Western music. Neither Bach, Mozart, Beethoven, Schubert, Brahms (nor any other great composer for that matter) ever experienced such a valedictory moment. Haydn never appeared in public again. He died – “blissfully and gently” – a year later, shortly after midnight, on May 31, 1809. One of the last things Haydn was conscious of before he died was the bombardment of Vienna on May 12 – 13 and its subsequent occupation by Napoleon’s army. A bitter pill, no doubt, for the man who had composed the Austrian national anthem. His last words were “Children, be comforted. I am well.”