Music History Monday: The “Other” Bernstein 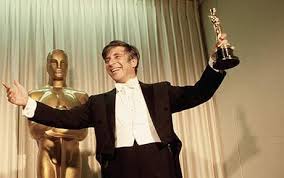 Mr. Bernstein receiving his Oscar in 1968

Since virtually nothing of note in the concert music world took place on April 3rd (aside from the appearance – today – of this post), we turn to April 4th for the subject of today’s post, which marks the birth (in 1922) of one of my all-time favorite composers, Elmer Bernstein.

Oh, you might not know his name, but you almost certainly know at least some his music.

Permit me a brief rumination on guilty pleasures.

It seems to me that there are certain things in life that we do for no other reason than the unqualified pleasure they provide. For example, I consume peanut butter, very dry Bombay Sapphire martinis, and The Game of Thrones not because they are good for me but because I must. I feel the same way about good film scores. I myself have never written any movie music and my own compositions have, stylistically, almost nothing in common with that of most film composers. (Although, I would point out that a number of high-end concert composers have indeed turned out some superb film scores, including Aaron Copland’s The Red Pony; Leonard Bernstein’s On the Waterfront, and John Corigliano’s Altered States and The Red Violin.)

For me, then, listening to movie music constitutes a guilty pleasure. And it is a pleasure I indulge frequently because I love good movie music. Among my favorite film composers are Max Steiner, Bernard Herrmann, Maurice Jarre, Jerry Goldsmith, Ennio Morricone, James Horner, and of course, the ubiquitous John Williams. But my favorite film scores were composed by Elmer Bernstein (pronounced “BERN-steen” with no relation to Leonard “Bern-stine”).

Born in New York City to Jewish immigrant parents from Ukraine, Bernstein appeared to be headed for a concert music career. He made his professional debut as a pianist in New York’s Steinway Hall at the age of 15 (he concertized for a living from 1939 to 1950). Encouraged to compose by none-other-than Aaron Copland, Bernstein studied with Roger Sessions and Stephan Wolpe and produced a sizable body of concert music. But that all changed when Bernstein wrote his first film score in 1950, for a movie called Saturday’s Hero (which was released by Columbia in 1951).

Ka-boom. Soon enough Bernstein’s career took off like a rocket (and I’m talking about a Saturn V and not one of those explode-at-liftoff North Korean jobbers). Between 1951 and 2002, he composed the music for over 200 films and for hundreds more TV shows. He composed the scores for two Broadway musicals: How Now Dow Jones (1967) and Merlin (1983). Nominated for 14 Academy Awards, he won an Oscar for only one score (rip-off!), Thoroughly Modern Millie (1967). Along the way he won two Golden Globe Awards, an Emmy, and was nominated for two Grammy Awards.

Let us add to that list my two favorite Bernstein scores: those to The Magnificent Seven (1960) and To Kill a Mockingbird (1962). Anyone who watched television in the late 1950s and early 1960s would recognize the music used in ads for Marlboro cigarettes as being the opening theme for The Magnificent Seven. And if the opening credit music to To Kill a Mockingbird doesn’t tear your heart out, you have no heart to start with.

Last but not least, Bernstein had a reputation in the industry as being a wonderful collaborator and an all-around good guy.

Sadly, Bernstein is no longer with us; he passed away on August 18, 2004. Nevertheless, let us all lift a very dry Bombay Sapphire martini (or at very least a glass of club soda with a twist of lime) to the 95th anniversary of Elmer Bernstein’s birth. Salut!