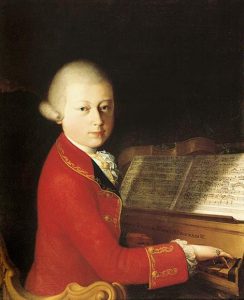 Mozart in Italy at age 14, painted by Saverio dalla Rosa

As is sometimes the case, the lack of notable musical events on our “appointed” date (in today’s case, April 10) requires that we shimmy forward (or back) a day for relevant material; thus:

On April 11, 1770 – 247 years ago tomorrow – a choral performance took place in Rome that was the source of one of the most famous stories in the entire history of Western music. Here’s the story.

On December 13, 1769, the then 13 year-old Wolfgang Mozart and his father left their hometown of Salzburg for what would be the first of three extended tours of Italy. Working their way south, they arrived in Rome on Wednesday, April 11, 1770, four days before Easter. They were just in time to hear the Papal Choir perform Gregorio Allegri’s Miserere in the Sistine Chapel. Allegri’s Miserere is a setting of Psalm 51, which consists of 20 lines. Here are its first three:

Have mercy upon me, O God, after Thy great goodness

According to the multitude of Thy mercies do away mine offences.

Wash me thoroughly from my wickedness: and cleanse me from my sin.

Allegri (1582-1652) composed his Miserere sometime in the late 1630s, during the reign of Pope Urban VIII. It was performed exclusively in the Sistine Chapel (the papal chapel) during the Tenebrae (or “darkness”) service sung at dusk on Holy Wednesday and Good Friday (during the week prior to Easter Sunday). The piece runs between 12 and 13 minutes in performance. It is composed for two choirs: one consisting of four parts and the other of five parts. At the very end the two choirs come together in nine parts. Having heard the Miserere performed in the Sistine Chapel, Mozart and his father retired to their lodgings where Mozart sat down and wrote it out. Mozart father and son returned to the Sistine Chapel two days later on Good Friday to hear the Miserere again, after which Mozart made a few corrections to his transcription and that was that.

Leopold Mozart – Wolfgang’s father, teacher, valet, editor, booking agent, press agent, and huckster supreme – understood this to be marketing manna from heaven. He spread the story far and wide, despite the fact that the Miserere was, presumably, the exclusive property of the Sistine Chapel and thus the exclusive property of the pope himself! Leopold wrote to his wife:

“You have often heard of the famous Miserere in Rome, which is so greatly prized that the performers in the chapel are forbidden on pain of excommunication to take away a single part of it, to copy it or give it to anyone. But we have it already. Wolfgang has written it down. We shall bring it home with us. As it is one of the secrets of Rome, we do not wish to let it fall into other hands.”

Leopold’s wife – Wolfgang’s mama – wrote her husband back and expressed fear that they could get themselves in some really hot holy water for having “revealed” the Miserere to the world. Leopold assured her that all was chill:

“There is not the slightest cause for anxiety. All Rome and even the Pope himself knows that he wrote it down. There is nothing to fear; on the contrary the achievement has done him great credit.”

The story created a sensation, and it’s a story we still tell today; witness this post. Except. Except that like any good huckster/hawker/carnival-barker, Leopold exaggerated. Taking nothing away from Wolfgang’s astonish feat of musical memory, we are honor bound to make some factual observations.

Fact: the Miserere is not nearly as complex a work as Leopold and posterity would have us believe. For the great bulk of the piece, the two choirs alternate with each other: one of them sings a straightforward version of the original Miserere chant, while the other responds with an embellished version. This material is repeated five times. And in fact, there were copies of Allegri’s Miserere floating around, and one of those copies was in Vienna. Had Wolfgang seen a copy at some point? Perhaps. Look, what Mozart did by writing it down from memory was amazing enough, but it was not the divine miracle Leopold made it out to be.

Still, Leopold played it for all it was worth. He had the chutzpah to petition Pope Clement XIV to reward Wolfgang for his act of musical larceny, and that petition was granted! The Mozarts were called before the pope and Wolfgang was awarded the Chivalric “Order of the Golden Spur”.

The parchment conferring this papal knighthood, dated July 4, 1770, remains in the Vatican archives. It praises Mozart for having excelled in “suavissimo cymbali sonitu”, meaning literally “the sweetest sound of cymbals”, since his earliest childhood.

For our information, that parchment document was put on display in Rome’s Capitoline Museum in February of 2011.

For our information, part two: the ban on outside performances of the Miserere was lifted in 1870.