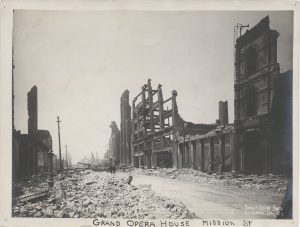 The post-earthquake-and-fire remains of the Grand Opera House at No. 2 Mission Street.

I have a particular affection for the date April 18. (Yes: I know this post is about a musical event that took place on April 17; bear with me.)

Back, momentarily, to April 18th and a few of the events that mark this auspicious date. On April 18th 796, King Æthelred of Northumbria (son of Æthelwald and Æthelthryth, no less!) was assassinated in the northern English town of Corbridge. The assassins were lead by two of his ealdormen (old English for “elder men”, meaning high-ranking royal officials) Ealdred and Wada. Bad dudes, both.

On a more recent note, it was on the evening of April 18, 1775 that the silver smith Paul Revere rode through the Massachusetts countryside crying, “the British are coming!”. It was on April 18, 1923 that Yankee Stadium – “the house that Babe Ruth built” – opened in the Bronx. On April 18, 1942 Lieutenant Colonel James “Jimmy” Doolittle of the United States Army Air Force led the first American air strike on Japan. On April 18, 1954, Gamal Abdel Nasser seized power in Egypt. On that very same day, 9014 kilometers (5601 miles) away, in Brooklyn N.Y., I was born, which explains my particular affection for April 18.

But for our purposes, the big event on April 18 occurred in San Francisco. At 05:12 AM local time an estimated 7.8 magnitude earthquake occurred on the San Andreas Fault at a depth of five miles, its epicenter just offshore (west) of the city. Radiating outward from San Francisco, the earthquake ruptured the San Andreas Fault for 296 miles. It was felt from Oregon in the north to Los Angeles in the south and all the way to central Nevada to the east. On either side of the fault line the earth was displaced by as much as 28 feet. In San Francisco, the earthquake and subsequent fire killed roughly 3000 people and destroyed a full 80% of the city.

At the time of the quake, San Francisco was the jewel, the “Queen City” of the American West. With a population of approximately 410,000 it was the most populous city as well as the financial and cultural capitol of the Western United States. San Francisco’s buildings were the tallest, its restaurants the finest, its entertainments the most varied (and risqué) and its factories the most productive in all of the Western United States.

When it came to entertainment San Francisco audiences particularly loved opera, and while the “San Francisco Opera” as it exists today wasn’t founded until 1923, the city was a major destination for the traveling troupes that crisscrossed the country at the turn of the twentieth century. In 1907, one of those “troupes” was none-other-than the Metropolitan Opera Company of New York, which had packed up its singers, orchestra players, music, sets, props, instruments and costumes and gone on tour. After performing in Baltimore, Washington D.C., Pittsburgh, Chicago, St. Louis and Kansas City, the company crossed the Great Divide and arrived in San Francisco, there to perform Georges Bizet’s Carmen on the evening of April 17, 1907: 110 years ago today.

The Met performance was the musical and social event of San Francisco’s season. The performance was to be held at the palatial Grand Opera House at No. 2 Mission Street (which would be reduced to cinders just hours after the performance).  The 34 year-old tenor Enrico Caruso – the most famous singer in the world at the time – played the role of Don Jose; the almost equally famous soprano Olive Fremstad sang the role of Carmen.

The performance was a triumph. Caruso, who was staying at the Palace Hotel just a few blocks from the opera house, remembered:

“I had a room on the fifth floor, and on Tuesday evening, the night before the great catastrophe, I went to bed feeling very contented. I had sung in Carmen that night, and the opera had gone with fine eclat. We were all pleased, and, as I said before, I went to bed that night feeling happy and contented.”

He certainly didn’t wake up feeling happy and contented:

“What an awakening! On Wednesday morning I wake up about 5 o’clock, feeling my bed rocking as though I am in a ship on the ocean, and for a moment I think I am dreaming that I am crossing the water on my way to my beautiful country. And so I take no notice for the moment, and then, as the rocking continues, I get up and go to the window, raise the shade and look out. And what I see makes me tremble with fear. I see the buildings toppling over, big pieces of masonry falling, and from the street below I hear the cries and screams of men and women and children.”

The stories of what happened next differ. One of them has Caruso brandishing an inscribed and signed portrait of then-President Teddy Roosevelt, thanks to which the military police allowed him to leave the city. Another story has Caruso sitting on one of his steamer trunks sobbing uncontrollably; another describes him as running around “half-crazed”.

Here’s what we do know. His trusty valet Martino got Caruso dressed and safely out of the hotel, and then managed to retrieve Caruso’s baggage before the presumably “fireproof” hotel burned. They spent the night on the ground at San Francisco’s Union Square. Early the next day, Martino managed to hire a man with a horse cart to take them to the Oakland Ferry, which – perhaps thanks to the signed photo of Teddy Roosevelt – they managed to board. We’ll let Caruso finish the story:

“When we arrive at Oakland we find a train which is just about to start. The officials are very polite, take charge of my luggage, and tell me go get on board, which I am very glad to do. The trip to New York seems very long and tedious, and I sleep very little, for I can still feel the terrible rocking which made me sick. Even now I can only sleep an hour at a time, for the experience was a terrible one.”

As for the Metropolitan Opera traveling company, it was a time of mixed blessings. Incredibly, not a single member of the company was badly hurt. But everything else was a total loss, as the sets, properties, costumes, and most of the instruments were reduced to cinders.

And Caruso? He swore never to return to San Francisco. (Unfortunate but not terrible, as another noted singer of Italian heritage – Anthony Dominick Benedetto, a.k.a. Tony Bennett – subsequently made San Francisco his second home.)