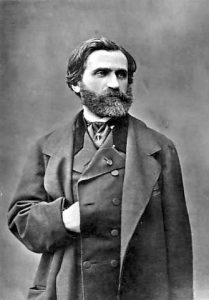 The two years between March of 1851 and March of 1853 saw the premieres of three operas by Giuseppe Verdi that cemented, for all time, his reputation as the greatest Italian-born composer of operas since Claudio Monteverdi: Rigoletto, Il Trovatore, and La Traviata.

To say that Giuseppe Verdi was the most famous and beloved living composer working in Italy at the time of the premiere of La Traviata is like saying that Babe Ruth was the most famous and beloved baseball player in 1930: a statement so obvious that it hardly bears mention. So it might come as something of a surprise that the premiere of La Traviata was one of the greatest disasters of Verdi’s long and storied career: a “fiasco” in contemporary parlance.

Verdi’s opera Il Trovatore received its premiere on January 19, 1853 in Rome. While in Rome, Verdi had a piano installed in his rooms, so that he could get to work composing his next opera even while he oversaw the production of Il Trovatore. That next opera – La Traviata – was scheduled to be premiered in Venice on March 6, 1853 – just 46 days after the Roman premiere of Il Trovatore. Does that sound like a crazy schedule to you? Yes, crazy.

Based on a play by Alexander Dumas fils entitled La Dame aux camelias (“The Woman of Camelias”), La Traviata (“The Lost Woman”) is about a drop-dead gorgeous high-end hooker who falls in love with the purest of men even as she wastes away and dies of tuberculosis. The opera’s libretto – written by Francesco Piave – gives the name of the “courtesan” as Violetta Valery and her boyfriend as Alfredo Germant.

Just a few days after returning home from the Roman premiere of Il Trovatore, Verdi was on his way to Venice to oversee the production of La Traviata. It would seem, that Verdi had finally – truly – over-committed himself. He was exhausted, sick, and had found it difficult to work on La Traviata while he’d been in Rome. He arrived in Venice on February 21, exactly two weeks before the scheduled premiere.

The production had the look of a catastrophe from the beginning. Problem number one: Verdi had not had time to orchestrate a single note of La Traviata before his arrival in Venice; rehearsals had to be conducted from a piano/vocal score. Problem number two: the La Fenice season – which began on December 26 and which was to end with La Traviata – had been, increasingly, a mess, with one opera – Carlo Bosoni’s La Prigioniera (“The Prisoner”) booed off the stage and another (Verdi’s own Ernani) received very coolly. Problem number three: the prima donna contracted to sing Violetta – a character described as “a beautiful flower of youth, wasted away with consumption” was Fanny Salvini-Donatelli, a significantly overweight, less-than-beautiful, 38 year-old singer whom Verdi had not been told about before hand. When this little casting detail was revealed Verdi hit the roof. But under his contract the deadline for making changes to the cast had passed weeks before. Verdi admitted that there was nothing he could do, though the librettist Francesco Piave wrote that the theater management was:

“Artistically wrong because the soprano and the ENTIRE CAST, for that matter, are unworthy of a great theater. Fine, let it be the soprano Salvini, but I declare that if the opera is performed, I have no faith whatsoever that it will succeed. On the contrary – it will be a complete fiasco.”

Piave was correct. Oh, the premiere performance began well enough; the Prelude/Overture was so well received that Verdi was called out for bows. And on the strength of the overture the first of the three acts was greeted with polite applause. But during the second act everything fell apart. Every time the pink, chubby, over- aged soprano Fanny Salvini-Donatello coughed – signaling her imminent demise from consumption – the audience roared with laughter, thus giving new meaning to the line, “it ain’t over ‘till the fat lady sings.” Well, Fanny Salvini-Donatello sang, and it was over. (Please note: I am not body shaming here, just reporting.) The laughter turned to hissing and whistling and Verdi had a catastrophe on his hands.

After the performance Verdi returned to his hotel room and dashed off a number of letters, including this one to his friend and colleague, Emanuele Muzio, perhaps the single most famous letter Verdi ever wrote:

“La Traviata, last night, a fiasco. Is it my fault or the singers’? Time will tell.”

Verdi did not have to wait for very long to find out. Soon after “the fiasco”, he was approached by a group of Venetians. They wanted to stage the opera in Venice once again, but in the smaller Teatro San Benedetto. Verdi was assured that it would be cast properly and that there’d be lots of time to rehearse it. Verdi’s interest was piqued, and after some initial reticence he gave his permission for the production to proceed. This “new and improved” production of La Traviata opened on May 6, 1854, and this time around, the Venetians went nuts over, absolutely wild. Verdi – who was in Paris at the time of the performance – was informed by his publisher Tito Ricordi that:

“I have to tell you that there was never a success in Venice like that of La Traviata. There was an uproar of indescribable applause, and even [the producer] Antonio Gallo had to take a curtain call from his place in the audience – a novelty, but that is what really happened.”

Verdi’s comment upon hearing the news demonstrates well his cynicism towards his audiences:

“Practically the same audience as before was seeing the same opera. Then it was a fiasco; now it is creating an uproar.”

And so La Traviata continues to create an uproar!