Four years ago today, the pianist, cultural icon and “Cold War Musical Envoy” Van Cliburn died at his home in Fort Worth Texas. He was 78. Van Cliburn’s celebrity was shaped not just by his talent but also by what were – and remain – earth-shaking historical events.

Joseph Stalin – “the Leader and Teacher; the Friend of Children; the Great Helmsman; the Great Father of the Nation; the Great Railway Engineer” – was born in 1878. He initially rose to power in 1924; by 1927 he had crushed all opposition to become the all-powerful Soviet dictator that he remained until his death in 1953.

Stalin was also a butcher, and while the numbers vary, the eminent English historian Norman Davies claims that Stalin was responsible for the deaths of some 50 million human beings – excluding wartime – between 1924 and 1953. Stalin could not have done it alone, however, and he surrounded himself with a cadre of ruthless goons and henchmen disguised as “government officials”. 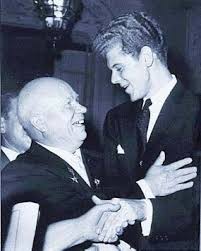 Van Cliburn with Nikita Khrushchev in Moscow in 1958.

Among those henchmen was Nikita Sergeyevich Khrushchev (1894-1971). Khrushchev was a short (5’3”), round, peasant-born operative who did what he was told to do, which included strapping on the leather apron and rubber gloves of the Soviet executioner. But he had a spark of greatness in him; a spark that compelled him to seek redress for the evils of Stalinism once he came to power in 1953.

Here’s what Khrushchev had to say in his memoirs about his former boss, memoirs written in the late 1960s, smuggled to the West, and published after Khrushchev’s death:

“Stalin called everyone who didn’t agree with him an ‘enemy of the people.’ As a result, honest people perished. Everyone lived in fear in those days. Everyone expected that at any moment there would be a knock on the door in the middle of the night and that knock on the door would prove fatal. People not to Stalin’s liking were annihilated, honest party members, irreproachable people, loyal and hard workers for our cause who had gone through the school of revolutionary struggle under Lenin’s leadership. This was utter and complete arbitrariness. And now: is all this to be forgiven and forgotten? Never!”

On February 25, 1956 Nikita Khrushchev delivered his famous “secret speech” (which was anything but secret) during which he denounced Stalin to the Twentieth Congress of the Communist Party. In the four hours Khrushchev spoke, he demolished Stalin’s reputation and portrayed him as being “savage, half-mad and power-crazed.”

Yes, Russia was still a totalitarian police state, the Big Red Machine; the threat of global nuclear annihilation still hung over us all like the blackest of clouds; but at least the Stalinist terror was over.

And so began the “Thaw”. The Thaw spanned the years from the denunciation of Stalin in 1956 to Khrushchev’s ouster in 1964. During the Thaw, domestic repression and censorship were significantly scaled back and well over a million non-political and political prisoners were released from the Gulag. Nowhere, however, was the impact of the Thaw felt more powerfully than in the arts. This is not to say that the censors, ideologues, artists’ committees and bureaucrats suddenly disappeared during Khrushchev’s Thaw and that freedom of expression reigned triumphant. Oh no; Western artists would have found the restrictions prevalent during the Thaw to be absurdly intrusive. As always, we must measure Khrushchev’s reforms relative not to Western standards but rather, relative to spirit-crushing artistic restrictions of Stalin’s time.

It was in 1958 – during the Thaw – that the Soviets created the International Tchaikovsky Competition. (In that first year, only pianists and violinists competed; in the years since, cello and voice have been added.) The event was designed to showcase the presumed superiority of Soviets culture during those frigid days of the Cold War, just as the launch of Sputnik in October of 1957 had been propagandized as a “victory” for Soviet technology. 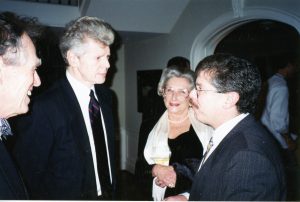 Among the competitors that year was a tall, slim, bushy-haired, boyish, not-quite-24-year-old Juilliard-trained pianist named Harvey Lavan Cliburn, Jr. Nicknamed “Van”, he’d been born in Shreveport, Louisiana, raised in Kilgore Texas, and looked every inch the American “innocent”. But he didn’t play the piano like an innocent, and his performance during the finals – of Tchaikovsky’s Piano Concerto No. 1 and Rachmaninoff’s Piano Concerto No. 3 – so dazzled his Moscow audience that they gave him an eight-minute ovation, chanting “First prize! First prize!” When the time came to announce the winner, the judges were in a tizzy. They needed to cover their derrieres, so before it was announced that they had awarded the first prize to an American from Texas they checked with the Soviet Premiere Nikita Khrushchev to make sure it was okay. Khrushchev’s famous reply: “Is he the best? Then give him the prize!”

22 years after Jesse Owens had entered the lion’s den at the Berlin Olympics and won four gold medals, Van Cliburn had likewise triumphed on enemy turf. But unlike 1936, Van Cliburn was proclaimed a conquering hero by both the Americans and the Soviets, and his victory did much to soften hearts and open minds across the East-West divide.

He returned to the United States to a ticker-tape parade in New York – the first and only such parade ever given to a concert musician – and his picture appeared on the cover of Time Magazine. An American icon and a true cultural ambassador, he continued to concertize in the Soviet Union and then Russia into the twenty-first century, always to the greatest acclaim.

A personal note. I had the honor of working with Van Cliburn at his foundation in Fort Worth Texas in 1996. He was a true gentleman: soft-spoken, self-effacing, unfailingly polite, kind and generous.