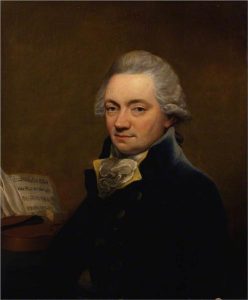 Johann Peter Salomon in 1792, at the time of Haydn’s first London residency, painted by Thomas Hardy

Today we celebrate the birth – on February 20, 1749 – of the violinist, composer, and impresario Johann Peter Salomon. His name is relatively unknown today, yet without him the musical legacy of the late eighteenth century would be much the poorer.

Let us contemplate, for a moment, the massive, gleaming 6.5-liter engine that powers the Lamborghini Aventado SV (superveloce, meaning “super velocity), a V-12 monster that generates 740 horsepower and 509 pound-feet of torque; the beating heart of a $500,000 sports car. Be still our hearts. Now imagine next to it a mundane case of motor oil, $36.99 at Costco. Nothing sexy there. Except for the fact that without the oil – the engine’s life-blood – that Lamborghini V12 cannot function.

So it is with most things in our world. We are aware of the glitzy surfaces of things, people, and organization but rarely think twice about the life-blood that allows them to tick. A symphony orchestra or an opera company? Without the union steward and back stage crew nothing happens. A Federal District Court or even SCOTUS? Without their law clerks they couldn’t function for a day. Yes: from the guy who inflates (or doesn’t inflate) Tom Brady’s footballs to the gaffer (chief electrician) who sets the lights on a movie set, it’s the “little people” who grease the skids of life, who make things happen, whose hard work, knowledge and professionalism make it possible for other people to reap fame and the big bucks.

A concert promoter is such a person: that individual who programs, organizes, finances, promotes, and stages concerts; people whose cleverness, commitment, sweat, charm, and pure determination create the circumstances that allow our favorite composers and performers to flourish. In earlier times, such a person was called an “impresario”, a word born in the mid-eighteenth century from the Italian “impresa”, meaning enterprise, business, or management. Some impresarios were themselves outsized personalities and became quite famous in their time: Serge Diaghilev, Florenz Ziegfeld, Sol Hurok and Bill Graham come immediately to mind. But in my experience, most concert producers/impresarios do not have outsized egos, which is why they are willing and able to work behind the scenes in order to put others in the limelight.

Such a relatively quiet impresario was Johann Peter Salomon. He was by all accounts a brilliant violinist and the composer of numerous works, including six operas, various concerti, and an oratorio. And while his music is forgotten, his career as an impresario will be long remembered.

He was baptized (and presumed born) on February 20, 1749 in the Rhineland city of Bonn. By extraordinary coincidence, he was born in exactly the same house – at Bonngasse 515 – as Beethoven would be born 21 years later. Like Beethoven, Salomon’s father was also a musician in the employ of the Electoral court, and the families knew each other well. (When Beethoven heard of Salomon’s death in 1815 he wrote his friend Ferdinand Ries, “Salomon’s death grieves me much, for he was a noble man, and I remember him since I was a child.”)

Salomon moved to London in 1781 at the age of 22. London remained his base of operations for 34 years, until his death in November of 1815. He began producing concerts in 1783 and quick established a high-end reputation. According to the music historian H. Robbins Landon, “Salomon was not only a clever and sensitive impresario, he was also generous, scrupulously honest, and very efficient in business matters.”

Pretty much all the qualities we look for in a colleague of any sort, or so I think.

In 1790 Salomon the impresario scored his greatest coup. In September of 1790 Salomon was in Germany – on his way to Italy – when he heard of the death of the fabulously wealthy Hungarian nobleman Prince Nicholas Esterhazy. Among Prince Nicholas Esterhazy’s employees – for 28 years, no less – was the 58 year-old Joseph Haydn, whose music had made him the single most popular composer in London.

Salomon wasted not a moment: he took the first available coach to Vienna. Unbidden and unannounced, he showed up at Haydn’s house, knocked on the door, and introduced himself with these words: “I am Salomon of London and have come to fetch you. Tomorrow we will arrange an accord.”

The “accord” they arranged was a sweet one. Haydn would travel to London, there to live and work for a year or two. For starters, he would receive 300 pounds for composing a new opera, an opera that would be produced at the Kings Theater. Haydn would then receive another 300 pounds to compose six symphonies and an additional 200 pounds for the copyright to them. In addition to that, Haydn was to receive another 200 pounds to write 20 smaller works, to be performed by him at 20 concerts and he was guaranteed yet another 200 pounds for performing at a concert at which all the proceeds would go to Haydn himself. Salomon paid Haydn a 5000 florin down payment on the spot, an amount equal to 6½ years of his salary under Prince Nicholas Esterhazy.

Haydn’s “Most Excellent English Adventure” lasted for 18 months. It was such a spectacular success that Salomon was able to induce Haydn to return for another 18 months between 1794 and 1795. The creative fruits of these visits are of inestimable value; among other works, they include Haydn’s last twelve symphonies, the so-called “London” or Salomon” symphonies. Each one is a first tier masterwork, and along with Mozart’s last three symphonies they were the foundational models for Beethoven when he began composing symphonies just a few years later.

Two fascinating Salomon factoids. Salomon is said to have suggested the text Haydn set in The Creation of 1798, and is likewise credited with giving Mozart’s final symphony its nickname: “The Jupiter”.

He is buried in Westminster Abbey where the tablet that marks his tomb is inscribed: