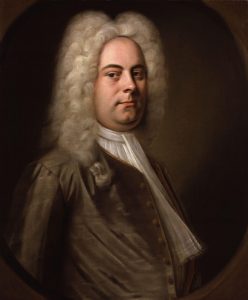 Handel, in a painting attributed to Balthasar Denner, painted circa 1726-1728 (at the time Handel became a British citizen).

Immigrants and immigration. Hot button topics these days, though I would strongly suggest we take the long view here. If there’s one thing both history and biology have taught us is that the richer the gene pool, the stronger, more competitive and more creative we are and the more tolerant of and adaptable to new ideas and experiences we become.

In 1712, George Friedrich Handel (his Anglicized name) left Germany and settled permanently in London. His departure was motivated by that most common reason to emigrate: economic opportunity. Though only 27 years old, Handel was already an accomplished composer of Italian-language opera. London offered him an extraordinary opportunity: it was a huge and hugely wealthy city, the population of which was only just beginning to develop a taste for Italian-language opera. Moreover, London had no resident opera composer of any note of its own. Handel correctly reasoned that by setting up shop in London and composing and producing Italian opera he could quickly become a very large musical fish in a very large pond. And that is precisely what happened.

Handel’s presence in London put English music on the international map. His astonishing success was a function of his musical genius, his personal geniality, his ambition and industry, and the remarkably savvy way he went about ingratiating himself to English audiences, across the demographic board. You see, from day one Handel composed not just Italian-language opera for the nobility, but English language works for the Church, the public, and for the royal family.

The first such work composed for the royal family was Handel’s Ode for the Birthday of Queen Anne, which was performed at Court on February 6, 1713. Five weeks later – on March 19, 1713 – Handel’s Te Deum and Jubilate in celebration of the Treaty of Utrecht (which brought an end to the War of Spanish Succession) was publicly rehearsed in Whitehall before its “official” premiere at St. Paul’s Cathedral. Handel’s Te Deum was the most important piece of religious music composed in England since the death of Henry Purcell 18 years before, in 1695, and the English knew it. Handel went out of his way to study the music of Purcell, and he cultivated a musical style custom-made for English tastes: a style that featured the compact melodic phrase structures of English songs, anthems, and hymns; a style light on melodic embellishment but strong on complex polyphony; a style more “magnificent” than intimate.

In 1714 – two years after settling in London – the already successful Handel caught what turned out to be a career break: his former boss, Prince George Ludwig, the Elector of Hanover, was crowned the first Hanoverian King of England: George I. Handel’s first significant composition for George I was the Water Music, which was written in 1717 for a royal procession up the Thames.

Nevertheless, as a foreign alien Handel was not allowed to compose music used exclusively for royal occasions. And this is where Handel’s amazing good luck and timing kicked in yet again. On February 13, 1727, having realized that his fortunes were inextricably tied to both London and the Hanoverian Dynasty, Handel petitioned Parliament to become a British citizen. (For our info: until 1844 a foreign-born resident could only become a British citizen by means of an Act of Parliament.  This process was known as “naturalization” and required individuals to take an “oath of allegiance and supremacy” as well as produce a certificate testifying that they had received Holy Communion according to Anglican rites.)

Handel’s petition was granted three days later – on February 16, 1727 – when King George I himself rubber stamped it, stating in Norman French, “Soit fait comme il est desiré”, meaning: “Let it be done as it is desired”

Less than four months later, King George I, who had reportedly been in “splendid health” suddenly died of a stroke. It was Handel, now a citizen of England, who was called on to compose the music the inauguration of King George II. He composed four so-called “anthems” for orchestra and chorus that were performed during the coronation ceremony. One of these anthems – Zadok the Priest – has been used at every English coronation since.

Other royal commissions followed: Handel was commissioned to compose the music for the marriage of Frederick, the Prince of Wales, in 1736. In 1737, he supplied the funeral music for George II’s wife, Queen Caroline. In 1743 he composed The Dettingen Te Deum and Anthem following George II’s victory at the Battle of Dettingen during the War of Austrian Succession. In 1743 Handel composed the oratorio Judas Maccabeus to celebrate the victory William Augustus, Duke of Cumberland (another of George II’s sons) at the Battle of Culloden in the Scottish Highlands. Finally, the Music for the Royal Fireworks, composed in 1748, celebrated the end of the War of Austrian Succession. Thanks to his citizenship, Handel became the go-to composer when the English royals required suitably grand music for special occasions.

That music – an amalgam of German technique, Italian lyricism, and English taste – came to define not just the Hanoverian Dynasty but also the English self-image and sensibility to this day.

And that, my friends, is how a German immigrant came to define English musical taste for nearly 300 years.