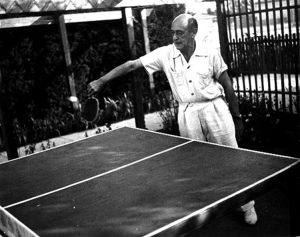 On February 6, 1944 – 73 years ago today – Arnold Schoenberg’s Piano Concerto received its premiere. It was performed by the pianist Eduard Steuermann and the NBC Symphony conducted by Leopold Stokowski.

In his book “Fundamentals of Musical Composition” Schoenberg advised that when working on even the simplest of compositional exercises:

“the student should never fail to keep in mind a special character. A poem, a story, a play or moving picture may provide the stimulus to express definite moods.”

In his Piano Concerto Schoenberg took his own advice; he described its four linked movements with this modest four-line poem:

Life was so easy
[When] suddenly hatred broke out;
A grave situation was created,
But life goes on.

Schoenberg’s quatrain refers to World War Two, which was in its darkest days at the time the concerto was composed in 1942. The concerto is a powerful, lyric, concise, hauntingly beautiful piece.

It is also a product of Arnold Schoenberg’s maturity, written using his own “12-Tone Method”. As such it poses certain aesthetic challenges, all easily overcome if we take the concerto for what it is: a work of Romantic era expressive content, phrase structure, rhythm, and texture, but with a very personal approach to pitch.

Given the fear and loathing the name “Arnold Schoenberg” continues to inspire 66 years after his death you’d think he was some sort of Nosferatu-like monster who shot puppies for sport and refused to recycle. Rather, he was a short (around 5’3”), prematurely bald dude with a baritone voice couched in a soft Viennese accent, someone who loved kids (he was still fathering them into his mid-60’s), Ping-Pong, and tennis (he was, for a period in the late 1930s, George Gershwin’s regular tennis partner), someone who was terrified of the number 13 (a fear known as “Triskaidekaphobia”).

Still: there are few names and/or phrases more likely to terrify your average concertgoer than “Arnold Schoenberg” and the “12-Tone Method”.

Well, it’s time for this madness to stop. Because there has never been – in the whole, magnificent history of Western music – a more talented, more important, more misunderstood and ultimately more underappreciated great composer than Arnold Schoenberg.

So why all the fear and loathing? Because he is blamed – unfairly and inappropriately – for being an unrepentant modernist who single-handedly turned the art of music composition into a dry, meaningless, intellectualized exercise in sonic acrostics.

Let us start our defense of Schoenberg by observing that description does not even remotely jibe with what Schoenberg thought of himself. Au contraire, to his dying day he insisted that he was a traditionalist whose music had, to quote Schoenberg:

“arisen entirely from the traditions of German music. My teachers were primarily Bach and Mozart; secondarily Beethoven, Brahms, and Wagner.”

Most of all, Arnold Schoenberg believed that melody was the primal element of music and that the traditional tonal harmonic system limited and stifled melody by forcing melodies to adhere to harmonies: to chords. Increasingly, Schoenberg came to believe that only by cutting away the underbrush of tonal harmony with its constant fluctuation between tension and rest – dissonance and consonance – could melody be allowed free reign to develop and soar unhindered.

Between 1908 and 1913, he wrote a series of revolutionary masterworks that did away with traditional notions of harmony in favor of pure and constant melodic development and transformation. He called this process “the emancipation of dissonance” though, in fact, it was really the emancipation of melody. By the early 1920s, Schoenberg had codified his compositional process into something he called the “12-Tone Method.” In doing so, he saw himself as a simplifier, a composer who’d gone back to the “root source” of all music: pure melody.

Having said that, the man himself was well aware of how difficult his music was for uninitiated audiences. In 1933, a friend proposed programming a work of his in Barcelona, where Schoenberg had been living for nearly a year. Schoenberg freaked out, writing:

“I have made many friends here who have never heard my works but who play tennis with me. What will they think of me when they hear my horrible dissonances?”

So why did he write such music? Because he believed that someone had to take music to the “next level” and fate had decreed that person to be Schoenberg himself. He wrote:

“I am a conservative who was forced to become a radical! Once, in the army [Schoenberg served two tours in the Austrian army during World War I] I was asked if I was the composer Arnold Schoenberg. ‘Somebody had to be’, I said, ‘and nobody else wanted to be, so I took it on myself.’”

I, for one, am grateful he did.