Music History Monday: The Best Gig in the World! 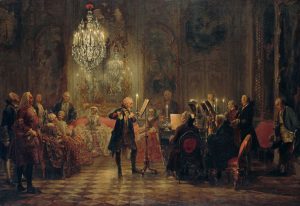 Frederick the Great playing a flute concerto in his palace in Sanssouci. C. P. E. Bach is at the piano and J. J. Quantz is leaning against the wall on the far right.

We wish a spirited and in all ways happy birthday to the composer and flutist Johann Joachim (J. J.) Quantz, who was born in Oberscheden, Hanover (in what today is central Germany) on January 30, 1697, 320 years ago today.

(“You say flutist, and I say flautist …” Actually, I say “flutist” because that’s how North Americans denote someone who plays the flute. In English speaking countries outside of North America, the word “flautist” rules. “Flutist” is by far the older term; according to the Oxford English Dictionary, it entered the English language in 1603 having been drawn from the French word flûtiste. It wasn’t until the mid-nineteenth century that the hoity-toits over the pond began using the word flautist, which was drawn from the Italian flautist. And there’s your TMI moment for today!)

You want to talk about breaking a father’s heart? On his deathbed, J.J. Quantz’ blacksmith father begged his 10 year-old son to follow him in the family trade. It didn’t happen, as J.J.’s extraordinary promise as a musician was already apparent.

Quantz was one of those irksome people who could play (and play well) any instrument he picked up, among them the violin, trumpet, and harpsichord. But it was as an oboist that he began his career: in 1718, at the age of 21, he was appointed oboist to the court of Augustus II, King of Poland and Elector of Saxony.

Six years later – in 1724 – the 27 year-old Quantz looked around and did not like what he saw: there were just too many good oboists active, and his chances for advancement were next to nil. So he did what any musical polymath would do under like circumstances: he switched instruments and took up the flute.

Quantz chose wisely. We don’t know what sort of oboe player he was, but we do know that within a few years he was considered one of the greatest flute players in all of Europe.

In 1728, the 31 year-old Quantz performed in Berlin, and among those in the audience was the 16 year-old crown prince of Prussia, Frederick II. The crown prince was so knocked out by what he heard that he immediately arranged to take flute lessons from Quantz, despite the fact that his father – King Frederick Wilhelm I – did not consider the flute a properly “manly” pursuit for a Prussian crown prince. (Perhaps King Frederick Wilhelm I would have preferred his son take up pillaging neighboring states? Hunting down and killing defenseless wild animals? Deflowering peasant virgins on their wedding day?) In the end it was yet another case of a father’s wishes being ignored: the 16 year-old crown prince began taking flute lessons from Quantz and continued doing so for 13 years, during which the two bonded like chewing gum and the sole of your loafers. When Crown Prince Frederick became the King of Prussia in 1740, Quantz received an offer no one could refuse. Come to Sanssouci – the royal residence in Potsdam, just outside Berlin – and become court composer and conductor, and flute and composition teacher to the king. In return, Quantz would take orders only from the king; he would not have to play in the court orchestra; he would receive a salary of 2000 thalers a year and generous bonuses for each new work he composed.

Beyond sweet. It was a job for life: Quantz moved to Potsdam in December of 1741 and remained there until his death 32 years later, in 1773.

And what a boss! Hey, they didn’t call King Frederick II “Frederick the GREAT” for nothing. Aside from his extraordinary accomplishments as a soldier and statesman, he was a music freak who was estimated to have participated in more than 10,000 performances during his reign. Quantz composed over 300 flute concerti for performance by himself and Frederick and they remain among the most brilliant works ever written for the instrument.
As we observed just a moment ago, Quantz was not only “Freddy the G’s” flute teacher, but his composition teacher as well. Among the King’s compositions are four concerti for flute, works that the king would have performed himself. They are competent, even elegant works, and they offer up the evidence that had he not been born a crown prince, Frederick might have made a go at a career in music.