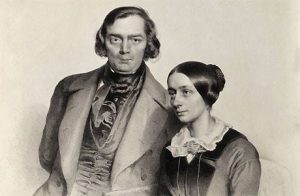 176 years ago today – on September 12, 1840 – one of the most tortuous, profanity-inducing, potentially violent, legally drawn out courtships ended when the composer Robert Schumann and the pianist Clara Wieck were married in Schönefeld, just northeast of Leipzig.

The person to blame for all the tsuris was Friedrich Wieck, Clara’s father. He was a piano teacher who had molded his daughter Clara into one of Europe’s greatest pianists by the time she was a teenager. Clara was Friedrich’s reason-to-be, his creation, a walking advertisement for effectiveness of his “piano method” as well as his Individual Retirement Account. So when that lump Robert Schumann – who had once also been a student of Wieck’s – started sniffing around his Clara when she was just 16 years old (and Schumann was 25), well, it was time to nip things in the bud. There was no way on this good earth that that lame-fingered loser Robert Schumann was going to steal Wieck’s cash cow.

Nip things. In the bud. Yes.

But in this Friedrich Wieck was singularly unsuccessful, though it wasn’t for lack of trying. For five years after Robert and Clara had pledged themselves to each other he did everything in his power to keep them apart. He harassed and spit on Schumann in the streets of Leipzig and threatened to shoot him. He intercepted Clara’s mail and at times kept her like a prisoner in their home. Finally, Robert and Clara had had enough. They sued for the right to be married, and after a seemingly endless series of appeals their suit was granted.

Robert and Clara were married on September 12 of 1840, a date carefully chosen by the lovebirds to give Wieck an acute pain where the sun rarely shines (we’re not referring here to San Francisco’s Richmond or Sunset Districts). You see, the day of the wedding – September 12, 1840 – was the day before Clara’s 21st birthday. On September 13 she would have been legally free to marry anyone she chose. September 12 was the last possible day that Wieck could have been beaten, and Robert and Clara wanted to make sure that he knew that he had been beaten.

Their marriage produced seven children and, in the end, tragedy as Robert succumbed to syphilis (which, thank heavens, he never communicated to Clara). But on September 12, 1840, they were a very happy couple of newlyweds.