For nine wonderful years – from 1992-2001 – I was on the faculty of something called the “Andersen Executive Program”, or “AEP”. Three or four times a summer, various partners from the accounting, auditing, and consulting firm of Arthur Andersen gathered in some extraordinary place for a week to talk about the current issues facing their clients. The teaching faculty – as you’ve surmised, since I was on it – was incredibly diverse.

For three years in the late 1990s the AEP held sessions at a resort hotel called the Huis ter Duin (“House of the Dunes”) on the North Sea in the Dutch town of Noordwijk, 27 miles southwest of Amsterdam. It was at one of those sessions that I had lunch with a fellow faculty member: an Englishman about my age who was a professional “futurist”. He struck me as equal parts high-tech dude, palm reader, and huckster, all of which seemed necessary tool-box skills for someone who made a living predicting future trends and technologies.

When the futurist discovered I was a musician he wanted to talk about one of his pet ideas: how consumers will listen to music in the future. He had it all figured out. Listeners would be immersed in some sort sensory-depriving, sound-enhancing gel. Thus cocooned and cut off from everyone and everything, a listener would (presumably) experience music not just through her ears, but virtually “through the pores of her skin” (or whatnot).

I’m sure I smiled and nodded. There was no reason to be rude or argumentative; he was on my turf and I waited for him to finish before I asked him THE QUESTION: I enquired as to his most memorable musical experience.

He told me about seeing Carlos Santana at London’s Royal Albert Hall when he was sixteen or seventeen years old. I asked him what was so great about it and he told me: the music, the dope, the girls, the crowd, the energy, the energy and the energy. I’m sure I would have said something to the effect that that’s what a live concert is all about: the energy feedback loop between the performers and the audience, each driving the other onward to places they could never go by themselves.

I don’t know if our conversation made a lasting impression, but I know I gave the futurist pause. Because listening in total isolation is not the only or even best way to consume music. The best way is to do it live, in a group. 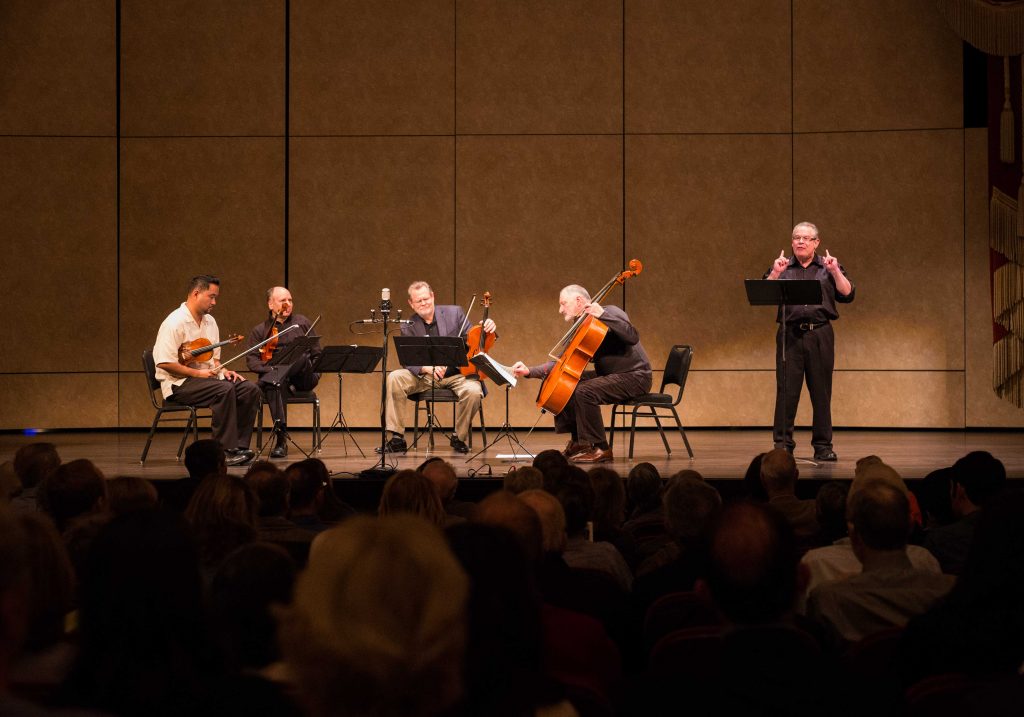 Robert Greenberg and the Alexander String Quartet Live In Concert

We are a tribal species. For a thousand good reasons, from safety to finding a mate, we are wired to be part of a herd. And since the beginning of human time, making and listening to music has been an essential part of our tribal rituals, religions, and cultural identities.

While recordings and videos and YouTube and ear buds have their place, we can never forget that the greatest musical truths, the greatest revelations, the greatest experiences can only be had in a live performance. “Live” as in “living”, because in a live/living performance the audience is an intrinsic part of the performance. Our fellow audience members (annoying though they can sometimes be with their stupid cell phones and throat-lozenge wrappers) magnify the intensity of our own experience rather than diminish it, an intensity that the performers feed off like a lamprey does a trout (gnarly metaphor; apologies).

This is why we still go to the theater, to the opera, and to concerts: because we’re not just watching and listening: we as an audience become an essential and necessary part of the magic. And that’s as true for a concert of the Alexander String Quartet in Herbst Theater as it is for Carlos Santana at the Royal Albert Hall (although, granted, the dope and the girls are in rather shorter supply at Herbst).

The hassle of the schlep and the parking be damned, we must continue to attend concerts. Not incidentally, that’s what San Francisco Performances provides. Buy some tickets! Have a blast, and love the energy.