Welcome to what will become a weekly feature on both my own and the San Francisco Performances Facebook pages, “Music History Monday.” (As titles go that’s about as thrilling as root canal, but it is an accurate description of the feature’s content so run with it we will.) Every Monday I will dredge up some timely, perhaps intriguing and even, if we are lucky, salacious chunk of musical information relevant to that date, or to San Francisco Performances’ concert schedule, or to … whatever. If on (rare) occasion these features appear a tad irreverent, well, that’s okay: we would do well to remember that cultural icons do not create and make music but rather, people do, and people can do and say the darndest things.

September 5 is a particularly rich musical birth date. Among others born on September 5 were Johann Christian Bach (also-known-as the “London Bach”), the youngest son Johann Sebastian, born in Leipzig in 1735; the Berlin-born composer Jacob Liebmann Beer (who renamed himself Giacomo Meyerbeer and made his fortune in Paris composing French-language musical theater extravaganzas, the Andrew Lloyd Weber of his time), in 1791; and the composer, shaman, and arch-provocateur John Cage, who was born in Los Angeles in 1912. 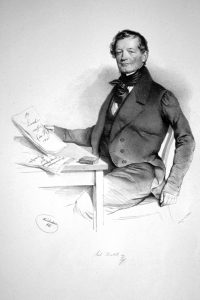 But for us, today, special birthday greetings go out to the composer Anton Diabelli, who was born on September 5, 1781 in Mattsee, just outside of Salzburg. Diabelli started up a music publishing business in Vienna in 1817. Sometime in early 1819 he had a great idea: he sent a waltz of his own composition to 50 composers living in Austria and invited each of them to compose a single variation on the theme. Diabelli’s plan was to publish the set as an anthology entitled “Patriotic Artist’s Club” and distribute the profits to widows and orphans of the Napoleonic Wars.

The curmudgeonly Ludwig van Beethoven was among the composers to receive Diabelli’s theme. Beethoven – 48 years old at the time – tossed the theme aside and dismissed it as a “Schusterfleck”: a “cobbler’s patch”. But then. But then Beethoven realized that although Diabelli’s thematic melody had all the charm of a cold sore, the harmonic structure beneath the theme was rife, ripe, fat with compositional possibilities. Inspired to his very cockles (don’t ask), Beethoven put aside the Solemn Mass on which he was a work and started composing variations. On-and-off Beethoven worked for four years until, in April of 1823, he finished his set of 33 variations, which are today known as the Diabelli Variations.

Anton Diabelli was a generous and honorable man. Thanks to his funky little waltz and Beethoven’s extraordinary set of variations, he has also attained no small bit of immortality. Happy birthday, Herr Diabelli!