The extraordinary Joseph Haydn was born in the Austrian town of Rohrau on March 31, 1732. At the age of eight he moved to Vienna, where he became a chorister at St. Stephens Cathedral. He remained in Vienna, on and off, for the remainder of his long life, dying here on May 31, 1809.

The amazing Ludwig (“my friends call me Louis”) van Beethoven moved to Vienna in November of 1792 a few weeks shy of his 22nd birthday. He remained a resident of the city until his death 34½ years later, dying during an early spring snowstorm on March 26, 1827.

The quintessentially Viennese composer, the “waltz-king” Johann Strauss, Jr. was born just outside of Vienna on October 25, 1825 and died here on June 3, 1899.

The spectacular Johannes Brahms settled in Vienna at the age of 30 in 1863 and remained here until his death 34 years later on April 3, 1897.

The stunning Gustav Mahler studied at the Vienna Conservatory, directed the Vienna Imperial opera for ten years – from 1897 to 1907 – and died here on May 18, 1911.

Magnificent composers all, and all of them rooted – profoundly – in the spirit and zeitgeist of Vienna. And yet, to walk the streets and visit the gift shops of today’s Vienna, there is only one composer who seems to really “count”; one composer whose name and image have been exploited to the point of absurdity, and that is Wolfgang Gottlieb Mozart.

Oh the irony of it all!

Mozart, who was born in Salzburg on January 27, 1756, moved to Vienna in May of 1781 at the age of 25, here to become a freelance composer, performer, and music teacher in what was the hippest, most happening city in the German-speaking world. While his genius as both a performer and composer were apparent to everyone, Mozart’s music – in Vienna, in his lifetime – was never particular “popular”. On the contrary, Mozart’s music was considered by most Viennese (including the Emperor) to be too long, too complex, too “consistently artful” to be enjoyed by any but the most sophisticated listener.

Mozart lived in Vienna for 10 years, from 1781 until his death on December 5 of 1791. The first five years, from 1781 until 1786, mark an upwards trajectory in Mozart’s life and career. The years from 1786 to 1791 marked the crash and burn of Mozart’s life, career, and finances here in Vienna. The speculation remains rife: had Mozart moved to Prague or London, where his popularity was off the charts, would the stress that contributed to his death at 35 have affected him to the degree that it did here in Vienna? We will never know. What we do know (or at least powerfully suspect) is that the indifference of the Viennese musical establishment to Mozart’s music contributed mightily to his premature death.

Which makes the whole modern Viennese Mozart “trip” that much more cynical and ridiculous. You cannot walk half a block without running into a “Mozart store”; a “Mozart café”; a shop selling the ubiquitous chocolate “Mozart balls” (don’t ask); a Mozart “this” and a Mozart “that”. (FYI: there are no such franchised Beethoven shops; no Schubert, Haydn, nor Brahms “balls”; no Schoenberg, Webern, or Berg “cafés”.)

If Mozart could see the degree to which his name and image have been monetized he would first puke and then, bless him, he would insist on receiving a piece of the action. A case in point. Yesterday, I posted a piece describing the Pasqualati House, where Beethoven lived for eight years and where he composed, among other works, his Symphonies Nos. 4, 5, 7, and 8; the opera Fidelio; the Piano Concerto No. 4; the Violin Concerto; the String Quartets Op. 59 and 95. To which we all say together: HOLY CRAP. Admission to the Beethoven Museum at the Pasqualati House costs 4 Euros. There is no “security” at the Pasualiati House; you walk upstairs and you walk into the apartment. As opposed to the flat in which Mozart lived for the 2½ years between September 19, 1784 and April 24, 1787. It was in this flat that Mozart composed The Marriage of Figaro, and it remains the only of Mozart’s thirteen Viennese flats that is intact today. As such, it has been turned into a high-end, modern museum: replete with a cloakroom, an elevator, museum-styled displays, a gift shop, a security detail, metal detectors, an audio tour, crowds of people, and a 10 Euro-per person price tag.

The larger lesson: while we might love Haydn, Beethoven, Schubert, Brahms, Strauss, Schoenberg, Berg and Webern, it is Mozart who SELLS. And “sell” Mozart contemporary Vienna does. And while we’re grateful that Vienna is not selling, say, Kurt Waldheim or Dick Cheney, Mozart’s commercial “deification” still strikes us as being hypocritical at best.

Below: Mozart’s flat at Domgasse 5 with your truly to the right; a Mozart shop; Mozart balls; a Mozart café. 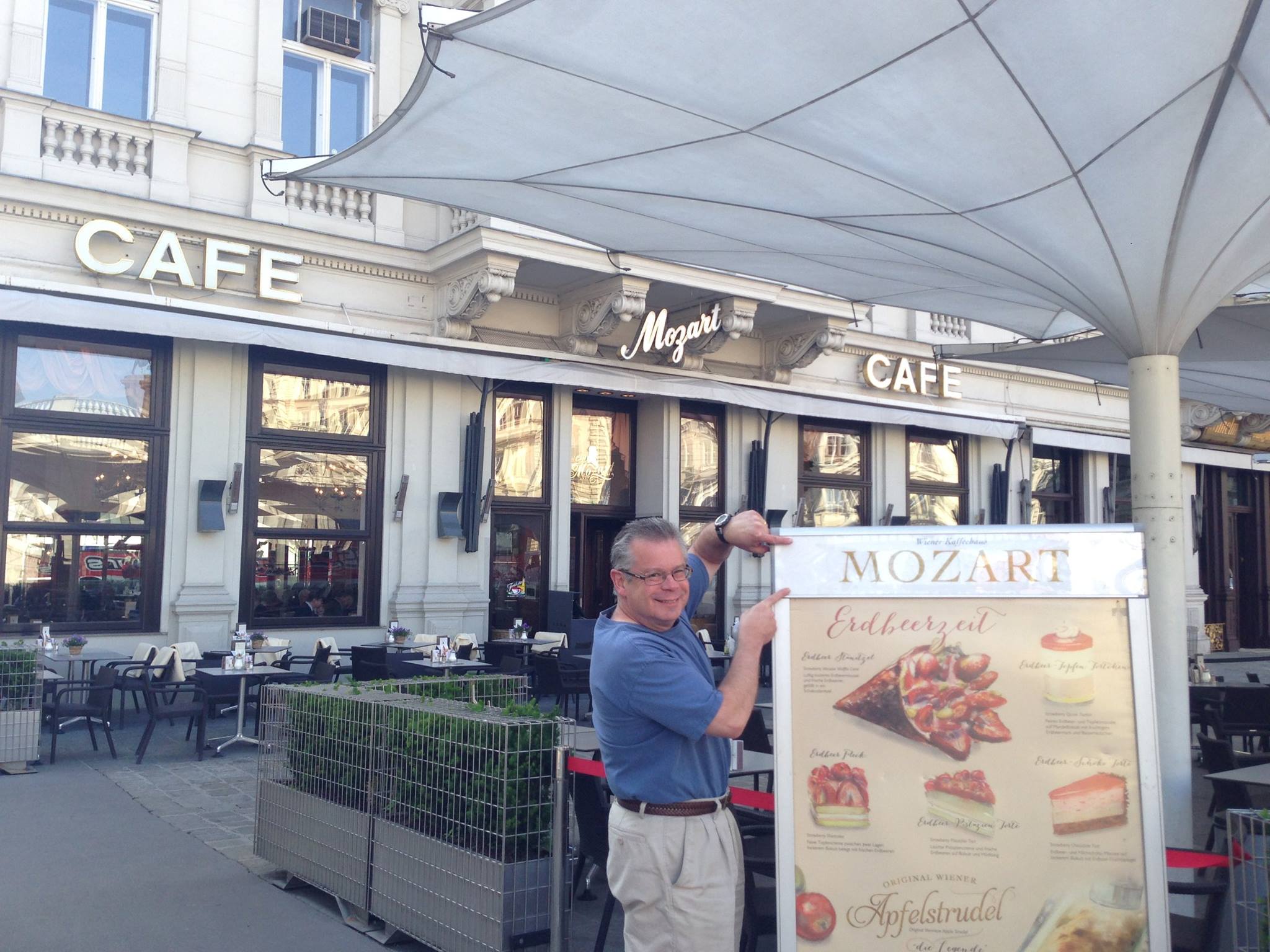 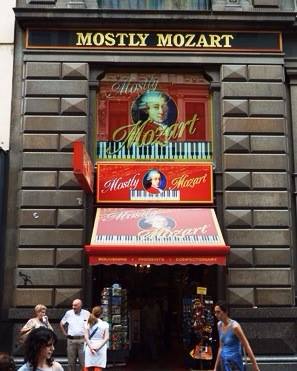 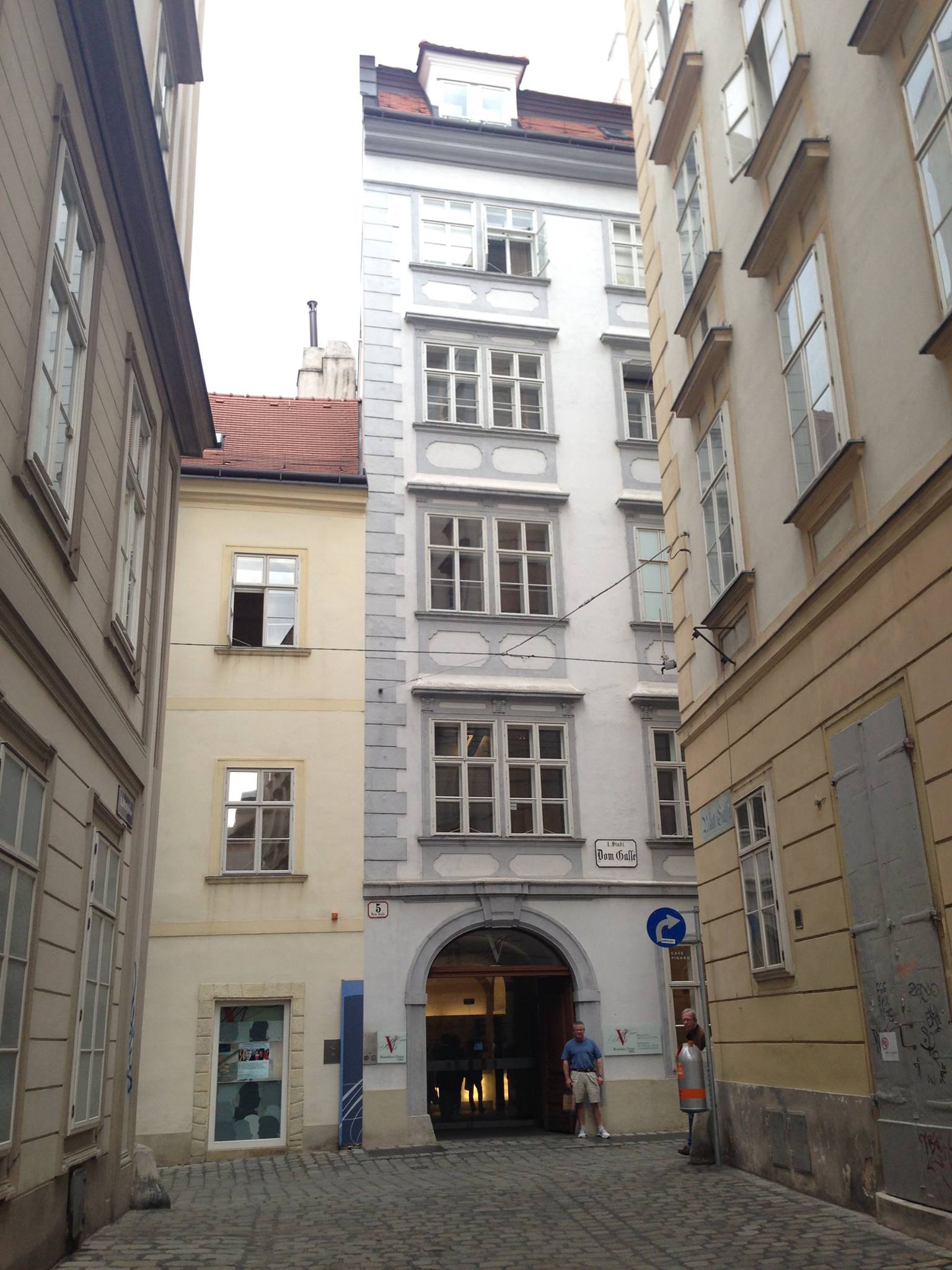 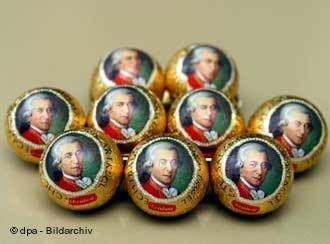