Reporting from Vienna — The Haydn House

Posted by Robert Greenberg on Monday, May 5th, 2014

For my two Euros, the best monument to a composer in Vienna is – by far – the house in which Joseph Haydn lived during the last twelve years of his life, from 1797 to 1809.

Between 1791 and 1795, Joseph Haydn twice visited England. The first of Haydn’s most excellent English adventures took place between January of 1791 and June of 1792, and the second one between January of 1794 and August of 1795. These trips cemented Haydn’s reputation as the world’s most famous and popular living composer and made him – as composers go – a rich man.

It was a one-story house on Kleine Steingasse in the Viennese suburb of Obere Windmūhl. It had been spotted by Haydn’s wife Maria Anna while he was away in London in 1792, and Haydn bought it – from a master weaver named Ignaz Weissgram – in August of 1793.

The Haydns then proceeded to do what wealthy people CAN do when they buy a property: they had the house remodeled completely before they moved in. In the case of the Haydns’ remod, this included the addition of a second floor, which became their living quarters.

Haydn and his wife moved into the house in 1797.

Necessity demands a word about Haydn’s wife; charity begs that we keep it short. In 1760 Joseph Haydn married the 31 year-old Maria Anna Aloysia Apollonia Keller. The 28 year-old Haydn expected his marriage to afford him a loving partner, a peaceful home, and children. He was bitterly disappointed on all three counts. Maria Anna was an ornery, jealous, bigoted, not particularly conscientious housekeeper and a spendthrift. As for children, Haydn remarked: “My wife was unable to bear children, and for this reason I was less indifferent towards the attractions of other women than I might have otherwise been.” But what upset Haydn the most was Maria Anna’s total lack of interest in his music. Outraged, he complained, “she doesn’t care a straw whether her husband is an artist or a cobbler.” According to Haydn’s friends, out of pure malice Anna Maria would use her husband’s handwritten scores as linings for her pastries or for the paper shreds with which she curled her hair.

Now I am as aware as anybody that it takes two people to make a good marriage and two people to make a bad one. However, I’m also aware that we’re talking about Joseph Haydn, who was very simply the nicest, most level-headed, even-keeled major composer to ever hoist a pencil (one of which is pictured below), a man whom everyone loved and a man who loved everyone, with the one unfortunate exception being his wife, who he referred to in his letters as “the infernal beast.”
Back, then, to Haydn’s house. While it is true that he and his wife moved into the house in 1797, it is also true that Haydn kept his distance, spending much time in a rented townhouse in Vienna proper. This all changed in March of 1800 when the Infernal Beast died. From that point Haydn lived in the house as a merry widower until his own death nine years later, on May 31, 1809.

A number of things make the Haydn house special – even unique – among the surviving homes of the great Vienna-based composers. First and foremost, it was Haydn’s own house. He designed it, and his preferences and priorities are apparent in every room. The rooms are of good size. Its feng shui is faultless, as the rooms flow naturally one to the next and are filled with natural light from its many windows. Out back are a courtyard and a large lawn/garden in which Haydn loved to putter. The place just reeks of bourgeois comfort, what the Viennese call “Gemütlichkeit”.

I know it sounds a bit hokey, but Haydn is a palpable presence in the house. Yes, the house is set up as a small museum. But Haydn’s tiny clavichord still occupies a spot in his bedroom where he liked to compose, and his bedroom walls are still decorated with the canons he loved to design and then hang on the wall (see the picture below featuring my wife Nanci standing in the bed chamber next to the clavichord) . Haydn’s grand piano still occupies the living room, along with small everyday objects, like one of his pencils (which he sharpened by hand). The house is bright and cheerful, just like the man himself. During the hour (or so) my wife and I were there, not a single other visitor appeared to interrupt the peace and break the spell. It was an entirely magical, even spiritual visit.
It was in this house that Haydn wrote, among other works, his epic oratorio “The Seasons”. And it was in this house, in the small combination bedroom/composing studio that Haydn died. His last words were “Children, be comforted. I am well.”

Johannes Brahms (1833-1897), bless him, adored and revered Haydn; he owned a number of Haydn’s manuscripts and even one of Haydn’s pianos. It is entirely appropriate, then, that one of the rooms in Haydn’s house is dedicated to Brahms. You see, the apartment building in which Brahms lived for the last 26 years of his life at Karlsgasse 4 was demolished in 1907 to make room for a new wing of the Vienna Technical University. Since Brahms’ own home was thus made unavailable for a Brahms museum, a room in Haydn’s house has been dedicated to Brahms instead. The room contains watercolors of Brahms apartment as it appeared when he lived there as well as some of Brahms furniture, including his washstand and table where he kept his cigars and his smoking accessories. But most importantly, the Brahms room contains the mahogany “standing desk” on which he composed (Brahms composed standing up). This priceless, peerless object, on which Brahms composed innumerable masterworks, is just sitting there in the middle of the room, there to be touched, stroked, fondled, smelled, caressed, drooled on and worshipped by anyone so inclined to do so. Perhaps, out of respect, I should have kept my hands off of it, but the chances of that were ZERO; for god’s sake, Brahms composed his Clarinet Quintet on this desk! Thus my full-contact, full-body embrace of the desk as pictured below. My wife used a crow bar to pry me off when it was time to leave. 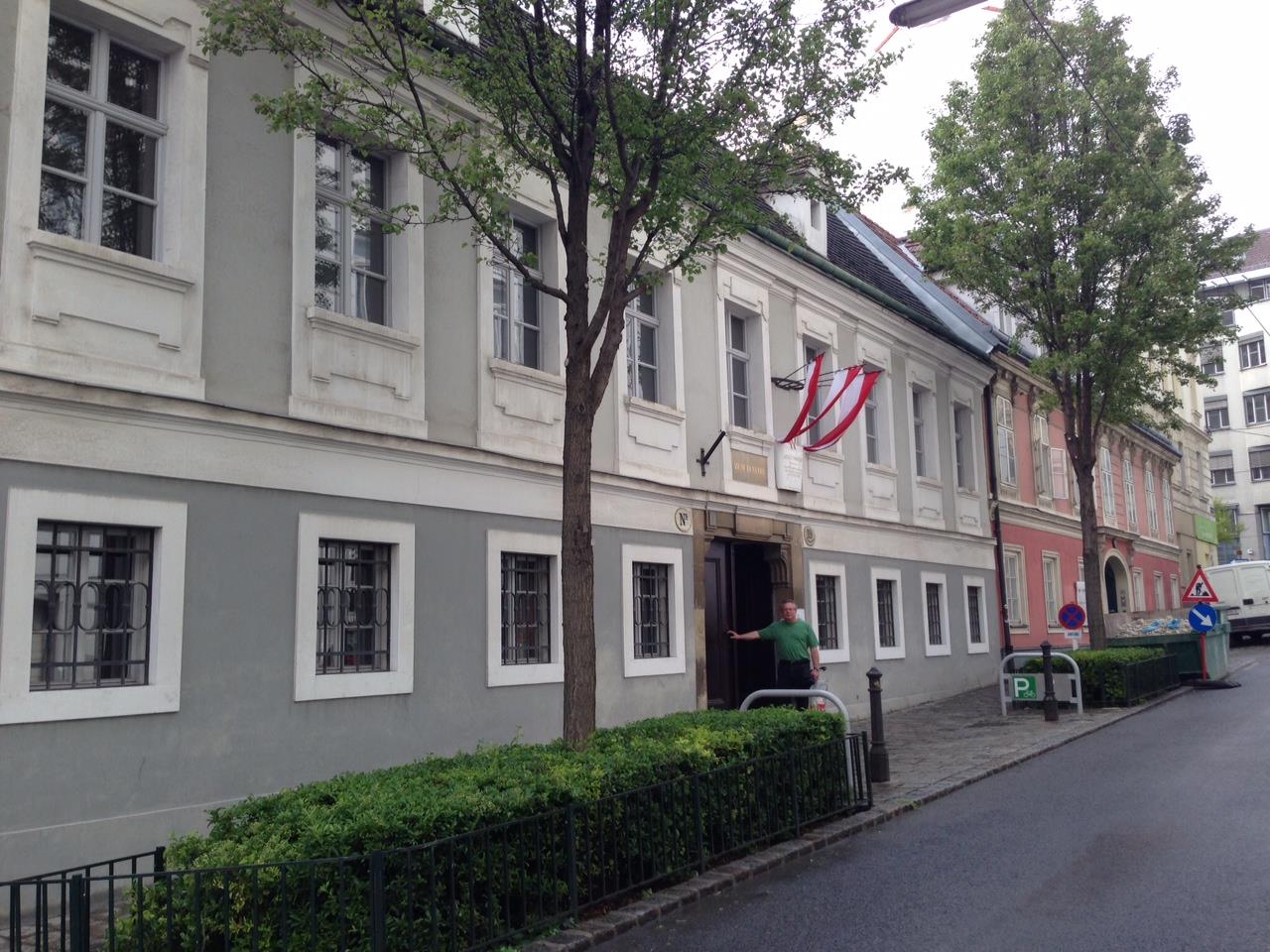 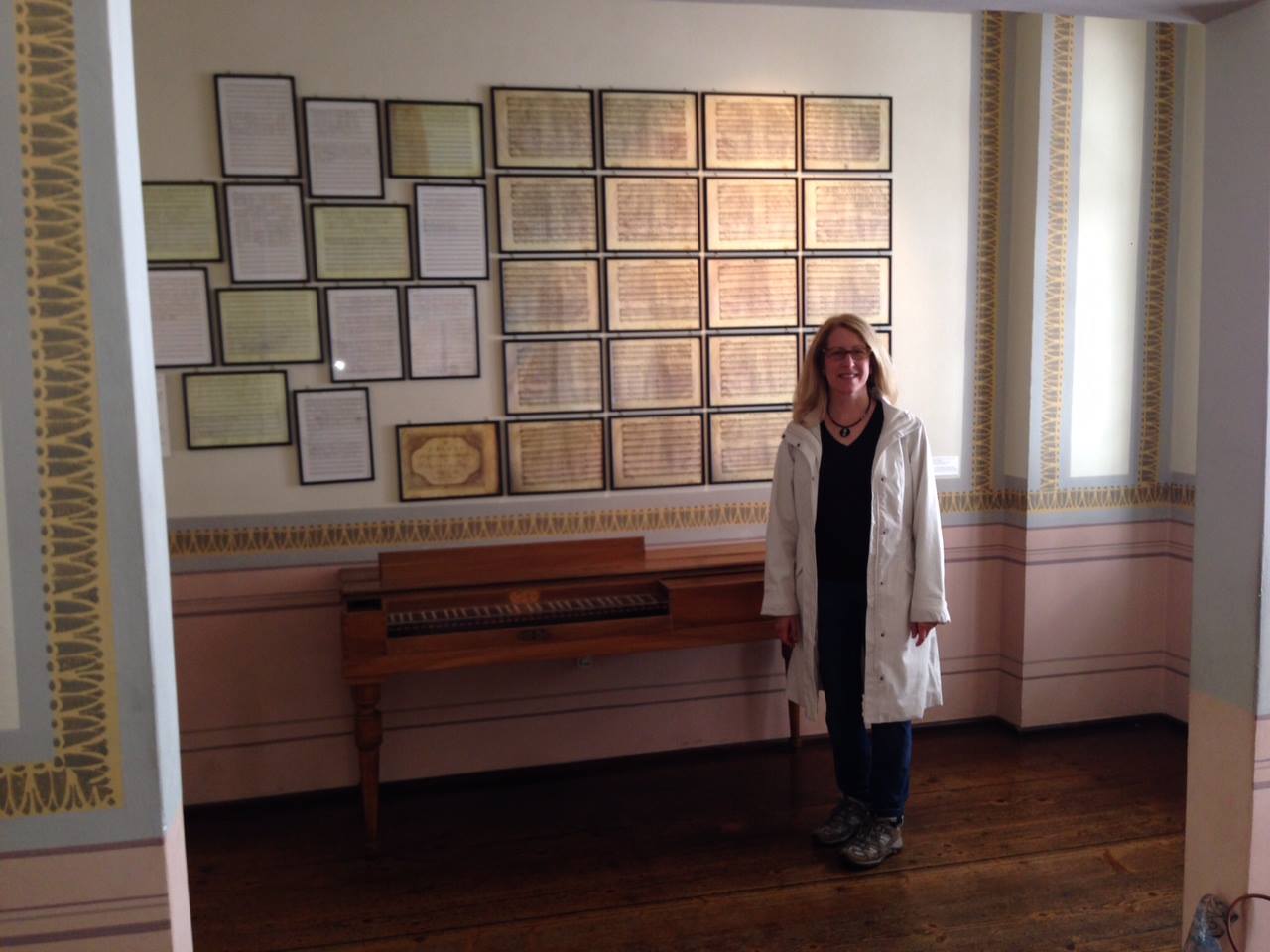 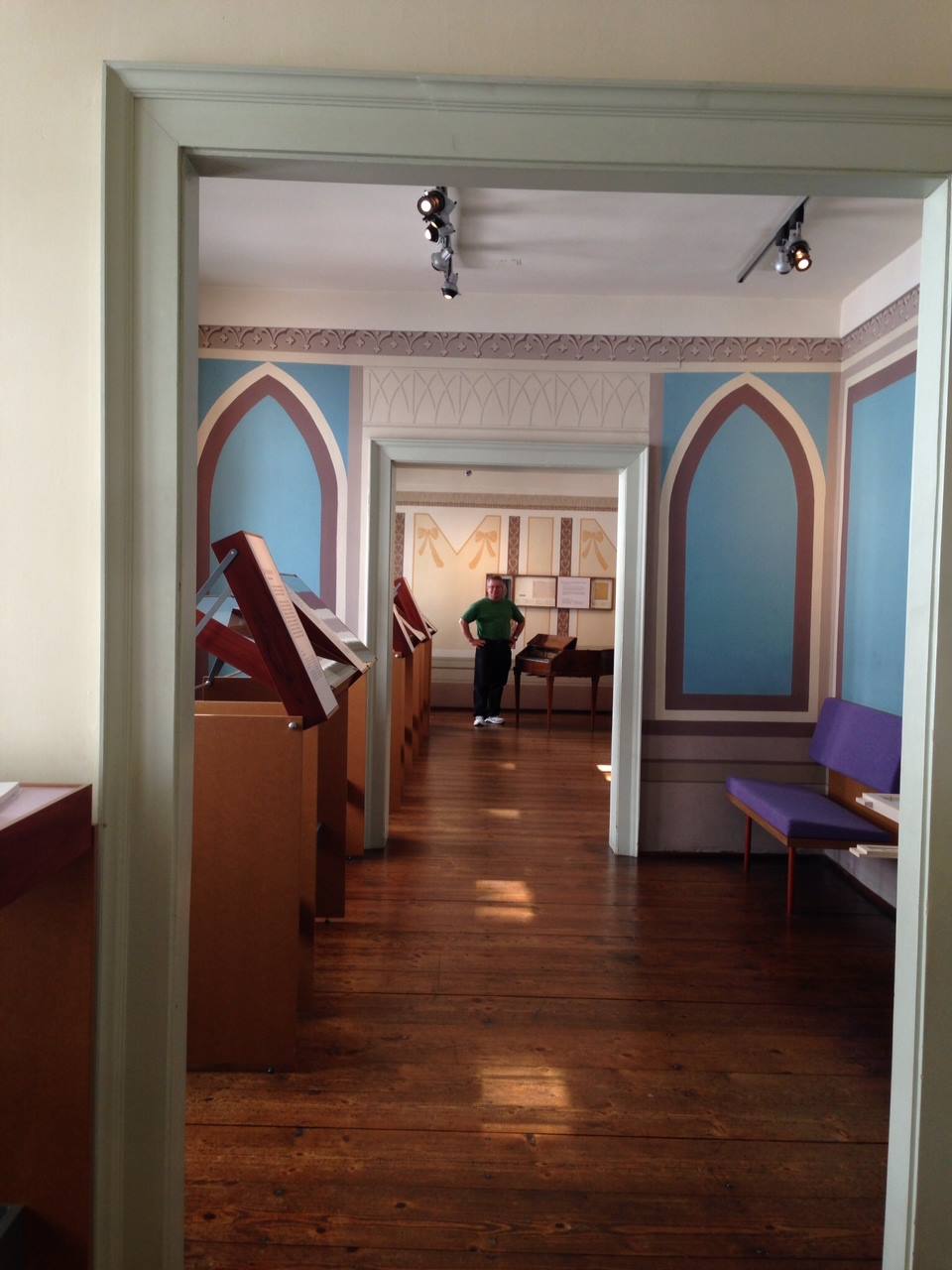 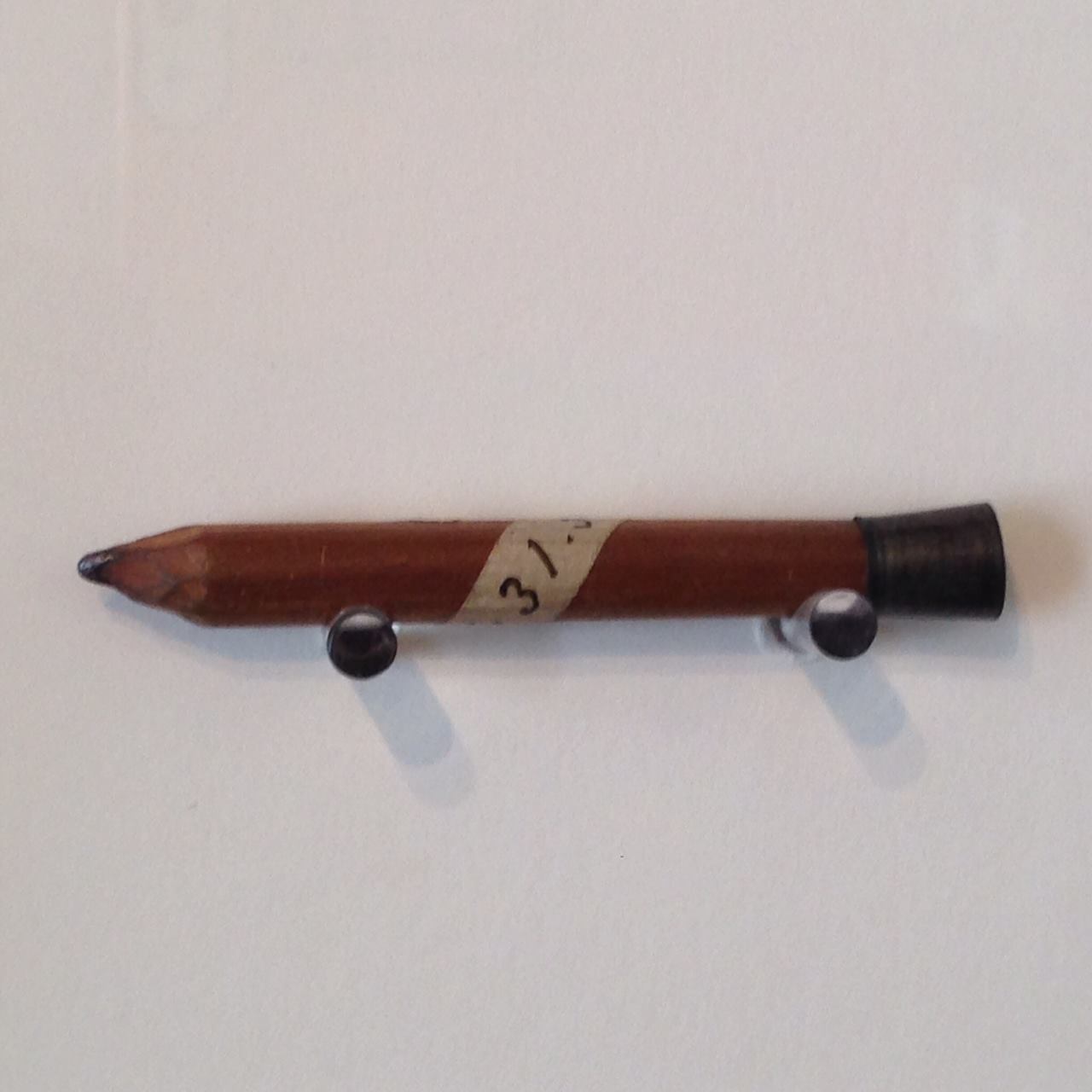 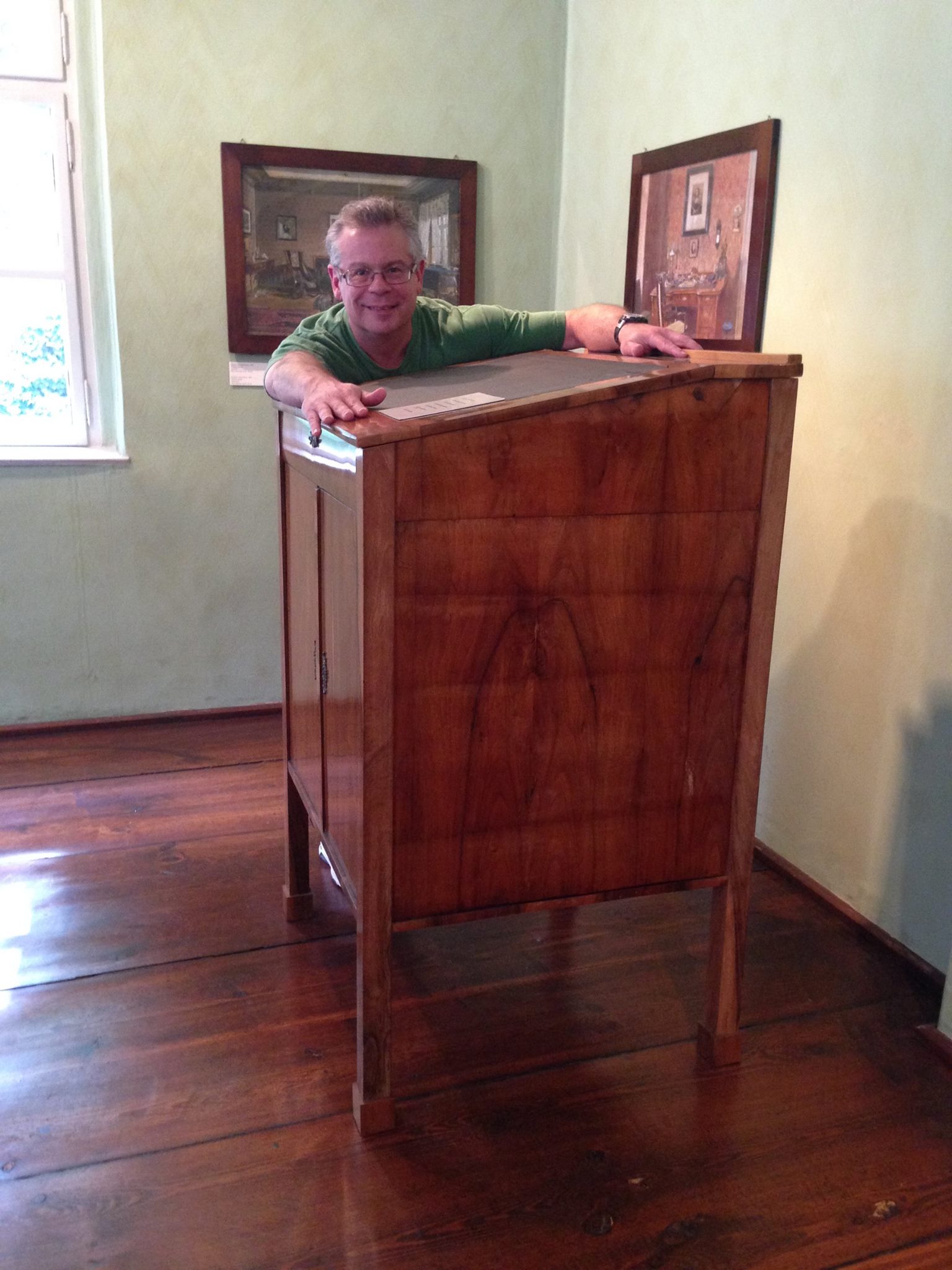 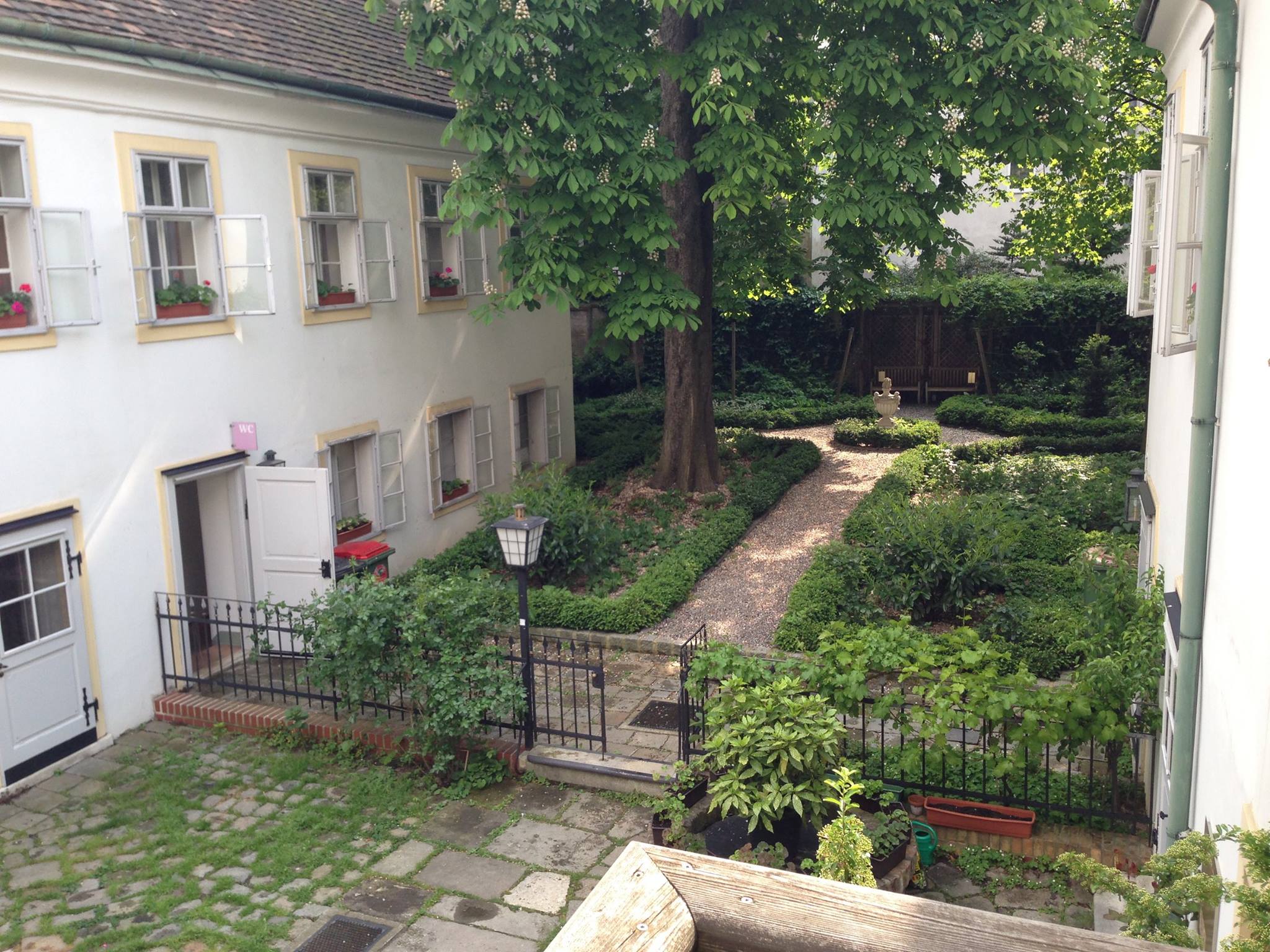