Reporting from Home — Vienna Wrap Up

It’s hard to believe that it’s almost two weeks since we returned from our trip to Vienna, but there you go, time flies when you’re putting things away, doing laundry, and paying bills. I have always advocated – vainly – that we should all have the opportunity to “take a vacation from a vacation” by doing nothing for the first three or four days after returning home, the better to ease ourselves back into real life.

I know: I don’t feel sorry for me either.

Vienna is one of those wonderful places where the longer you stay, the more there is to do. If we didn’t have kids and jobs to come home to, and if my Visa card had not been whimpering and gagging and begging for mercy, we might have tried to stay a few more days. (Yes: Vienna is expensive; very expensive; extremely expensive. I began referring to our trip as our “moneymoon”; as a “paycation.” The price of paradise, I suppose.)

So here’s a rundown on a couple of events that brought our trip to its conclusion.

On our last day in Vienna, I stayed in the hotel room finishing up my previous post on Haydn’s house while my wife Nanci ran down the Kärntner Straße to a department store called Peek & Cloppenburg to exchange a shirt. (Some people have black belts in Jiu-jitsu. Some people have black belts in shopping. My wife has a black belt in “returns and exchanges”.) Excepting potty breaks, it was the first and only time during our nearly two weeks away that we were not together. She returned breathless to inform me of what I had missed. There had been a commotion on the street: people were yelling and running down the Kärntner Straße as they pulled out their cameras and smart phones. Nanci figured it was a movie star, maybe even (as she randomly thought) GEORGE CLOONEY, OMG. So she joined the rush and pulled out her iPhone. As it turned out, it was not George Clooney; it wasn’t even Pia Zadora. It was, however, a beautiful and beautifully formed young woman walking down the street wearing nothing but black high-heels and a smile. My wife claimed that she tried to take a picture for me (sure), but was jostled out of the way by all the men doing likewise (uh-huh). By the time she finally got a picture the Polizei had already nabbed the buff beauty along with her official photographer; Nanci’s picture, alas, shows nothing but a bit of her forearm. (“It was the best I could do.” Riiight.)

This, my friends, was the heavy price I paid for not accompanying her on yet another jaunt to a department store. It is not a mistake I will make again.

About three days before our trip ended, we took what turned out to be our only side trip: we visited Bratislava, the capital city of Slovakia, an hour’s train ride from Vienna. We were sitting side-by-side in one of the rows in which the seats face each other. Five college-age kids got on the train; four girls and one guy. (I know I should have called them “young women” and a “young man”. But they seemed so young, and having turned 60 in April I felt, by comparison so . . . not young.) Anyway, the four girls sat down in the four seats across the aisle and the guy (his name, as it turned out, was Ross) sat down across from Nanci and me. They were chatting in English; as it turned out they were students from St. Lawrence University in upstate New York on a semester abroad. Soon enough we were all talking together. Some 5 or 10 minutes later, while I was talking, one of the girls put her hand over her mouth and started giggling and looked over her sun-glasses at one of the other girls, who looked at me and started giggling as well. While I always assume at such moments that my zipper is flying low, I was sitting down so I suspected that wasn’t the issue. It was at this point that one of the girls said to me “you look, like, really familiar”, at which point another one said, “you sound, like, awfully familiar.” Long story short, their music instructor at the Vienna-American academy – in lieu of actually TEACHING – had, instead, been playing the DVD’s of one of my Great Courses surveys: “The 30 Greatest Orchestral Works”. I was pleased to have been recognized, but a bit put out that there in Vienna, these wonderful kids were getting their music info on a video screen from lectures written in Oakland, California.

On arriving in Bratislava they asked me to pose for a picture with them (“our music teacher is not going to believe who we sat next to on the train”); that picture is below. (We were seriously photo bombed by the dude behind us in the train, who did a passable boogaloo while the picture was being taken.) 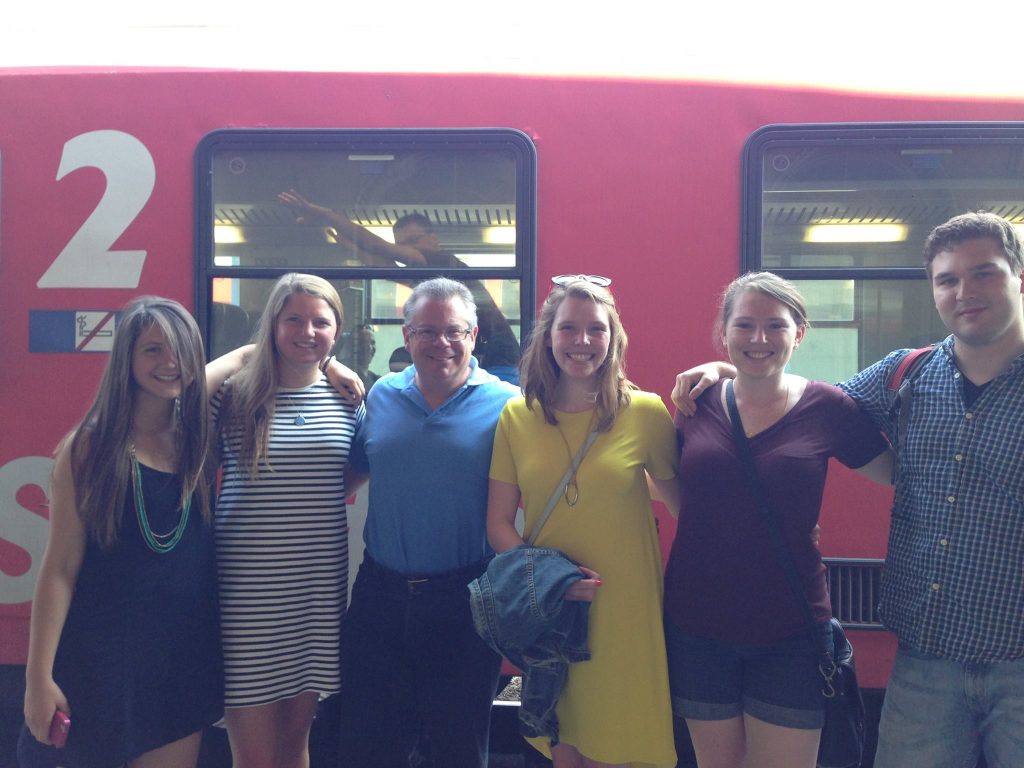