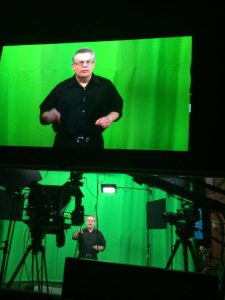 First the good news. Today’s recording session at Ora TV was a portrait in smooth. The crew is slick as snail slime on a bowling alley and incredibly easy to work with. I am working in front of a green screen (see below), which will allow my producer Jason Rovou (who was kind enough to take the pictures below) to superimpose virtually anything behind me. It will be fascinating to see what he comes up with. We have one more day of shooting (tomorrow), and then the episodes will be in the hands of Jason and the production crew.

The bad news: ah, show biz. Larry King ran late today and thus we did not have a chance to record my segment. Boo-hoo for me: all dressed up (in a tie and jacket, no less!) and no place to go. I will return sometime later this spring, before the release of my shows, in order to record the segment. I look forward to it.