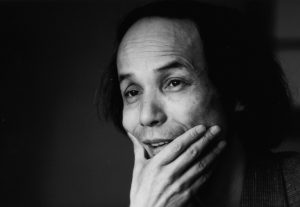 Today we mark and celebrate the birth in Tokyo – 87 years ago yesterday on October 8, 1930 – of one of the greatest composers of the twentieth century: Tōru Takemitsu.

Some historical background called for, as no East Asian country adopted Western music more rapidly and at an earlier date than did Japan.

After more than 200 years of isolation, Japan opened its doors to the outside world with the advent of the Meiji Restoration in 1868. What the “restoration” saw restored was the full Imperial power of the Emperor Meiji following the demise of the Tokugawa Shogunate, the feudal military government that ruled Japan between 1600 and 1868. Having fallen far behind the West during their isolation, the leaders of the restoration – from Emperor Meiji on down – insisted that Japan embark on a crash program of industrial and economic modernization. According to historian Ian Toll:

“Japan’s two generation rise from feudal and pre-industrial origins to the status of a major economic and military power was more than remarkable – it was (and remains) unprecedented in the entire course of human history.”

Japanese education and performing arts were “modernized” as well. According to New Grove Dictionary of Music and Musicians:

“European music was imported with unusual rapidity, in the form first of military band music and Protestant hymns. The government actively encouraged the broad diffusion of Western music, and the new school system (1872) adopted a European style of singing in its curriculum.”

By 1900, Western-styled concerts of Western music – particularly piano music – had become popular. In 1915, the Osaka Conservatory of Music opened its doors, and by 1930 Japan had become a regular stop for such high-end touring musicians as Jascha Heifetz, Sergei Prokofiev, Fritz Kreisler, and the guitarist Andrés Segovia.

Takemitsu was born in Tokyo on October 8, 1930. When he was a month old his family moved to the Chinese port city of Dalian. And that’s where they stayed until 1938; with the Japanese invasion of China in full swing, the family returned to Japan and Takemitsu began his formal schooling.

Japan in 1938 was an almost totally militarized society, one dominated by “Bushido”, “the way of the warrior”, the codified Samurai way of life. By his own admission, Takemitsu’s early aversion to traditional Japanese music stems from these years, when that music was used as a propagandistic tool of the regime and came, in his mind, to represent the war.

In 1944, the fourteen year-old Takemitsu was called up into the military, given a helmet, and sent off to one of the thousands of cave fortresses from which the Japanese intended to defend their homeland from the invasion that never came. Takemitsu later described his war service as having been “extremely bitter”.

“Bitter” is an understatement. Living under martial law, taken away from his family at fourteen, witness to the utter devastation of his country (the firebombing of Takemitsu’s home city of Tokyo on the night of March 9-10 1945 killed many more people – perhaps as many as 150,000 – than the bombings of Hamburg, Dresden, Hiroshima or Nagasaki), and then experiencing the agony of surrender were, for the young Takemitsu, formative experiences, events he blamed on Japanese militancy.

But there was one bright spot, one Takemitsu talked about for the rest of his life. Almost all Western music had been banned in Japan during the war. Nevertheless, a sympathetic officer gathered his bunker-bound child-soldiers around a gramophone and played them some music. Among the records he played was a recording of the French Chanteuse Lucienne Boyer singing Parlez-moi d’amour. Takemitsu later said that he listened in a state of “enormous shock.” Living amid filth and brutality, that French song changed his life: it inspired him and it gave him hope.

In 1946, at the age of sixteen, he decided to “become a composer.” Ah: if ignorance is bliss then Takemitsu must have been most blissful, because when it came to music, his ignorance was almost complete. But that didn’t stop him, and along with Richard Wagner, Takemitsu is probably the greatest self-taught composer to have ever lived.

His first great loves were the music of Claude Debussy and Olivier Messiaen. But in fact, as he developed, there was hardly a mid-twentieth century “ism” that Takemitsu didn’t at least dabble in before moving on. The one musical tradition he continued to avoid like a cold sore was traditional Japanese music that, as he later explained, “always recalled the bitter memories of war.”

That changed, however, in the early 1960s thanks to John Cage. Cage’s shared interest in “silence as plenum rather than vacuum” and Zen philosophy caused Takemitsu to re-examine his attitude towards traditional Japanese music. In an article published in 1989, Takemitsu wrote:

“I must express my deep and sincere gratitude to John Cage. For a long period I struggled to avoid being “Japanese”, to avoid “Japanese” qualities. It was largely through my contact with Cage that I came to recognize the value of my own tradition.”

November Steps of 1967 was a pivotal work for Takemitsu, in which he finally came to grips with the traditional music of his native Japan. As to the title November Steps, Takemitsu offered this explanation:

“It was [premiered] in November, and to me that project represented a new step: thus, I titled the work November Steps.”

The “new step” Takemitsu refers to is the featured role played by two traditional Japanese instruments in the piece: a Biwa (a short-necked lute) and a shakuhachi (a bamboo flute), which play along with a Western orchestra.

The opening minute-and-a-half of the piece is scored for the orchestra alone. It is atmospheric in nature and filled with timbral nuance, as befits its inspiration: the orchestral music of Claude Debussy.

The when the biwa and shakuhachi enter together, they play a very different sort of music, music based on traditional Japanese practice. Here and there the orchestral strings might imitate the sound of the biwa and shakuhachi, but for the most part, the western orchestra and the Japanese biwa and shakuhachi do not share their musical material. As a result, November Steps juxtaposes rather than synthesizes: it is not “about” blending two different traditions but rather, it is about their peaceful and complimentary co-existence. Is an ethereally beautiful work.

“Ethereally beautiful.” It’s a phrase that describes pretty much all of Takemitsu’s music. As but another example of his work I would recommend listening to Takemitsu’s A Flock Descends Into the Pentagonal Garden for orchestra of 1977. For now, it’s not necessary to talk about the pentatonic pitch collections that are the “pentagonal garden” of the title. Just listen to the piece: never will we hear a better melding of the beauty and nuance of Claude Debussy with the grace and “every-gesture-counts” elegance of the Japanese “arts of refinement.”

Happy 87th, maestro. We can only wish you were here to enjoy it with us.