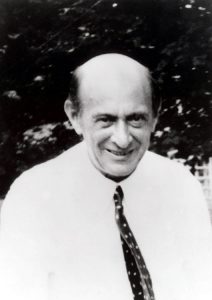 Rarer than unobtainium, a photograph of Schoenberg smiling!

There are certain first performances that we celebrate as being among the seminal events in music history. For example (and we would do well to memorize these dates!), the first performance of Claudio Monteverdi’s groundbreaking opera Orfeo occurred at Florence’s Pitti Palace on Friday, February 24, 1607. Handel’s Messiah was first performed on Tuesday, April 13, 1742 at Great Music Hall in Fishamble Street in Dublin; the performance began at 12 noon. Beethoven’s Ninth Symphony received its premiere at Vienna’s Kärntnertor Theater on Friday, May 7, 1824, in a concert that began at 7 PM. Igor Stravinsky’s The Rite of Spring was first performed at Paris’ Théâtre des Champs Elysée on May 29, 1913; the performance began at 8:30 PM.

To this über-impressive list of premieres we must now add that of Arnold Schoenberg’s dazzling, controversial, and in all ways extraordinary Pierrot Lunaire, which received it’s premiere 105 years ago today, on Wednesday, October 16, 1912, at Berlin’s Choralion-saal after having received a mind-blowing forty rehearsals!

Arnold Schoenberg (1874-1951) believed himself to be a compositional traditionalist, and in many ways he was. He believed that the role of the composer was to express himself and the role of music was therefore to express something. He believed in the traditional Germanic vision of music as a moral force and not merely as an entertainment. He believed in the formal structures and compositional genres of the Baroque and Classical eras, from fugue and theme and variations form to dance suites and string quartets. Most of all, he believed that melody was the essence of music and consequently, he was entirely devoted to melodic development.

During the first decade of the twentieth century, what Schoenberg increasing did not believe in was the traditional tonal harmonic system. By 1908, Schoenberg had come to the conclusion that traditional tonality stifled and constrained melody by forcing it to adhere to what he considered to be “artificial” constructs: “chords” built by stacking thirds and “chord progressions” based on movement by perfect fifths. Schoenberg began to perceive his artistic mission as that of a simplifier, no small irony given how difficult his experimental music can be for the uninitiated listener. He came to believe that only by clearing out the dense underbrush of tonal chord progressions and doing away with the distinction between consonance and dissonance could melody be free to develop unchecked, unconstrained, and unimpeded!

Schoenberg called the music he composed between 1908 and 1913 as being his “emancipation of dissonance” music, but I’d prefer to call it his “emancipation of melody” music: music in which melody was allowed to develop freely across the entire chromatic spectrum. This music is often referred to as being “freely atonal”, a phrase that Schoenberg disliked, as should we (there’s nothing “free” about it and the word “atonal” has become so ripe with misconception and condemnation that it should be outlawed!). Schoenberg preferred the word “pantonal”, implying that his music embraced a sort of all-encompassing “ur-tonality”.

Whatever we call it, the jewel in the crown of Schoenberg’s “emancipation of dissonance” period is Pierrot Lunaire. In terms of its impact on the concert music of the twentieth century, Pierrot Lunaire stands second only to Stravinsky’s The Rite of Spring, which Stravinsky completed six months after Schoenberg finished Pierrot. 1912 was, truly, an “annus mirabilis” – a “miraculous year” – for Western concert music.

Pierrot Lunaire is a set of twenty-one songs for female voice and five instrumentalists playing piano, violin doubling on viola, ‘cello, flute doubling on piccolo, and clarinet doubling on bass clarinet. This ensemble has been copied so many times and became so standard during the twentieth century that it has come to be known to as a “Pierrot Ensemble.”

Pierrot Lunaire was commissioned by a Viennese actress named Albertine Zehme (1857-1946), who asked Schoenberg to compose a work she could recite to a musical accompaniment, to be performed at her “high” (or “serious”) cabaret concerts. Schoenberg was thrilled with the commission; he wrote in his diary, “a marvelous idea, quite right for me.”

Schoenberg created a vocal part using a technique drawn from German cabaret music called Sprechstimme or “speech-voice”. Sprechstimme is a sing-songy recitation technique in which the notated pitches are only momentarily touched upon, while the rhythms, dynamics, and phrasing are performed as written. This is perhaps the key to understanding, appreciating, and – yes! – even loving Schoenberg’s Pierrot Lunaire: it is, in fact, a set of extremely sophisticated cabaret songs.

The 21 poems Schoenberg set to music are drawn from a collection published in 1884 entitled Pierrot Lunaire: Rondels bergamasques by the Belgian Symbolist poet Albert Giraud (1860-1939). “Pierrot” is an archetypal character from the Italian commedia dell’Arte: the travelling, improvisational theater troupes that originated in the city of Bergamo (thus “bergamasques” in Giraud’s title) in the fifteenth century. Pierrot himself is a sad, white-faced, lovelorn clown: naive, trusting, and the butt of everyone else’s jokes. Albert Giraud’s “Pierrot Lunaire” – which means “moonstruck Pierrot” – is something more: not just melancholy and “moonstruck” (meaning “in love”) but lunatic as well, a commedia dell’Arte archetype reconstrued as a symbol for the modern, alienated artist.

Pierrot Lunaire is a virtual encyclopedia of Schoenberg’s “emancipation of dissonance” compositional language: a compendium of developmental techniques, word-painting, and polyphonic constructs (including canons, fugues, and even a passacaglia). Traditional as these elements are, the melodic and harmonic aspects of Pierrot are incredibly radical: they exhibit a studied avoidance of traditional tonal structures and tonal centricity. But – and this is something I cannot emphasize too much – Schoenberg’s radicalism in the service of expression, because it is Pierrot Lunaire’s melodic and harmonic language that together create the weird, wonderful, and utterly unworldly expressive environment of the piece, an environment that mirrors, with uncanny precision, the spirit of the poetry!

“I did not know then what I know now, which is that in the three years prior to Pierrot, Schoenberg had written a body of works we now recognize as the epicenter of the development of our musical language. The real wealth of Pierrot – sound and substance, for Pierrot is the solar plexus as well as the mind of early twentieth century music – was beyond me, as it was beyond all of us at that time.”

But it should no longer be beyond us. I’ve provided a link to a superb, supertitled performance by the soprano Kiera Duffy. Watch and listen and fall in love!