October 23 is one of those dates on which virtually nothing of interest has (yet) happened in the world of music. On such days, I typically turn to the day before or the after for my “Music History Monday” topic; and indeed, both October 22nd and 24th are rich in events about which I could write. I would quickly mention two of those events with the understanding that I’m going to dedicate the bulk of this post to the dastardly demise of a long-forgotten composer.

October 22 marked the 206th anniversary of the birth of the Hungarian composer, pianist, conductor, teacher, arranger, organist, philanthropist, author, Franciscan tertiary and showman/shaman/charlatan supreme Ferencz (Franz) Liszt. As that as that liszt (sorry) of accomplishments indicates, Liszt lived about 46 (give-or-take) different lives in his not-quite 75 years. His principal life was that of a pianist; he was the greatest pianist of his time and very possibly the greatest who has yet to live. As a composer he must be credited – along with Frédéric Chopin – with creating the defining software for the brand new hardware that was the metal harped piano which came into existence in the 1820s. Entirely underrated as a composer (I have taught Liszt’s music extensively in my Great Courses surveys), we will discuss Liszt at length at another time.

October 24 marks the 46th anniversary of the death – in 1971 – of the American composer Carl Ruggles. I’ve always had a soft spot for Ruggles’ music, particularly his steely and angular Sun Treader for orchestra of 1931. A self-styled Yankee iconoclast – he was born in Massachusetts in 1876 and he died in Vermont – he was a loud, virulent and unrepentant racist and anti-Semite. Now I’ve known about this for many years – everyone has – but I never really paid much attention to it. I figured that he was just a prickly, cranky, loud-mouthed codger and that I shouldn’t let that get in the way of enjoying his music. Well maybe I’ve gotten over-sensitive in my old age, or maybe I’ve gotten smarter; whatever, I’ve become much more aware of the degree to which our present sins are rooted in those of our past. And thus I can no longer countenance Ruggles or his music. (For those of you who are thinking, “yeah, well, then what about Richard Wagner?” Well, what about him? Wagner grew up in Germany and died in 1883. Yes: he was a jerk, but he was a man of a time and place presumably foreign to us here, today, in the United States. But Ruggles? He was born in the United States, grew up clean and healthy in New England, was never in want, never served in the military, raised a family and died when I was a senior in high school. He was one of us and he’ll get no pass from me.) 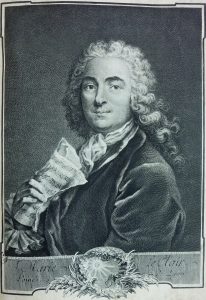 With that off my chest, we turn to the proper subject of todays post, the French composer, violinist, dancer and lacemaker(!) Jean-Marie Leclair, who was born in the French city of Lyon on May 10, 1697 and was murdered in Paris 253 years ago yesterday, on October 22, 1764.

Leclair is credited with being the founder of what today is considered the French violin school. He was one of those people who seems to have excelled in everything he tried; by the time he was 19 he had already been singled out as a master violinist, dancer and – yes – lacemaker.

His career as a dancer and violinist took him across France and Italy. In 1723 – at the age of 26 – he arrived in Paris where his set of 12 violin sonatas was published as his Opus 1. They were exceedingly popular; one contemporary wrote:
“Leclair is the first person who, without imitating anything, created beautiful and new things which he could call his own.”
All together, Leclair published 69 violin sonatas; an opera, six sonatas for two violins, three overtures, three trios, and incidental music for a number of stage productions.

In 1716, the 19 year-old Leclair married a fellow dancer named Marie-Rose Casthanie. Sadly, she died, childless in about 1728. Two years later, he gave marriage another go, when the 33 year-old Leclair married a woman named Louise Roussel. It would seem – at first – to have been both a good marriage and a good partnership: Louise was a professional music engraver, and she engraved all of Leclair’s subsequent publications, beginning with his Op. 2.

Fame came to Leclair in 1733 when King Louis XV of France appointed him ordinaire de la musique du roi. Leclair, in turn, dedicated his third book of violin sonatas to the king, which contains some of his best-known works. From there to the end of his life, Leclair’s career consisted of cultivating wealthy patrons, performing and teaching at high-end courts in France and the Netherlands and accumulating various awards and honorary titles. All told, it was about as high-end a career a musician could have hoped for during the first half of the eighteenth century.

In 1758, the now 61 year-old and semi-retired Jean-Marie Leclair and his wife Louise separated. We don’t know if it was amicable or not; we don’t know if they just grew apart or whether an affair drove them apart. What we do know is that Louise moved into the house of someone named Monsieur Chavagnac, on the extremely tony Rue du Four-Saint-Germain in Paris. Despite an offer to move into the house of his patron, the Duke of Gramont, Leclair chose instead to buy a small house in what was then a very dangerous part of Paris, close to Saint-Martin’s canal.

On the evening of October 22, 1764, Leclair went out to meet some friends. On returning home he was attacked from behind and stabbed three times. He fell directly in front of his door and that was where he was found on the morning of October 23rd, dead and lying in a pool of his own blood.

It didn’t take long for the police to finger three suspects.

The first suspect was Leclair’s gardener – a gent named Jacques Paysant – who had found the body. He was quickly cleared.

Suspect number two was Leclair’s estranged wife Louise. She had a motive: she was in financial straights and Leclair’s death would put her in the money.

But quickly enough, all eyes focused on suspect number three, Leclair’s nephew, Francois-Guillaume Vial: the son of Leclair’s sister Francoise. This Francois-Guillaume Vial fancied himself a great violinist whose career, nevertheless, was moving at a snail’s pace. He was not just jealous of his uncle’s success but believed Leclair to have sabotaged his career. They had fought openly about this and were, at the time of the murder, estranged.

Evidence in the French Archives Nationales clearly points the finger at the nephew. And yet, for reasons we will never know, the case was never brought to trial. The violin might have been Jean-Marie Leclair’s great friend, but the scales of justice were not. C’est dommage.