October 2 was a most interesting day in music history. Rather than choose just one person or event for discussion, we’re going to spread the love today and observe three people and one event for whom/which October 2 was a signal date.

Max Bruch and One Hit Wonders 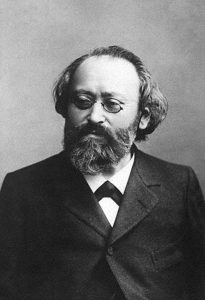 Alas. Of Bruch’s fame in his lifetime almost none remains. And of all those many works, the only one that is still performed with any regularity is his Violin Concerto No. 1 in G Minor, Op. 26, which was completed and premiered in 1866. (The Bruch fans among us – what that they are – might insist on adding to the list of still-performed works Bruch’s Scottish Fantasy for Violin and Orchestra and the Kol Nidre, Op. 47. But that’s reaching, and in this case I am not going to reach.) No, the sorry fact is that Max Karl August Bruch is today considered – along with Johann Pachelbel and Dominique, the Singing Nun – as being one of the greatest one-hit wonders in music history.

(To add some contemporary insult to posthumous injury, we would recall a couple of comments made by Bruch’s pal Johannes Brahms about his music. Brahms had a wickedly nasty sense of humor and Bruch was one of his favorite targets.

For example, Bruch asked Brahms to look over a newly composed oratorio entitled Arminius, which he completed in 1877 and was published as his Op. 43. Brahms did indeed look it over. A few days later, Brahms and Bruch were having dinner together when they heard a hurdy-gurdy be played across the street. “Listen, Bruch!”, Brahms shouted so that everyone could hear, ‘That guy has gotten hold of your Arminius!”

Another time, Bruch played through for Brahms on the piano his oratorio Odysseus, Op. 41 of 1872. Brahms listened patiently, after which all he had to say was: “Say, where do you get your music paper? First rate!” 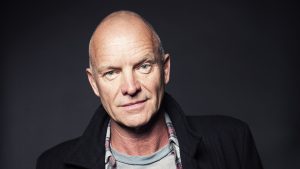 Today we wish a happy 66th birthday to the English singer, songwriter, bassist and actor Gordon Matthew Thomas Sumner, CBE (“Commander of the Order of the British Empire”). He grew up just outside of Newcastle-upon-Tyne on the east coast of northern England. He took up the guitar as a child, but as music didn’t pay the rent, he worked as a bus conductor, a construction worker, a tax officer and, after having attended the Northern County College of Education (today known as Northumbrian University) from 1971 to 1974, he received a teaching credential. He went on to teach for two years at St. Paul’s School in Cramlington, some 9 miles north of Newcastle-upon-Tyne.

His day gigs did not preclude Sumner from playing in bands on nights and weekends, and he became the bassist for a Newcastle-upon-Tyne based New Orleans-style jazz band called the Phoenix Jazzmen. The band was led by its trombonist, a gent named Gordon Solomon. One day Sumner showed up to a gig wearing a black and yellow striped sweater. We’ll let Sumner himself describe what happened:

“One Saturday night, we are playing the Red House Farm Social Club, Sunderland, in the middle of a tough working-class area in the north of the city. The Phoenix Jazzmen will perform at 9pm, after the bingo session. It is the early part of the evening and we are lounging in the dressing room.

Gordon Solomon, or ‘Solly’, the band leader, is going over the set that we will play tonight. He is delivering our nightly pep talk, leaning casually against the bingo machine. ‘Sting, dear boy…’

He’s been calling me that for weeks now. I must have worn the damned sweater but once, and yes it did make me look like a wasp, with its black-and-yellow hoops, but this stupid name is beginning to stick.”

Stick it did. In 1985, when a journalist called him “Gordon” during an interview, Sumner replied:

“My children call me Sting, my mother calls me Sting, who is this Gordon character?”
Happy 66th, Sting.

The Summer of Love and Uncontrolled Substances 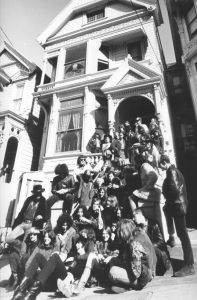 The Grateful Dead and other bands at 710 Ashbury Street on February 2, 1967

This past summer marked the 50th anniversary of the “Summer of Love”, the sustained be-in in 1967 that saw as many as 100,000 hippies/flower children flock to San Francisco, there to “do their thing”. Ground zero was the intersection of Haight and Ashbury Streets in the Haight neighborhood. About 500 feet south of that intersection is a Victorian house at 710 Ashbury Street. Built in 1900, it features four bedrooms, two baths, and has 2680 square feet of space.

Between 1966 and 1968, the house was headquarters and home to The Grateful Dead: Jerry Garcia, Bob Weir, Ron “Pigpen” McKernan, Phil Lesh, Bill Kreutzmann, and Mickey Hart. (When my friends and family come to town, a drive-by of “The Dead House” – as it is locally known – is de regueur, as is a drive-by of the Jefferson Airplane House at 2400 Fulton Street and the house where the movie Mrs. Doubtfire was filmed, at 2640 Steiner Street.)

On October 2, 1967 – 50 years ago today – the San Francisco authorities, fed up with the whole hippie-dippie-dope-flower scene, raided the house during which they found less than a pound of weed in a colander in the kitchen. Two band member were at the house at the time: Bob Weir and Ron “Pigpen” McKernan; they were arrested. According to the San Francisco Chronicle:

“The raid — on The Dead’s way-out 13-room pad at 710 Ashbury street — also led to the arrest of the group’s equipment manager, two business managers and six girls, variously described as ‘friends,’ ‘visitors’ and ‘just girls.’”

The raid made cultural martyrs of them all. No jail time was served – that is, no one went to the joint (sorry) – and the largest fine levied was $200. 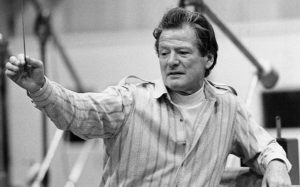 Finally, on October 2, 2017 we mark the first anniversary of the death of the English violinist and conductor Sir Neville Marriner, who died in 2016 at the age of 92.

In 1958, Marriner founded in London an ensemble called the Academy of St. Martin in the Field, named for the Anglican church St. Martin-in-the-Fields, located at the north-east corner of London’s Trafalgar Square. With Marriner as its conductor, the Academy of St Martin in the Fields began recording in 1961. Together, they made over 600 recordings of over 2000 works; staggering numbers. Only Herbert von Karajan conducted more recordings than Neville Marriner.