Music History Monday: One of a Kind 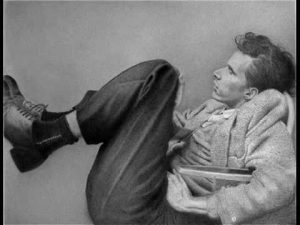 Today we celebrate the birth of the pianist Glenn Herbert Gold. (That is the name on his birth certificate. The family began using the name “Gould” informally, when Glenn was seven years old, but he never formally changed his name to “Gould.”) He was born 85 years ago today – on September 25, 1932 – in Toronto, Ontario in Canada.

Gould’s life and career are easy enough to outline. Born into a well-to-do family, his over-the-top musical precocity was recognized and nurtured by his mother, who was a piano teacher. He entered the Royal Conservatory of Music (today the Toronto Conservatory) at the age of 10; he graduated at 13. He made his debut with the Toronto Symphony Orchestra playing Beethoven’s Piano Concerto No. 4 when he was 13; he played his first major solo recital at 15; and performed his first radio recital on CBC at 18. In 1955, at the age of 23, Gould made his recording debut with CBS, when he recorded Bach’s Goldberg Variations at Columbia’s 30th Street Studio in New York City between June 10 and June 16. The album was released in January, 1956 and it was a sensation: it became Columbia’s best-selling Classical album ever and it launched Gould’s international concert career. (It was a recording that changed my life when I first heard it, and in this I know I’m not alone.)

Gould’s was a dazzling, triumphant concert career but it didn’t last very long. He performed fewer than 200 concerts total before “retiring” from the stage in 1964 at the age of 32, intent on dedicating his musical life to what he claimed was his greatest love, the microphone. Gould spent the remaining 18 years of his life shacked up in a recording studio, recording and then editing his performances. In the process he created an almost unparalleled body of recorded work. He died on October 4, 1982 after suffering a massive stroke. He was just 50 years old.

Reading Gould’s biographies – and there are two superb ones, by Otto Friedrich (Random House, 1989) and Peter Ostwald (Norton, 1997) – we are struck, over and over again, by Gould’s preternatural otherness, his singularity, his loneliness. As a child, his prodigious talent and total immersion in music (along with his budding hypochondria and fear of hurting his fingers; he refused to catch anything thrown to him) alienated him from his classmates, whose roughhousing terrified him.

(Having personally grown up in a house filled with brothers, roughhousing was the name of the game. According to Anthony T. DeBenedet, MD and Lawrence J. Cohen Ph.D., writing in their book The Art of Roughhousing: Good Old-Fashioned Horseplay and Why Every Kid Needs It:

But roughhousing is all about physical contact, which was something that Gould loathed. For example: in 1959, the 27 year-old Gould visited Steinway Hall in New York City. William Hupfer, the chief piano technician, greeted Gould with a collegial slap on the back. Doh. Gould was shocked out of his skivvies at having been touched, and immediately began to complain of pain, fatigue, and a lack of coordination because of the “incident”. He went so far as to contemplate suing Steinway if his “injuries” turned out to be permanent. They were not.)

Gould’s neuroses and fears bordered on the paranoid. From childhood on, he had a morbid fear of germs, which was another reason he shunned physical contact with his fellow human beings. As an adult, he hated shaking hands; he hated crowds and being in any contained space with other people, whether it was a concert hall or an airplane. The sound of a cough or sneeze would send him running for his life. We are reminded here of the elderly Howard Hughes, who spent his last years wasting away in hermetically sealed hotel suites. However, unlike Hughes who was famously pansexual, Gould was considered by most everyone who knew him to be asexual; for many years it was assumed that he had died a virgin. According to his friend, the pianist and harpsichordist Greta Strauss:

“He could not accept love. I had the feeling that any expression of affection would cause him to panic. Well, that’s a sick mind, isn’t it?”

(In fact, Gould did not die a virgin; in 2007 Cornelia Foss – the wife of the conductor and composer Lucas Foss – came forward and admitted to having had a lengthy affair with Gould. She moved to Toronto to be closer to him, and it was there that she witnessed his paranoid outbursts that he was being poisoned and spied on. She described the first such episode in an interview printed on August 25, 2007 in the Toronto Star:

“It [his paranoid fit] lasted several hours, and then I knew he was not just neurotic – there was more to it.”)

Gould constantly complained of being cold, and as such, he cocooned himself in heavy clothing – coat, scarf, hat, and gloves – even in the warmest weather. (His clothing once caused him to be arrested for vagrancy in Sarasota, Florida. He was sitting on a park bench in his full winter garb, and the local gendarmes assumed that he was a tramp.) Written off as an “eccentricity”, Gould’s overabundance of outerwear was yet another way he sealed himself off from the world around him.

Gould could be a brilliant and devastatingly funny conversationalist. Unfortunately, conversations with him usually devolved into lengthy, stream-of-consciousness monologues, during which Gould would purposely make the most outlandish statements. For example, he once said that the problem with Mozart was that he had lived too long; if he had just avoided writing all those operas he’d be considered a great composer! And when he found out that his friend and future biographer Peter Ostwald was writing a biography of Robert Schumann, Gould said:

“Why such an inferior musician? You know very well that I cannot stand Schumann’s music. If it wasn’t for that clever little wife of his who managed to perform all those dreadfully mediocre compositions of his, we wouldn’t know that he ever existed.”

Again, we can write off such comments to eccentricity, but delivered, as they were, during long, opinionated monologues (during which interruption or contradiction were not tolerated), the effect was to distance Gould from not just his listeners but from the mainstream of musical thought altogether.

Taken together, Gould’s seemingly endless phobias and anxieties; his hypochondria and overreliance on both prescription and non-prescription pharmaceuticals; his fear of intimacy and human contact constitute a degree of existential loneliness that is hard to even imagine.

According to Gould biographer (and psychiatrist) Peter Ostwald, who as we have observed was a personal friend of Gould’s (and a friend of mine as well), Gould’s mind fell within the autism spectrum.

Was Gould autistic? Perhaps. And perhaps not. But that does not change the fact that the same genetic predispositions and skillsets that made Glenn Gould one of the greatest and most compelling musicians of all time also made him one of the loneliest people of all time, which tinges his memory with sadness. To no one does the cliché “the loneliness of genius” better apply.