Joining the crazy list of days dedicated to various objects, medical conditions, and foodstuffs (National Slinky Day; National Jock Itch Day; National Hostess Cupcake Day) are a number of days dedicated to music. For example, the International Music Day (IMD), which is celebrated on October 1, was created in 1975 by the violinist and cultural ambassador Yehudi Menuhin. According to its mission statement, the IMD was created to promote musical art among all segments of society and to apply “the UNESCO ideals of peace and friendship between peoples, of the evolution of their cultures, of the exchange of experience and of the mutual appreciation of their aesthetic values.”

Then there is a celebration called the Fête de la Musique, which is also variously known as Music Day, Make Music Day, World Music Day, and in the United States as National Music Day. This “day” – created in 1981 – was the brainchild of the French Minister of Culture Jack Lang. Celebrated on the Summer solstice, June 21, the avowed mission of National Music Day is to “appreciate the many benefits that music making brings to life.” This day is presently celebrated in more than 450 cities in more than 120 countries.

But with all due respect to these very, very nice music days, the one that has caught my ear, rang my chimes, and plucked at my heartstrings is National Azerbaijan Music Day, which is celebrated every year on September 18, which is TODAY! The Wikipedia entry explaining the origin of the day is so wonderfully written that I’m sharing it with you verbatim:

I will translate. The composer Uzeyir bey Abdul Huseyn oglu Hajibeyov is recognized as the godfather of Azerbaijani concert music. He was born on September 18, 1885 (132 years ago today). On the 110th anniversary of his birth – September 18, 1995 – the President of Azerbaijan, Haydar Aliyev, decreed that September 18 would henceforth be National Music Day.

Now I know this is going to come as a surprise (shock?) to many of you, but my knowledge of Azerbaijani music in general and that of Uzeyir Hajibeyov in particular was – um – minimal until I sat down to write this post. But I have become a fan, for reasons I’ll explain in just a moment. But first, a little geography and history. 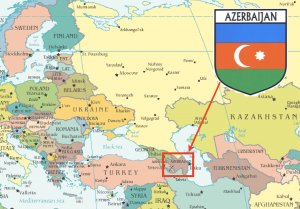 The Republic of Azerbaijan is a country in the Southern Caucasus.

It is bound by the Caspian Sea to the east, Iran to the south, Armenia to the west, Georgia to the northwest, and Russia to the north. Its capitol is Baku. At 33,400 square miles it is a little smaller than the state of Indiana. It has a population of just under 10 million people, of which 98% are Muslim. According to the United Nations Development Report of 2009, the literacy rate in Azerbaijan is an astonishing 99.5%. (By comparison, according to a study conducted in 2014 by the U.S. Department of Education, 32 million adults in the U.S. can’t read: 14% of the population. An additional 21% of adults in the U.S. read below a 5th grade level. Perhaps we in the U.S. of A. should be talking to the Azerbaijanis about how to educate our children.)

With the breakup of the Russian Empire following the Russian Revolution in 1917, the Azerbaijan Democratic Republic declared its independence in 1918, and oh-so-briefly became the first democratic state in the Muslim world. Unfortunately, the newly constituted Russian Soviets invaded in 1920 and incorporated Azerbaijan into their spanking new Soviet Union. (Azerbaijan is oil-rich, and there was no way Vladimir Lenin was going to leave a plum like that sitting just outside his frontiers.) Modern Azerbaijan proclaimed its independence on August 30, 1991, four months before the official breakup of the Soviet Union on December 31, 1991.

The composer, conductor, playwright, teacher, and translator Uzeyir Hajibeyov was born in the city of Shusha, in an area long disputed between Azerbaijan and Armenia. The city was a cultural center, famed in particular for its poets and musicians. Hajibeyov was initially trained as a singer and player of indigenous Azeri folk music. Drawn as well to western music, he learned to play the violin, the ‘cello and a number of Western brass instruments.

It was Hajibeyov’s ability to merge traditional Azerbaijani music with Western instruments and compositional techniques that made him the bedrock founder of Azerbaijani concert music. His career was a series of “firsts” and extraordinary accomplishments; he was the first composer in the Islamic world to write an opera (he eventually composed 10 stage works); he was instrumental (pun intended) in founding the Azerbaijan State Conservatoire (now the Baku Academy of Music) in 1920, Azerbaijan’s first and still pre-eminent school of music, an institution devoted to synthesizing Eastern and Western musical traditions; in 1931 he established the Azeri Folk Instruments Orchestra, which performed Western concert music on indigenous instruments. The list of his accomplishments goes on; I shall not.

What is of greatest importance is his music, which is a delight. It is tonal, infused with energy and a folk sensibility but extremely refined and well written. You don’t have to take my word for it, as there are samples galore on YouTube.

Let us all add the National Music Day of Azerbaijan to our calendars, and the music of Uzeyir Hajibeyov to our playlists!