Music History Monday: “The Song of the Earth” 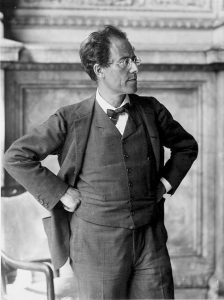 106 years ago today – on November 20, 1911 – Gustav Mahler’s magnificent Das Lied von der Erde (“The Song of the Earth”) received its premiere in Munich under the baton of Mahler’s conductorial protégé, Bruno Walter.

The house was packed for the premiere; among the audience were the composers Alban Berg and Anton Webern. Conspicuous by his absence was Gustav Mahler himself, who had died in Vienna at the age of 51, six months before: on May 18, 1911.

Das Lied von der Erde is a symphonic song cycle, consisting of six songs for alto and tenor voice and orchestra. Mahler fully conceived of Das Lied as a “symphony” and had originally intended to call the piece his Symphony No. 9. But having contemplated that Beethoven, Schubert, Bruckner, and Dvorak had all died either during or soon after the composition of their ninth symphonies, he decided not to tempt fate any more than necessary.

Das Lied von der Erde is about loss, grief, memory, disintegration, and, ultimately, transfiguration. It is the most autobiographical work Mahler ever wrote, a work composed in response to three catastrophic events that occurred, back-to-back, in 1907.

Mahler was appointed music director of the Royal Vienna Opera in October of 1897. He was, almost certainly, the greatest opera conductor of his time and very possibly the greatest conductor of his time. Unfortunately, that sort of talent generally comes with a price, and Mahler was indeed a high-strung, argumentative, and egocentric man who insisted that things be done his way.

He fought constantly with management over money. Though a naturally frugal man, Mahler understood that cheap-looking or historically inappropriate sets and old, threadbare costumes, bad lighting, and the like destroyed the delicate visual illusion that opera, by its nature, demands. Mahler also insisted that the stage technicians and stagehands – on whose shoulders rested the success of an opera as well as the safety of the singers – be paid fairly and treated with respect.

Finally, as Mahler’s compositional career finally began to take off he spent more and more time away from the opera and left his conductorial chores to his assistants (which included, by 1901, Bruno Walter).

So despite Mahler’s almost universal critical acclaim as a conductor, hostility towards him built up over time. By 1907, his enemies at the Vienna Opera outnumbered his friends. A series of attacks in the press began on January 1, 1907, when a negative summary of Mahler’s activities was published in the Deutsches Volksblatt. Like sharks smelling blood, the anti-Semitic press zeroed in on their kill and a series of vicious articles appeared in various papers. Attendance at the opera house fell off precipitously and troublemakers began hissing him from the promenade seats behind the orchestra.

By the end of May Mahler had had enough. He resigned and accepted an offer to conduct at the Metropolitan Opera in New York. With cries of protest from his friends and howls of glee from his enemies, Mahler left Vienna. After having lived and worked in one place for 10 years, Gustav Mahler once again became by his own description Ahaseurus, the “Wandering Jew”.

On June 29, 1907, Mahler, his wife Alma and their two young daughters departed for their summerhouse at Maiernigg on Lake Werther. There, things would go from bad to catastrophic.

“On the third day of our holiday the older child [5 year-old Marie] was beginning to show alarming symptoms. It was scarlet fever and diphtheria, and she was doomed. Two weeks of fear – of physical decline – and the danger of suffocation. A terrible, terrible time.

“Mahler loved this child so much that he retreated more and more often into his room, inwardly taking leave of his adored child. During the final night, when the tracheotomy was carried out, Mahler’s servant [Anton] stood outside his door, so that if he were awakened by the noise he could calm him down and bring him back to his bedroom. This terrible night, in which my English nanny and I set up the operating table and put the poor, poor child to sleep. During the operation I ran along the shore [of the lake] screaming loudly, though no one could hear me. At five o’clock in the morning I saw the beautiful child lying with eyes wide open, gasping for breath, and so we suffered another day – until it was over. Mahler ran back and forth weeping and sobbing outside my bedroom door, for I had put her in my bed.

“She was every inch his child. Wonderfully beautiful and defiant, and unapproachable. Black curls, big blue eyes! She was his pride and joy. He wanted to be buried with her, and we complied with his wish.”

Alma fainted when she saw her daughter’s coffin being taken away. Examined by a doctor, she was prescribed a complete rest. Gustav, attempting to make light of the situation, invited the doctor to examine him as well. Alma continues:

“The doctor examined him. Mahler was lying on the sofa. Dr. Blumenthal had knelt down beside him, and said, almost cheerfully (like most doctors when they diagnose a fatal illness): ‘Well, your heart is certainly nothing to be proud of!’ And this diagnosis was the beginning of the end for Mahler.”
As it turned out, Mahler’s had a valvular dysfunction: one (or more) of his heart valves wasn’t snug and leaked a bit. The leakage was minimal; Mahler’s “heart disease” was by no means fatal. But in 1907 his doctors couldn’t make that distinction. So they assumed the worst and turned Mahler into a cardiac invalid.

Mahler coped by burying his head in books. And among the books he re-read was an anthology of Chinese poems translated into German called The Chinese Flute. According to Alma:

“Now, after the loss of his child and the alarming verdict on his heart, exiled from his home, these poems and their infinite melancholy answered to his own. Before [the summer ended] he had sketched out those songs for orchestra that took final shape a year later as Das Lied von der Erde.”

Das Lied is a mirror of both Mahler’s fate and how – spiritually and emotionally – he managed to cope with that fate. It is, to my mind and ear, his greatest work.