Music History Monday: Rossini and the Soul of Wit 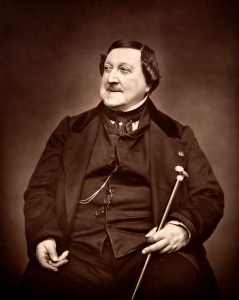 149 years ago today, the opera composer Gioachino Antonio Rossini died in Paris at the age of 76. One of the most famous and respected artists of his time, he remains no less so today. It is my humble opinion that anyone who does not like Rossini’s music is a crank and a humbug, someone averse to melodic brilliance, sparkle, and wit.

In his book Outliers (Little, Brown and Company, 2008), the English-born journalist Malcolm Gladwell formulated his “10,000 hour rule”, which claims that all that’s required to become a world-class practitioner in any field is 10,000 hours of “deliberate practice”.

With all due respect, we can only conclude that Mr. Gladwell has deliberately practiced making absurd statements for well over 10,000 hours, so utterly daft is his “rule.” Listen: when I was twenty, I was (as I remain) 5’7” in height and weighed 165 pounds (I can only wish that that were still the case!). I was strong, fast, and had good hand-eye coordination. I also had a vertical jump of about six inches, so no amount of time and practice was going to make me a high-jump champion or a ballet dancer; no how, no way. The brilliant Spanish pianist Alicia de Laroccha (1923-2009) is said to have learned and memorized – when she was but a child – the twelve pieces that make up Isaac Albéniz’s incredibly virtuosic Iberia in TWELVE DAYS – one piece a day. Again, using myself as an example: I have “deliberately practiced” the piano for many more than 10,000 hours over the span of my life, and there no way on this good earth that I could learn and memorize any one piece from Iberia in under two weeks, if at all.

It is an unfortunate fact that genetic predisposition – meaning talent – counts for almost everything. Yes, talent must be nurtured and “deliberately practiced”, but without it 10,000 hours means bupkis (Yiddish for “goat droppings”).

Among the talents most impossible to learn (along with high-jumping) is wit: “a natural aptitude for using words and ideas in a quick and inventive way to create humor.” (Oxford)

When it comes to being clever/funny, you either have it or you don’t. Speaking for myself, I find few social situations more painful than being with someone who thinks he or she is funny but is, in fact, not. To paraphrase the old line, “’tis better to remain quiet and be thought a witless blockhead than to open one’s mouth and prove it.”

Gioachino Rossini was, bless him, pretty much always the wittiest man in the room. Yes, other composers were famous for their quips as well; the acid-tongued Johannes Brahms was reputed to have left a party by standing at the door and bellowing, “if there’s anyone here I haven’t insulted, I apologize!”; the equally caustic Arnold Schoenberg wrote to a friend, telling him “I hope you weren’t stupid enough to be offended by what I said!” (This has to be one of the greatest lines of all time).

Nevertheless, when it comes to sheer quotability, no composer beats Rossini. Because I must, I would offer up to you some of my favorites “Rossini-isms”, some well-known, others not.

Rossini adored the music of J. S. Bach and Mozart and made no bones about it. About Bach he said:

“If Beethoven is a prodigy of man, Bach is a miracle of God!”

In a letter to the pianist and composer Ignaz Moscheles, Rossini wrote:

“I take Beethoven twice a week, Haydn four times, and Mozart every day. You will tell me that Beethoven is a Colossus who often gives you a dig in the ribs, whilst Mozart is always adorable; it is that the latter had the chance of going very young to Italy, at a time when they still sang well.”

At another time, Rossini opined:

“The Germans have always been the greatest harmonists, and the Italians the greatest melodists. But from the moment that the North produced a Mozart, we of the South were beaten on our own ground, because this man rises above all nations, uniting in himself the charm of Italian melody and all the profundity of German harmony. He is the only musician who had as much knowledge as genius, and as much genius as knowledge.”

About Richard Wagner Rossini was less kind, writing in a letter to Emile Naumann in April 1867:

“Monsieur Wagner has good moments, but awful quarters of an hour.”

At another time, he wrote:

“One can’t judge Wagner’s opera Lohengrin after a first hearing, and I certainly don’t intend to hear it a second time.”

Not addressing any particularly composer directly, Rossini liked to say that:

“Every kind of music is good, except the boring kind.”

Of his own skills as an opera composer Rossini had no self-doubt, famously saying:

“Give me the laundress’ bill and I will set to music even that.”

In an undated letter, Rossini described the appropriate time to compose an opera’s overture:

“Wait until the evening before opening night. Nothing primes inspiration more than necessity, whether it be the presence of a copyist waiting for your work or the prodding of an impresario tearing his hair. In my time, all the impresarios in Italy were bald at thirty.”

Expressing a thought shared by many opera composers, Rossini wrote:

“How wonderful opera would be if there were no singers!”

In an epigraph appended to the score of his Petite Messe Solennelle (“Little Solemn Mass”) of 1863, Rossini wrote:

“Dear God, here it is finished, this poor little Mass. Is this sacred music which I have written or music of the devil? I was born for opera buffa, as you well know. A little science, a little heart, that’s all. Be blessed, then, and admit me to Paradise.”

Rossini had excellent advice to give regarding critics:

“Answer them with silence and indifference. It works better, I assure you, than anger and argument.”

Rossini was one of the great gastronomes of the nineteenth century. Had we the time and space, I could triple the length on this post with anecdotes about Rossini’s taste in wine and food. For now, this story. In 1864, Rossini’s chum James Mayer, Baron de Rothschild sent Rossini a case of grapes from his vineyard. Rossini wrote the Baron and thanked him, gently pointing out that:

“However, I am not accustomed to taking my wine in pill form.”

The Baron took the hint and sent Rossini a barrel of his best Chateau Laffitte.