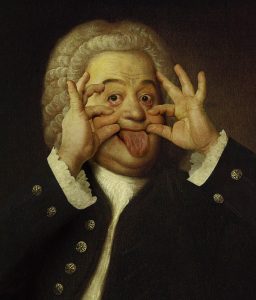 Exactly 300 years ago today – on November 6, 1717 – the great Johann Sebastian Bach was tossed into jail and spent nearly a month cooling his heels courtesy of his boss, Prince Wilhelm Ernst of Weimar. You see, in 1717, a working-class artisan like Bach did not mouth off to the boss. And that was the crime for which an unrepentant Bach served his time.

There are some precious people who so well represent the best of our species that merely mentioning their names makes us nod and smile: Da Vinci and Michelangelo; Shakespeare and Dickens; Newton and Einstein; Lincoln and Churchill; Ruth and Mays; Gandhi, King, and Mandela.

If we were to ask the composers Mozart, Beethoven, Clara and Robert Schumann, Mendelssohn, Brahms, Schoenberg, Stravinsky – and even that nasty French snothead Claude Debussy – whose was the most precious name in the history of musical composition, they all would have said – without a moment’s hesitation – Johann Sebastian Bach.

It’s a sad irony that Bach never felt this love in his lifetime. On the contrary, in his own lifetime – which ran from 1685 to 1750 – his music was considered by most of his contemporaries to be too complicated, too esoteric, too long and increasingly, way too “old-style”. We would consider these criticisms to be humorous if not for the devastation they wrought after Bach’s death, when much of his carefully filed but unpublished music was tossed into a dumpster and lost forever for simple lack of interest.

The man himself lived an unremarkable life. In his various jobs as a keyboard and string player, teacher, and court and church composer he never left his native central Germany. He had two wives (consecutively; not simultaneously!) and fathered 20 children, 10 of whom survived into adulthood and 4 of whom became famous composers in their own right. He was a modest man who attributed his abilities to God and hard work, not talent. But he knew his worth and had quite a temper when provoked. At such moments he would speak his mind – usually at a high volume – to whomever he considered the offending party, whomever that person was. So it was that in November of 1717, Bach’s temper landed him in the slammer.

In 1708, the then 23 year-old Bach was hired as court organist for the city Weimar. Bach worked his way up the musical ladder in Weimar and six years later, in 1714, he was appointed “Konzertmeister”: director of music at Court. As “Konzertmeister” Bach had the opportunity to lead (and compose for) the Weimar court orchestra, which was – at the time – a first-rate ensemble.

But Bach was not the number-one musician in Weimar; he wasn’t even number-two: he was still subordinate to the Kapellmeister and Vice-Kapellmeister, positions held, respectively, by Samuel Drese and his son, Wilhelm Drese.

The elder Drese kicked-the-organ in December of 1716. Based on his talent and accomplishments, Bach should have been promoted to Kapellmeister in his place, but was not. Instead, Drese Junior got the job. It’s hard to know what ticked Bach off more: the fact that he was passed over for promotion or the prospect of remaining subordinate to a guy he neither liked nor respected.

Whatever the case, Bach floated his resume and within a few months was hired to become the Kapellmeister of the state of Anhalt-Cöthen. Bach was formally “installed” – that is, he was supposed to begin his job as Kapellmeister in Anhalt-Cöthen – on August 5, 1717.

Actually no; there was a problem. You see, when Bach informed his boss Wilhelm Ernst, Prince of Weimar that he was resigning he was told “not a chance, Vance”; his resignation is not accepted.

It would seem that our Sebastian Bach had forgotten his place. In 1717, working-class artisans like Bach did not inform their royal masters that they were quitting their jobs. Au contraire: Bach was hired and would be fired at a time chosen by Wilhelm Ernst, Prince of Weimar.

For three months Bach continued to try to resign; for three months he was told, “not happenin’, Sebastian.” And then, in early November of 1717, Bach lost his temper. And while we’re not exactly sure who he mouthed off to – it might have been the Prince himself or it might have been one of his ministers – whomever it was, Bach’s tantrum must have been a doozy, because on November 6, 1717 he was summarily tossed into jail.

Sebastian Bach was, bless him, totally unrepentant. He was allowed pen and paper, so he took advantage of his incarceration to begin work on the first book of his epic keyboard composition, The Well-Tempered Clavier.

By incarcerating Bach, the authorities in Weimar intended to send him a message: persist in your insubordinate effort to quit your job and this is what you’re going to get.  Without a doubt, they figured that after spending a couple of days in the hoosegow, a chastened and cooperative Sebastian Bach would emerge, blinking, into the light, more than ready to go back to his job as “Konzertmeister” of Weimar.

As it turned out, the authorities did not know Bach as well as they thought they did. Two days turned into a week; then another week, then another and another. Bach, who had a wife and six kids sitting at home just a few blocks away, refused to be bullied. In the end it was Wilhelm Ernst, Prince of Weimar who blinked first. Disgusted by Bach’s intransigence, the Prince fired him and then released him from jail on December 2. According to the Weimar court secretary:

“On November 6 [1717], the concertmaster and court organist Bach was arrested and held at the County Magistrate’s house of detention for obstinate behavior and forcing the question of his dismissal. Finally, on December 2, [Bach] was informed by the Court Secretary of his unfavorable discharge and simultaneously freed from arrest.”

Free to go, Bach gathered up his family and headed off to the friendlier environs of Anhalt-Cöthen. On leaving the city limits of Weimar, it doesn’t require much imagination to figure out which finger Bach raised in his farewell salute.