A momentary if gratuitous diversion…

Over the course of the first half of my musical life I played a lot of gigs, both in bands and as a solo piano player. The bands ranged from fairly high end to not fairly high end. The best band I ever played with was led by the alto saxophonist Lee Konitz; the worst was a disco band the name of which will remain my little secret. My first band (a rock & roll garage band) was called “Cold Sun” and the last was a Klezmer group called “Hot Borscht”. (“Cold Sun” and “Hot Borscht”: temperature challenged tags in both cases.)

As a solo player I’ve played pretty much everything, from cocktail parties, weddings, sing-a-longs, awards shows, and receptions to a long-running gig at a long defunct restaurant in Oakland, California called The Pewter House.

One of the occupational hazards of playing the piano in public is the request. Among the most common requests I received in the 1970s were: “hey man, can you play ‘The Sting?’” (meaning Scott Joplin’s classic rag, The Entertainer), Love is Blue, Classical Gas, Brian’s Song, and . . . wait for it . . . “the theme from 2001.”

“The theme from 2001” refers to the opening minute-and-a-half of Richard Strauss’ Thus Spoke Zarathustra, an opening that is heard at the beginning, during, and at the conclusion of Stanley Kubrick’s iconic 1968 film, 2001: A Space Odyssey. Unfortunately, that’s about all most folks know of this sprawling, 60 minute-long work: its first 90 seconds. It is a magnificent piece, though not a particularly easy one to get to know.

(A plug: Lecture 22 of my Great Courses/Teaching Company survey, “The Thirty Greatest Orchestral Works” is dedicated to Thus Spoke Zarathustra.) 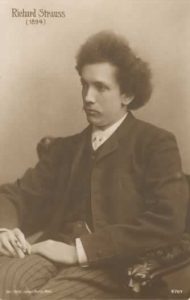 Richard Strauss in 1894, looking a bit like Colin Kaepernick

Strauss’ Thus Spoke Zarathustra is a “symphony about a symphony”: a multi-movement orchestral work about Friedrich Nietzsche’s philosophical-slash-poetic masterwork of the same title. It was Nietzsche himself who wrote:

“Where does [my] Zarathustra really belong? Almost, I think, among the symphonies.”

Nietzsche – who had been trained as a composer and numbered among his professions that of music critic knew precisely what he was saying when he called his Zarathustra a “symphony”. It is in no way a traditional philosophical tract but rather, a super-intense, virtuosic prose poem: a symphony of impassioned words and ideas, one that features just the sort of convoluted, over-heated, semi-philosophical writing produced by Nietzsche’s hero-turned-nemesis, the composer and self-styled “artistic philosopher” Richard Wagner.

Friedrich Nietzsche (1844-1900) was a total brainiac. At the age of 24 he was appointed professor of classical philology at the University of Basel, despite the fact that he yet to complete his Ph.D. or receive his teaching certificate. According to Paul Bishop, writing in his book Nietzsche and Antiquity, Nietzsche was among the youngest tenured classics professors on record.

Unfortunately, Nietzsche does not hold the record for being among the longest tenured classics professors. Plagued by chronic ill-health – migraine headaches, moments of shortsightedness that reportedly left him nearly blind, and what the literature calls “violent indigestion” (be still, our colons) – Nietzsche resigned his tenure at the age of 35 in order to concentrate on writing. These writings – which include Also Spoke Zarathustra – are preoccupied – even obsessed – with the origin and function of “values” in human life. Nietzsche railed against Christianity and famously announced the death of God (who, in the end, had the last laugh by announcing the death of Nietzsche). Nietzsche’s analyses of the basic motives and values that lie beneath Western religion, philosophy and morality have influenced and inspired generations of students, philosophers, psychologists, theologians, and writers, to say nothing of graffiti artists.

Zarathustra – also known as “Zoroaster” – was an ancient Persian prophet who is believed to have been born in 628 B.C.E. in what presently is suburban Teheran. It is impossible, today, to distinguish the teachings of the historical “Zarathustra” from those of the many “Zoroastrian” sects that sprang up over the centuries. As best as we can tell, Zarathustra did preach monotheism in a predominantly polytheistic environment and went on record as opposing human sacrifice (which was, we think, a very good thing to go on record against). 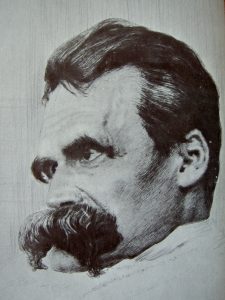 An ill Friedrich Nietzsche looking not so good.

In his “philosophical poem”, Nietzsche uses the historical Zarathustra like a ventriloquist’s dummy to spout his own ideas about the purpose of human life and the fate of humankind. Nietzsche’s Thus Spoke Zarathustra consists of eighty fairly brief discourses (or “sermons”), in which his fictionalized Zarathustra holds forth on a wide variety of subjects: from virtue, criminality, and war to women, priests, and chastity. These discourses are framed by a literary device that sees Zarathustra retreat from humanity to the solitude of his hermit’s cave, emerging periodically to walk among “the people” in order to share what he has learned during his isolation.

From the eighty chapter headings – “sermon titles” if you will – in Nietzsche’s original, Richard Strauss selected eight that most tickled his artistic cockles. Beginning with a prologue (the “theme from 2001”), he arranged the order of those eight sermon titles to serve his artistic end, which he identified as being:

“to convey in music an idea of evolution of the human race from its origin, through the various phases of development to the Übermensch [superman].”

Nietzsche was 52 years old when Strauss conducted the premiere of Thus Spoke Zarathustra on November 27, 1896. Unfortunately, he neither never heard it nor was he aware of it. That’s because on January 3, 1889 Nietzsche had suffered a mental collapse from which he never recovered. The explanations for his madness are many; among them are tertiary syphilis, a brain tumor, mercury poisoning, vascular dementia, and a hereditary stroke disorder called CADASIL. But it is very possible that this already manic-depressive philosopher actually thought himself into madness. After all, this was the man who wrote:

“All superior men who were irresistibly drawn to throw off the yoke of morality and to frame new laws had, if they were not actually mad, no alternative but to make themselves mad.”

For the record: I never honored any request to play “the theme from 2001” but offered, instead, a rather abbreviated version of the information above, for which I never received a tip.