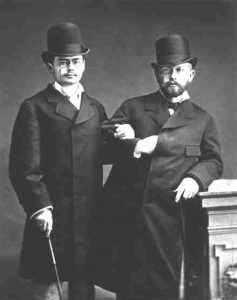 The violinist Josif Kotek (left) and Tchaikovsky (right) in 1877

136 years ago today – on December 4, 1881 – Peter Ilyich Tchaikovsky’s Violin Concerto in D Major received its premiere in Vienna. It was performed by the violinist Adolf Brodsky and the Vienna Philharmonic Orchestra, conducted by Hans Richter.

The concerto is, in my humble opinion, Tchaikovsky’s single greatest work and one of a handful of greatest concerti ever composed.  Yet its premiere there in Vienna elicited one of the most vicious reviews of all time.

Question: do any of us like being criticized? And please, let’s not dignify that oxymoronic phrase, “constructive criticism”. I don’t mean to sound oversensitive, but after a certain age, all criticism – constructive or not – becomes simply infuriating.

Unfortunately for him, Peter Tchaikovsky was both one of the most over-sensitive and over-criticized composers in the history of Western music. (Growing up, his governess called him “a porcelain child” so easily was his spirit chipped and cracked.)

So: criticism. No one likes to be criticized. And no major composer ever received more damning criticism than did Peter Tchaikovsky. Given his incredibly sensitive nature, and the fact that he was, as a homosexual in Tsarist Russia, leading virtually a double life, well, you’ve got a prescription for a most challenging emotional life.

The actual composition of Tchaikovsky’s Violin Concerto went smoothly enough. It was all the drama surrounding its first performance that drove the poor, hysteria-prone dude to despair.

In late February of 1878, Tchaikovsky arrived in Clarens, on Lake Geneva in Switzerland, where he and his “entourage” took up lodging at the Villa Richelieu. Tchaikovsky was on the mend from his epically disastrous marriage to a nymphomaniacal former student of his named Antonina Milyukova. The marriage had lasted less than three months, from July 18 to October 7, 1877, at which time Tchaikovsky had a complete nervous breakdown, attempted suicide, and was spirited out of Moscow by his brothers.

One of Tchaikovsky’s visitors there at Clarens was the violinist Yosif Kotek, a bi-sexual former lover of Tchaikovsky’s. Tchaikovsky and Kotek engaged in all sorts of activities in Clarens, some of them musical, and Tchaikovsky – feeling rejuvenated and inspired – sketched and orchestrated the entire violin concerto in under a month.

Tchaikovsky fully intended to dedicate the concerto to Kotek, but he didn’t because he was terrified of the sort of gossip he believed the dedication would inspire. So instead, he dedicated the concerto to his fellow-Moscow Conservatory faculty member and world famous violinist Leopold Auer. Politically, it was a savvy choice; Tchaikovsky knew that Auer’s great fame and popularity would give the concerto the sort of cache that would insure its success.

Sadly, Tchaikovsky’s best-laid-plan blew up in his face when Auer pronounced the solo part “impossible to play.” A mortified Tchaikovsky wrote in his diary:

“Auer pronounced it impossible to play, and this verdict, coming from such an authority, had the effect of casting this unfortunate child of my imagination into the limbo of hopelessly forgotten things.”

Sheepishly, Tchaikovsky went back to Kotek and offered him the dedication and premiere performance. But Kotek, peeved to the core that Tchaikovsky had approached Auer, not only told Tchaikovsky to make like a tree and leave but also pronounced the piece unplayable (even though he had played through every single note of it while it was being composed).

Truly, hell hath no fury like a violinist spurned.

For the next two-and-a-half years, Tchaikovsky revised and revised-again the solo part until, finally, the Russian violinist Adolf Brodsky consented to perform its premiere. That premiere took place in Vienna on December 4, 1881, at a concert given by the Vienna Philharmonic Society.

The performance went well enough, but the reviews, alas, were savage.

Eduard Hanslick, the most important critic in Vienna, wrote this in Vienna’s New Free Press:

“The Russian composer Tchaikovsky is an inflated [talent], without discrimination or taste. Such is also his long and pretentious Violin Concerto. For a while it moves musically, and not without spirit. But soon vulgarity gains the upper hand. The violin is no longer played; it is pulled, torn, shredded. The [second movement] Adagio is on its best behavior. But it breaks off to make way for a finale that transfers us to the brutal and wretched jollity of a Russian holiday. We see plainly the savage, vulgar faces; we hear curses, we smell vodka. Friedrich Vischer once observed, speaking of obscene pictures, that they stink to the eye. Tchaikovsky’s Violin Concerto gives us for the first time the hideous notion that there can be music that stinks to the ear.”

No “constructive criticism” there; no, that’s about the worst review of all time. Tchaikovsky was so offended by it that he actually memorized Hanslick’s review and was able to recite it, in the original German, to the day he died.

Frankly, it’s hard for us today to fathom how a concerto so beautiful and beautifully written could possibly have elicited such a review. But, thank goodness, there is a happy ending to this story, because critical initial vitriol aside, Tchaikovsky’s Violin Concerto quickly became a pillar of the repertoire, which it remains to this day. And Leopold Auer? Auer soon enough realized how very wrong he was. He apologized to Tchaikovsky, learned the presumably “impossible” violin part, and became one of the concerto’s greatest champions, performing it everywhere and introducing it to his students, among them Mischa Elman and Jascha Heifetz.