Music History Monday: The Show Will Go On! 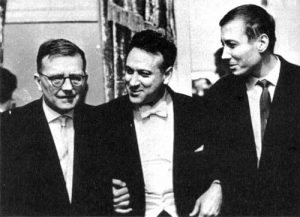 L-R: Dmitri Shostakovich, Kirill Kondrashin, and Yevgeny Yevtushenko after the premiere of Shostakovich’s Symphony No. 13 on December 18, 1962.

On December 18, 1962 – 55 years ago today – Dmitri Shostakovich’s Symphony No. 13 received its premiere in Moscow. It was a premiere that almost didn’t take place, one that did indeed take place even though officially it did not really take place!

Joseph Stalin – the “great leader and teacher” and butcher par excellence – died in March of 1953. He was succeeded as “First Secretary of the Central Committee of the Communist Party of the Soviet Union” by Nikita Khrushchev. In 1956, Khrushchev denounced Stalin as being “savage, half-mad and power-crazed” in his famous “secret speech”. Delivered to the 20th Party Congress in February of 1956, the speech was, in fact, anything but secret.

Khrushchev’s denunciation of Stalin initiated a period called the “Thaw”, during which domestic repression and censorship in the Soviet bloc were scaled back significantly, until Khrushchev’s ouster in 1964. The Thaw reached its climax in 1962 with the publication of Alexander Solzhenitsyn’s One Day in the Life of Ivan Denisovich and the premiere of Dmitri Shostakovich’s Symphony No. 13. Never mind that the Soviet authorities did everything they could to undermine the Symphony’s premiere, and that it was banned outright after it second performance. It was composed, it was heard, and its impact could not be forgotten.

Background: on September 19, 1961 a poem entitled Babi Yar was published. Written by a 28 year-old poet named Yevgeny Yevtushenko, the poem – an outright condemnation of Soviet anti-Semitism – unleashed a firestorm of controversy. Yevtushenko was vilified, ostracized, threatened and spat upon.

Babi Yar is a ravine outside of Kiev where over 100,000 men, women and children, mostly Jews, were slaughtered and dumped by the Nazis. On one day alone – September 29, 1941 – over 30,000 people were killed there. The Soviet government did not “officially recognize” the slaughter as ever having taken place. Yevtushenko’s poem tore away the official Soviet façade and revealed for everyone to see the rampant, societal anti-Semitism behind that façade.

Shostakovich read the poem and was deeply moved. He told an interviewer:
“I was overjoyed when I read Yevtushenko’s Babi Yar; the poem astounded me. It astounded thousands of people. Many had heard about Babi Yar, but it took Yevtushenko’s poem to make them aware of it. They tried to destroy the memory of Babi Yar. But after Yevtushenko’s poem, it became clear that it would never be forgotten. That is the power of art. Art destroys silence.”
So it was that Yevtushenko received a phone call from the great and famous Shostakovich. Yevtushenko recalled:

“The telephone rang. I heard his amazing, inimitable voice. It was slightly hoarse, stuttering, vibrating, jerky.

‘Yevgeny Alexandrovich. Shostakovich here. I’ve read your poem Babi Yar. It’s a remarkable poem. Will you allow me to set it to music?’

I was in seventh heaven. At a difficult moment when I was being attacked from every side, Shostakovich himself was asking my permission to set my poem to music!

I replied, hurriedly, fearing that he might change his mind. ‘Of course, please do.’

He said matter-of-factly: ‘Splendid. Thank God, you don’t mind. The music is ready. Can you come here right away?’

From childhood the name Dmitri Dmitriyevich Shostakovich meant something eternal to me, and I never thought that I would meet him in the flesh. . . . I went to his apartment where for the first time I heard his setting of Babi Yar. It was not a symphony yet. It was quite extraordinary. He sang in a hoarse voice. When he came to the line, ‘It seems to me that I am Anne Frank,’ he wept. I was overwhelmed. He amazed me with his profound rendering of the poem. His music made the poem greater, more meaningful and powerful. In a word, it became a much better poem.”

Shostakovich set four more poems by Yevtushenko, and together, the five settings for bass soloist, men’s chorus, and large orchestra became his Symphony No. 13.

Look, degrees in rocket science are not required to realize that a composition like Babi Yar was not going to meet with the approval of state ideologues, thaw or no thaw. (The Moscow district Party secretary was recorded as having said:
“This is outrageous, we let Shostakovich join the Party, and then he goes and presents us with a symphony about Jews!”)
In the old days, Shostakovich’s 13th would simply have disappeared along with Shostakovich. But Soviet censorship had changed since the death of Stalin; it was well understood that by 1962, the surest way to create a cultural martyr out of the symphony was to ban its performance. So the authorities took a somewhat more subtle approach.

Shostakovich’s choice for the bass-soloist was Boris Gmirya, who initially professed to be “thrilled” to have been chosen to sing the premiere. He then sat on the score for a month before writing Shostakovich that in light of the “dubious” text he could not take part in the performance. Right.

The authorities also got to the conductor Evgeny Mravinsky. Mravinsky – who had premiered almost all of Shostakovich’s orchestral music since the Fifth Symphony in 1937 – also had a sudden change of heart and mind, and likewise refused to premiere the Thirteenth, for which Shostakovich never forgave him.

The premiere of Shostakovich’s Symphony No. 13 was scheduled for the evening of December 18, 1962; the dress rehearsal was scheduled for that same morning. The house was packed for the rehearsal; students from the Conservatory and Party officials were there in conspicuous number. One person who was not there was the new bass soloist, Viktor Nechipailo, who phoned in 15 minutes before the rehearsal was to begin and claimed “indisposition”. Uh-huh. Anticipating just such a possibility, Shostakovich and the conductor, Kirill Kondrashin, had arranged for another singer – named Vitali Gromadsky – to secretly learn the part: a sort of emergency under-study, about whose existence no one else was aware. Gromadsky was brought forward and the rehearsal commenced. After completing the first movement, the conductor Kirill Kondrashin was called to the telephone. Kondrashin tells the story:

“It was Georgi Popov, the Minister of Culture.

‘Kirill Petrovich, how is your health?’

Then a menacing tone was introduced.

‘Is there anything that might prevent you from conducting tonight?’

Then he said, ‘Do you have any political doubts in relation to Babi Yar?’

I answered, ‘No, I don’t have any. I think that it’s very timely and very relevant.’

Silence again. Then he said, ‘Tell me your expert opinion, can the Symphony be performed without the first movement?’

I said, ‘That is entirely out of the question. Everybody already knows that the first movement is a setting of Babi Yar; if we cut it out it will cause a most undesirable reaction.’

Kirill Kondrashin was a brave man. The performance went ahead as scheduled, minus the planned television broadcast. It was a triumphant and very emotional evening for most everyone involved, although you wouldn’t have known it from the reviews, because there weren’t any. But the symphony had been heard, and as Shostakovich observed earlier, “art destroys silence.” Shostakovich’s Symphony No. 13 remains one of the great and acknowledged masterworks of the twentieth century.