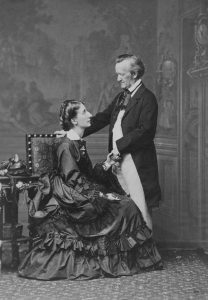 Cosima and Richard. She is seated in order to mask the fact that she was a full head taller than her hubby. Wagner was 5’5” in his lifts, but closer to 5’2” barefoot. In terms of her height, Cosima was her father’s daughter: Franz Liszt stood 6’1” and Cosima about 5’11”.

On Christmas day of 1870 – 147 years ago today – Richard Wagner’s twenty minute-long instrumental tone poem Siegfried Idyll received its premiere under circumstances to be discussed below. Originally scored for a chamber orchestra of 13 players (flute, oboe, two clarinets, bassoon, two horns, trumpet, two violins, viola, cello and bass), Wagner expanded the orchestration to 35 players when the piece was published in 1878.

Let us contemplate, for a moment, what must be considered the second-worst date to be born, second only to February 29 (the birthday of Gioachino Rossini and Dinah Shore but also the serial killers Aileen Wuornos and Richard Ramirez; pretty creepy company). That second-worst birthdate is today: December 25. For someone born into a family that observes Christmas, a Christmas birthday is, frankly, a rip off, as Christmas and birthday get rolled into a single celebration, the whole usually lesser than the parts. As for gifts, well, a December 25th birthday is (or so I’ve been told) is a catastrophe. (How many times have these unfortunate celebrants heard the line, “we decided to give you one big present this year”? Sure. Right.) Among the many good people born on December 25 are Clara Barton, Humphrey Bogart, Jimmy Buffett, Conrad Hilton, Annie Lennox, Sissy Spacek, Kenny Stabler, and Justin Trudeau.

To that august list let us now add Cosima Liszt von Bülow Wagner, who was born late on Christmas eve of 1837 (but always celebrated her birthday on Christmas day) and died 92-plus years later, in April of 1930. The illegitimate child of the great Franz Liszt and his Parisian socialite squeeze Marie d’Agoult, Cosima’s early life reads like a disaster novel by Charles Dickens.

Cosima was born goofy: tall, ungainly, thin as a rail, with an impossibly wide mouth and a nose the size of Sardinia. Her sister Blandine and her brother Daniel called her “the goose”; not kind but not inaccurate, either. But Cosima was smart and talented, and she emerged from a childhood filled with custody battles and harsh, private education a hard, easily cruel and supremely ambitious young woman. She lived a time when a woman’s ambitions were most easily fulfilled through the men in her life, and oh what men did Cosima choose to marry!

Her first husband was her father Franz Liszt’s star student: a brilliant, world-class pianist and conductor named Hans von Bülow. They married in 1857 when Cosima was 19 and Hans was 27.

Von Bülow was deeply committed to the music of Richard Wagner; among many other things, he conducted the premieres of Tristan und Isolde in 1865 and Die Meistersinger von Nürnberg in 1868. Richard Wagner showed his gratitude to von Bülow by becoming deeply committed to von Bülow’s young wife, Cosima, who was 24 years Wagner’s junior. Cosima and Richard began their affair in 1863; they had three children together, and yet von Bülow seems not to have known what was going on until 1868, when Cosima finally walked out. With her kids in tow, she moved into Wagner’s rental house, a chalet called the Villa Tribschen on Lake Lucerne in Switzerland. It was only then that she asked her gob-smacked husband for a divorce, and it was only then that poor Hans von Bülow became fully aware of something that everyone else in Europe seems already to have known: that Cosima and Richard Wagner had been playing him for a sucker for years.

The divorce was granted July 18, 1870 and the lovebirds were married 5 weeks later, in Lucerne Switzerland, on August 25. So come Christmas Day exactly four months later, Cosima and Richard had much to celebrate. And celebrate in style they did.

Cosima was awoken by the sound of music coming from outside her bedroom. Pulling on a robe, she went out into the hall where she, the children, and their house guest – the philosopher Friedrich Nietzsche – were greeted by an astonishing sight: thirteen performing musicians arrayed on the stairs (including the great conductor Hans Richter, who was playing the trumpet) with Richard Wagner conducting. They were playing a piece of music custom-composed by Wagner for the occasion, which he had entitled Triebschen Idyll with Fidi’s birdsong and the orange sunrise, as symphonic birthday greeting. Presented to his Cosima by her Richard, 1870. (“Fidi” was the nickname for Cosima and Richard’s 18 month-old son Siegfried. The “birdsong” and “sunrise” references refer to the sounds and color of the sky that accompanied Siegfried’s birth, early in the morning on June 6, 1869.)

When the piece was published, it was retitled Siegfried Idyll. For many years the story circulated that it had begun its life in 1864 as a string quartet, a work with which Wagner intended to commemorate a blissful stay on Lake Starnberg in Bavaria with his newly-minted mistress, Cosima von Bülow. Whatever his original intention, the string quartet was not composed, but the material Wagner sketched in 1864 did find its was into the third act love duet between Siegfried and Brünnhilde in the music drama Siegfried. It was this music that became the basis of the Siegfried Idyll, which consequently became an instrumental love song based on an operatic love song. As both a holiday and a birthday present we cannot imagine a more wonderful gift.