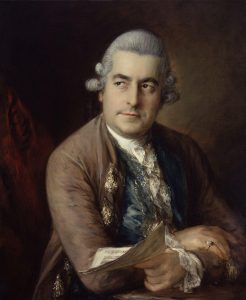 Johann Christian Bach painted in London by Thomas Gainsborough in 1776.

236 years ago today – on January 1, 1782 – Johann Christian Bach died in London at the age of 47. The youngest surviving son of the great Johann Sebastian Bach (who himself had died 32 years before, in 1750), J. C. Bach attained a level of fame and respect in his lifetime that was far beyond anything ever experienced by his old man. In the centuries since, the elder Bach has rightly been recognized as the singular genius that he was. But we will not denigrate the son as we elevate the father, and thus J.C. Bach must be recognized as one of the most important and influential composers of his time.

You want to talk good genes, great genes, crazy-awesome genes, a geneticists dream come true? Let’s talk about the Bach family. From the sixteenth century to the early nineteenth century, the Bach family of Thuringia and Saxony, states in what today is central Germany, produced over eighty professional musicians, from fiddlers and organists to town musicians and court musicians to Kantors and Kapellmeisters, culminating – of course – with Johann Sebastian Bach (1685-1750).

(For our information: entries on the Bach family take up an astonishing 145 pages of volume two of The New Grove Dictionary of Music and Musicians: 15.47% of this 937-page volume! By comparison, the entries for the Mozart family take up a total of 80 pages; for the Beethoven family 68 pages; for “opera” 83 pages; and for “orchestra” 19 pages.)

While the list of other important and distinguished Bach family musicians is a long one, the short list contains four names, all of them sons of Johann Sebastian Bach. The eldest of them was Wilhelm Friedemann Bach (1710-1784), who was known as “Friedemann” to his friends and family. Next was the Carl Phillip Emanuel Bach (1714-1788), also-known-as the “Hamburg Bach” as he spent the bulk of his life and career in that city. Then came Johann Christoph Friedrich Bach (1732-1795), who spent his career at the highly cultured court at Bückeburg in what today is northwestern Germany; he is usually referred to as the “Bückeburg Bach”.

Finally, there was Johann Christian Bach, whose death we are noting and whose life we are celebrating in today’s post. He lived from 1735-1782 and was born when his father Johann Sebastian was already 50 years old. Like his brothers before him, he was groomed to enter the Bach family trade: music. Unlike his brothers – or any Bach family member before him – “Christian” Bach (as he was known to his friends and family) moved to Italy in 1755 at the age of 20 (where he was known as “Giovanni” Bach), there to complete his education.

While living in Italy, Christian/Giovanni Bach converted to Catholicism. By doing so, he left behind the Protestant/Lutheran Kapellmeister tradition that had sustained his family for two hundred years. In its place, he embraced the new “Neapolitan style” then emerging from Naples, a style of music that would evolve into what now is generically called the Classical style; music in which pride-of-place was given to elegant and expressively direct melodies. Thus this youngest of Sebastian Bach’s sons became – by far – the most “modern” of the Bach family composers.

In 1762, the now 27 year-old J.C. Bach traveled to London to supervise the performances of three of his operas at the King’s Theater (where between 1711 and 1739 more than 25 operas by George Frederick Handel had received their premiere). Bach’s timing was propitious: when he arrived in London in 1762, Handel had been dead for just three years and London audiences were desperate for a high-end, German-trained replacement capable of writing operas. J.C. Bach fit the bill perfectly and the rapidity of his rise to fame in England was astounding. Within a year of his arrival, the artist formerly known as “Giovanni” was appointed music master to the Queen Charlotte herself, the wife of George III. The composer now- know-as “John” Bach expressed his gratitude to the queen and his new English patrons by composing a piano concerto movement based on the English national anthem, “God Save the King.”

Christian/Giovanni/John/J.C. Bach was particularly famous in London for his symphonies and his keyboard concerti, works that were tremendously influential in their time time. His symphonies – with their distinctive, highly contrasting themes – bridged the gap between the proto-symphonies of earlier composers and the mature symphonies of Haydn and Mozart. For his concerti, Bach invented a first movement form called Double Exposition Form, a musical form that was employed by composers of concerti through the end of the nineteenth century. J.C. Bach was the first composer to indicate that his keyboard concerti could be played by either a harpsichord or on a fortepiano: the piano, as we know it.

Among the many composers influenced – profoundly influenced – by J.C.’s concerti and symphonies was a child named Wolfgang Mozart, who lived in London for nearly 16 months in 1764 and 1765. Mozart studied with Bach, and as such J.C. became – after Mozart’s father Leopold – his single most important composition teacher. Over the course of their time together, J.C. Bach’s music – in particular his distinctive blending of Italian melodic style with Germanic harmonic craft –

became part of Mozart’s inner ear: music that he imitated as he sought to find his own compositional voice.

The 32 year-old Bach was enchanted by the eight year-old Mozart, and Mozart made it clear – much to his father’s discomfort – that he idolized J.C. According to Mozart’s older sister Nannerl, at a concert on May 19, 1764:

“Herr Bach, music master of the queen, took Wolfgang between his knees. He would improvise a few measures; then Wolfgang would continue. In this manner they played entire sonatas. Unless you saw it with your own eyes, you would swear that just one person was playing.”

If such a thing were to happen today, every member of the audience would be recording it on his or her smart phone!

On April 10, 1782, Wolfgang Mozart wrote his father a terse but heartfelt note:

“I suppose you have heard that the English Bach is dead? What a loss, what a loss to the musical world!”

Mozart was correct. Johann Christian Bach was one of the most important composers of his time, and was almost certainly the young Mozart’s single greatest compositional influence. All told, J.C. Bach’s is a spectacular legacy.