Music History Monday: One of a Kind! 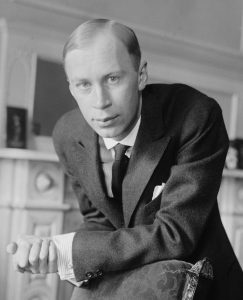 On April 23, 1891 – 127 years ago today – the composer and pianist Sergei Prokofiev was born in the village of Sontsovka, in Ukraine. He was, very simply, one of a kind: a brilliant, tungsten-steel-fingered pianist; a great composer; and one of the most irksome and narcissistic artists ever to ply his trade (no small statement given the character flaws of so many professional artists).

He grew up an isolated, only child on an estate managed by his father. He was homeschooled and rarely played with the local kids, who were considered to be “social inferiors” by his parents, a parental attitude that no doubt helped to foster the overweening arrogance and snobbery that characterized Prokofiev’s personality from the beginning.

A prodigy as both a pianist and composer, in 1904 – at the age of 13 – he entered the St. Petersburg Conservatory.

Prokofiev was not a popular student. He was, by pretty much all surviving accounts, a total jerk. For example, he laughed out loud when his fellow piano students made mistakes and went so far as to actually keep a roster of the mistakes committed by his classmates. (This would have earned him a dislocated jaw where I grew up in South Jersey.)

Nevertheless, by the time he graduated in 1914 – first in his class – Prokofiev was already well on his way to fame. Between 1913 and 1918 he composed a series of outstanding works in an wide range of styles, from his post-Romantic Piano Concerto No. 1 of 1913, to the Fauvist primitivism of the Scythian Suite of 1915, to the Haydn-inspired classicism of his Symphony No. 1 of 1917, to the musically and dramatically strident operas Maddalena (of 1913) and The Gambler (of 1917).

These works were written against the backdrop of World War One. The War began on July 28, 1914, just a couple of months after Prokofiev graduated from the Conservatory. As the only son of a widow, he was not called up into the military, a mercy for which we must be grateful as Russia suffered nearly four million deaths during the war, equal to the combined deaths suffered by France, Great Britain, and Belgium.

In the fall of 1916, he performed his Piano Concerto No. 1 in Kiev. In the audience was a young composer named Vladimir Dukelsky, who later would become one of Prokofiev’s best friends. (Dukelsky immigrated to the United States in 1921 at the age of 18. His friend, the young George Gershwin, suggested he Americanize his name to “Vernon Duke”. This he did, and it was as Vernon Duke that he wrote the music for such classic “American” popular songs as Taking a Chance on Love, I Can’t Get Started, April in Paris, and Autumn in New York [for which he also wrote the words]).

Dukelsky left us with this description of Prokofiev on stage:

He had white-blonde hair, a small head with very thick lips, and very long, awkwardly dangling arms, terminating in a bruiser’s powerful hands. Prokofiev wore dazzlingly elegant tails, a beautifully cut waistcoat, and flashing black pumps. The strangely gauche manner in which he traversed the stage was no indication of what was to follow; after sitting down and adjusting the piano stool with an abrupt jerk, Prokofiev let go with an unrelentingly muscular exhibition of a completely novel kind of piano playing. There was no sentiment, no sweetness – nothing but unrelenting energy and athletic joy. There was frenetic applause. Prokofiev bowed clumsily, dropping his head almost to his knees and recovering with a yank.”

Sadly, current events creamed Prokofiev’s developing career like a bass in a blender. Violent frustration over the Russian war effort led Czar Nicholas II to abdicate on March 2, 1917. An armed insurrection brought Vladimir Lenin’s Bolshevik Party to power in November of 1917, and the Russian Civil War began. The Civil War – which ran for five, horrific years – claimed an additional 9 million Russians and destroyed what was left of the economy. One could argue that it has still yet to recover.

Prokofiev decided to ply his trades in the West until things settled down. He later wrote:

In fact, Prokofiev did not return to Russia for nearly nine years.

In August of 1918 he arrived in the United States, where he was admired by not particularly liked. According to Harold Schonberg:

“He was stubborn, ill-tempered, obstinate, and surly. He had pink skin that would turn red when he was in a rage (which was often). He disturbed everybody: always ready with a crushing repartee, with an irritating chuckle and a celebrated leer.”

According to his friend Nicholas Nabokov, Prokofiev’s rudeness “bordered on sadistic cruelty.”

In 1923 he decamped for Paris, which remained his “home base” until 1936. But alas, as he had in the United States, Prokofiev felt unappreciated in Western Europe. Which goes a long way in explaining the biggest mistake he ever made, one he shared with Napoleon and Hitler: his belief that he could be victorious over Russia and live there in triumph.

The success of these tours convinced Prokofiev to return permanently in 1936 and become a Soviet citizen. The Russian émigré community was aghast. Igor Stravinsky spoke for many when he declared that Prokofiev’s return was:

“a sacrifice to the bitch goddess [of greed] and nothing else. He had no success in the United States or Europe for several seasons, while his visits to Russia had been triumphs. He was politically naïve, he returned to Russia, and when finally he understood his position there, it was too late.”

We can only shake our heads. Did Prokofiev not read the papers? Was he unaware of the collectivization and forced starvations that killed millions of Soviet citizens? Of the show trials and reign of terror that corresponded exactly with his return? Was he unaware of the censure of Dmitri Shostakovich’s opera Lady Macbeth in January of 1936? Did he not understand that the role of music in the Soviet Union was to promote the state and not to gratify the expressive desires of its composers?

Yes, Prokofiev knew about all of this. But somehow he believed that none of it had anything to do with him.

“Prokofiev was an inveterate gambler [who] thought he had calculated perfectly. For some 15 years Prokofiev sat between two stools: in the West he was considered a Soviet and in Russia they welcomed him as a Western guest. And [then] Prokofiev decided that it would be more profitable for him to move to the U.S.S.R. Such a step would only raise his stock in the West, because things Soviet were becoming fashionable; they would stop considering him a foreigner in the U.S.S.R., and therefore he would win all around. And this is where Prokofiev landed like a chicken in soup. He came to Moscow to teach them, and they started teaching him.”

Shostakovich’s was right, and by the time Prokofiev realized that he had been beheaded, gutted, plucked and tossed into the soup, it was far too late for him to remove himself.

He died a broken man on March 5, 1953, aged 61 years, just about one hour before Joseph Stalin died. In the April, 1953 issue of Sovietskaya Muzyka – “Soviet Music”, the official publication of the “Union of Soviet Composers” – Prokofiev’s death was reported in a blurb on page 117. The first 116 pages were devoted entirely to the death of Stalin.

We can only hope that at some astral plane, Prokofiev’s 127th birthday is giving him some degree of pleasure.