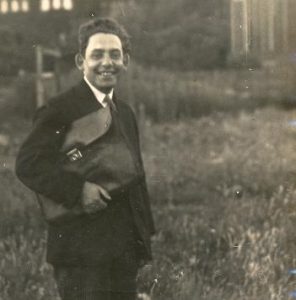 As regular readers of this blog are aware, while I opine (and even bloviate) with fair regularity, I rarely get personal in my posts: Music History Monday is about events and people in music history, and is not intended as a platform for my own life and issues.

But today is a bit of an exception, for which I will be forgiven.

The degree to which musicians identify with their primary instruments is primal; it’s something that non-musicians have probably never really thought about. A professional musician has, in all likelihood, been playing her instrument since her age was in single digits. Over time that instrument becomes a best friend (and sometimes a worst enemy). A musician shares her life with her instrument; grows up and meets puberty and adulthood with her instrument; and in the end perceives her world through her instrument. If you’re a pianist, for example, you perceive the world through the sound, physiognomy, and repertoire of the piano; it’s inevitable, given the ten-of-thousands of hours a professional has spent camped out in front of the keyboard, enveloped in its sound-world and repertoire.

I had never really thought about this until I became romantically involved with a professional-grade piccolo and flute player (she did not call herself a “flautist” as it is an English term considered to be snotty by most American flute players). We were married from 2002 to 2009, when she died of cancer just months after giving birth to our youngest child.

In the time that we were together, I came to understand that someone could perceive music in a manner very different than me, as she perceived it through the flute. For example, when we’d go to hear the San Francisco Symphony she’d listen from the “top down” by focusing on the flute and piccolo players: Paul Renzi, Tim Day (her teacher), Robin McKee (also her teacher), Linda Lucas, and Catherine Payne. I came to understand that she “heard” the repertoire top down, through its flute parts, which was a revelation for me, like discovering that some people had a third eye in their naval.

She was also intimately familiar with a body of music with which I was almost entirely ignorant: flute music and music for wind ensembles of various sorts. It is wonderful stuff, much of it French given the traditional French cultivation of wind instruments (far beyond anything we see/hear in German and Italian music).

Among the composers she introduced to me was Leo Smit. Now, in my endless hubris I thought that I was aware of all the twentieth century composers worth being aware of, and I knew “Leo Smit” to be an American pianist and composer (born in Philadelphia in 1921) who had a long association with Igor Stravinsky and Aaron Copland. But as it turns out, there’s another Leo Smit, a composer and pianist who was born in Amsterdam 118 years ago today.

Among my wife’s repertoire was a sonata for flute and piano by this Dutch Leo Smit. She was practicing the flute part one day and I was gobsmacked: “what IS she playing?” Even without the piano part the music sounded great. Its graceful, dance-like quality and long-breathed melodies sounded vaguely French, but it’s jazzy pitch selection and crisp articulation sounded distinctly. . . what? I couldn’t place the piece at all. Thus my introduction to the Dutch Leo Smit.

He was born into a Jewish family; his paternal grandfather, Jozef David Smit, was a teacher and cantor in a synagogue. In 1924 Smit graduated from the Amsterdam Conservatory, the first student in its history to graduate “cum laude” in music composition. In 1927 he moved to Paris, where he met Igor Stravinsky and Maurice Ravel and came to be associated with Les Six, a group of composers that included Darius Milhaud, Arthur Honegger, and Francis Poulenc. The last piece Smit composed in Paris before returning home to the Netherlands was his Quintet for Flute, String Trio, and Harp. Again, superb: French sounding but not French; lyric, wry, rhythmically compelling. (While I’m waxing lyric over Smit’s music – particularly his music for winds – I would mention his Sextet for Wind Quintet and Piano of 1933, yet another work I discovered through the good officers of my flute-playing wife.)

Smit composed concerti and orchestral music (most of which was premiered by Amsterdam’s Concertgebouw Orchestra); a good bit of chamber music; piano music; vocal and choral music; and a film score. And he would have continued to compose and build his reputation and perhaps become one of the great composers of the twentieth century had not catastrophe intervened. Nazi Germany invaded the Netherlands on May 10, 1940; the principal Dutch forces surrendered four days later, on May 14. From that moment, the noose began to tighten on the Jews of the Netherlands.

Smit completed his Sonata for Flute and Piano on February 12, 1943. Just a few weeks later – in March of 1943 – Smit and his wife Lientje were summoned to the dreaded Nazi prison/collection point, the Joodse Schouwburg (Jewish Theatre), formerly known as the Hollandsche Schouwburg (Dutch Theatre) on the Plantage Middenlaan in Amsterdam. (Today the mostly ruined theater is again known as Hollandsche Schouwburg and is the site of the National Holocaust Memorial). On April 27 they were loaded on cattle cars and deported to the Sobibór extermination camp in eastern Poland. They reached the camp three days later, on April 30th and were murdered on arrival.

It appears that all of Smit’s music survived, despite the fact that the vast majority of works existed only in manuscript. Seeing the writing on the wall, he began – in the first days of 1943 – to distribute his manuscripts to non-Jewish friends and students, having first removed the title pages and his name so that they could not be identified has being his. The survival and resurrection of his music must be seen as something of a miracle. 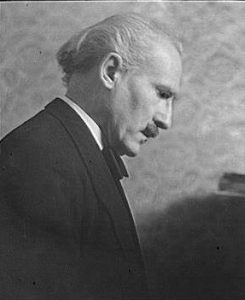 One additional piece of date-relevant of information, intended to lighten ever-so-slightly the emotional load of this post. On May 14, 1931 – 87 years ago today – Arturo Toscanini outright refused to open a concert at the Teatro Comunale in Bologna, Italy with the playing of the Fascist anthem Giovinezza. For this display of integrity he was, in his own words, “attacked, injured and repeatedly hit in the face” by a gang of blackshirted thugs. The Fascist leader, Benito Mussolini, was so incensed by Toscanini’s action that he had Toscanini’s phone tapped, had him put under surveillance, and confiscated his passport. Toscanini refused to apologize, and his passport was returned only because of international outcry over his treatment.

It’s just another reason – not that we needed one – to love Arturo Toscanini.